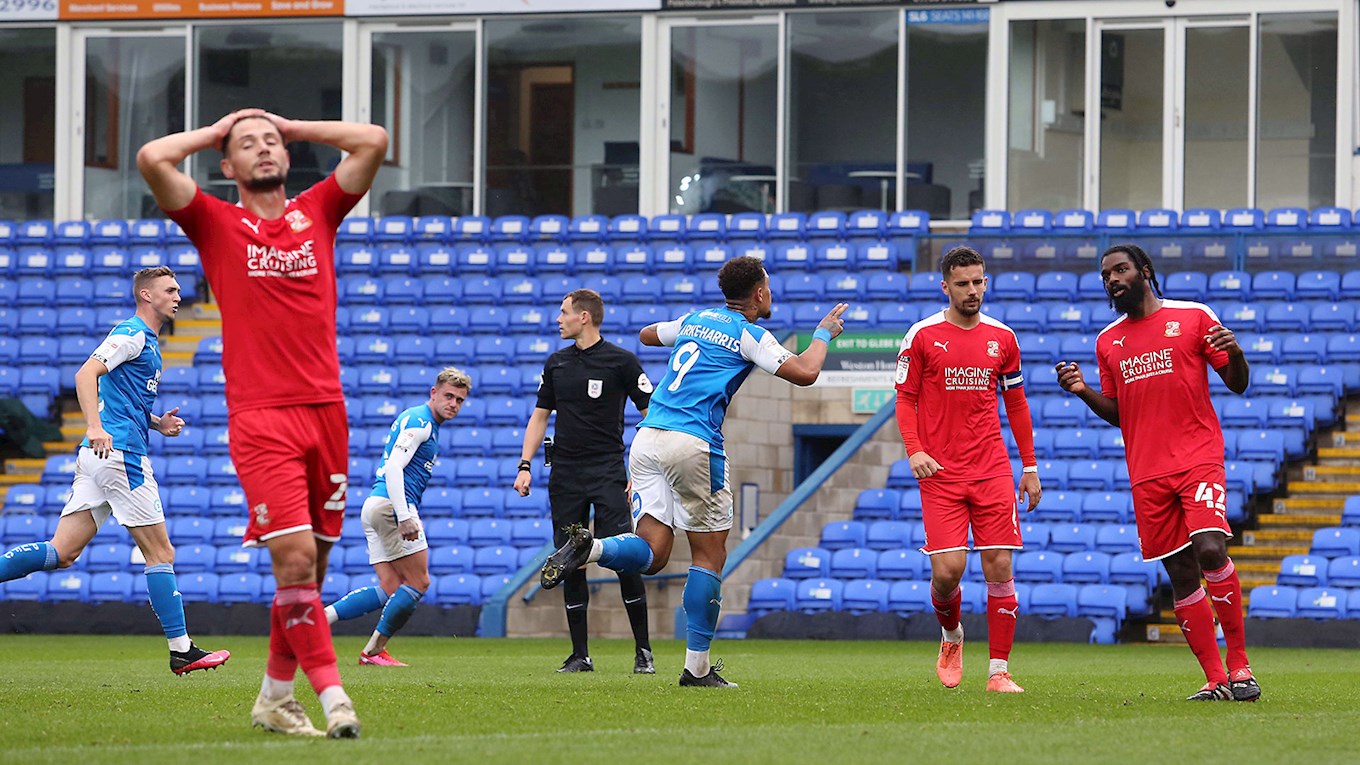 Peterborough United fought back from a deficit at home for the second time in a row as Darren Ferguson’s men recorded a 3-1 victory over Swindon Town at the Weston Homes Stadium thanks to a double from Jonson Clarke-Harris, his first goals for the club, and a strike from substitute Ryan Broom.

The visitors opened the scoring on six minutes as a low cross from Jordan Stevens was converted low into the corner by the onrushing Jack PAYNE. The goalscorer curled a free-kick over the crossbar on 10 minutes after Beevers was penalised for a foul.

On the quarter hour mark, Payne was denied by the legs of Pym after more sloppy play from Posh in possession with Swindon quick to pounce. Pym produced a fine stop to keep out the experienced Pittman on 22 minutes after Thompson overran the ball and was dispossessed in a dangerous defensive third.

Swindon were forced into a change on 27 minutes with the injured Fryers replaced by the experienced Jonathan Grounds. Szmodics saw an effort from a tight angle was tipped over by Kovar before Dembele headed the resulting corner over the top at the near post.

Szmodics was denied from close-range by Kovar on 34 minutes after an intelligent knock-down by Clarke-Harris following a diagonal pass. Swindon wanted a penalty on 42 minutes as Szmodics and Caddis collided but the referee awarded a goal back.

Baudry was cautioned for a foul on Dembele on the halfway line moments later. Deep into first half stoppage time, Kovar did well to shovel a low Szmodics shot away from danger. Posh levelled things up and in the process netted the clubs 4,000th league goal, Jonson CLARKE-HARRIS playing a one-two with Ward and finding the bottom corner with the aid of a slight deflection.

Moments later and Posh were nearly in front as a Dembele curler cracked against the bar and then the rebound from Clarke-Harris also hit the frame of the goal. In a frenetic start to the second period, the Robins came close to restoring their lead as Pittman was afforded space, but his fired straight at Pym.

Posh made a change on 58 minutes with Reece Brown replacing Reed in the midfield. Posh got their noses in front on 68 minutes from the penalty spot, CLARKE-HARRIS coolly converting from 12-yards into the bottom corner after Szmodics had been upended in the box by Baudry.

Posh made it 3-1 on 77 minutes and it was substitute Ryan BROOM who netted it, racing onto a pass from Dembele, remained calm under pressure and finished well past Kovar. Clarke-Harris curled over from the edge of the box after good work from Butler on the left-hand side as Posh pushed for a fourth goal.