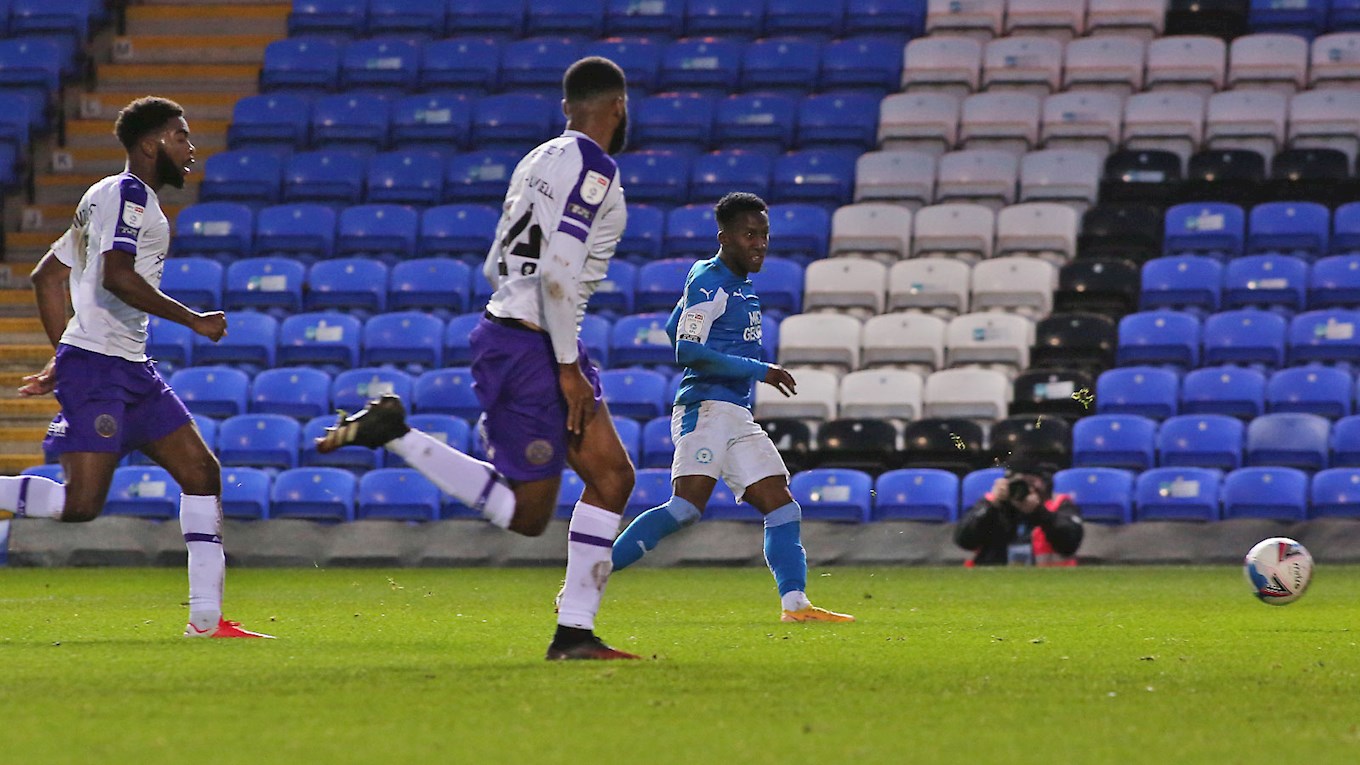 Posh moved top of the League One table with a 5-1 victory over 10-man Shrewsbury Town at the Weston Homes Stadium.

On the weekend of Halloween, it was a tackle that provided the horror as Shrewsbury Town midfielder Josh Vela saw red for a tackle on Siriki Dembele in first half stoppage time with Darren Ferguson’s men taking full advantage to secure a 5-1 victory with Dembele bagging his first hat-trick for the club.

Jonson Clarke-Harris continued his fine form with a goal from the spot while Jack Taylor also netted in a second half that truly could have seen Posh reach double figures and but for keeper Harry Burgoyne, that was a real possibility.

Daniel Udah saw a close-range volley blocked as the visitors caused a problem from a Charlie Daniels set-piece on nine minutes. The visitors had a couple of half chances through Aaron Pierre from set-pieces, but Posh found the breakthrough on 17 minutes, Dembele upended in the box by keeper Harry Burgoyne, who was cautioned, and Jonson CLARKE-HARRIS did the rest from the spot.

However, the lead didn’t last long as a deep cross into the box was powered home via the head of Joshua DANIELS at the back post. Dembele fired over on the half volley on 26 minutes after two clever passes from Brown and Ward created some space for the former Grimsby Town man.

Ward, who hit the bar and was denied by a superb save against Burton on Tuesday night, floated a central free kick over the crossbar on 31 minutes after Pierre was penalised for handball. Posh got their noses in front again on 42 minutes as a superb pass from Szmodics picked out DEMBELE, he took a few touches, drove into the box and rolled the ball into the bottom corner.

The visitors were reduced to 10 men in first half injury time as Josh Vela was shown a straight red card for a scissor-like challenge on Dembele.

Shrewsbury made a change at the break with former Posh loanee Jason Cummings replacing the experienced Marc Pugh. Szmodics had a good opportunity to make it 3-1 on 48 minutes after linking well with Dembele, but the former Bristol City man couldn’t keep his effort down.

Josh Daniels curled an effort wide from 25-yards moments later after cutting inside onto his right foot. Szmodics had the ball in the back of the net on the hour mark after a first time pass from Reed, but the offside flag curtailed the celebrations.

High fired high and over the crossbar on 63 minutes after substitute Cummings was allowed to take a long ball down on his chest. Posh made it 3-1 on 68 minutes, a fine pass from Szmodics picked out Ward down the right and his cross was turned into the back of the net via the inside of the post by DEMBELE.

Burgoyne made a fine stop to deny Szmodics after substitute Eisa did well to turn sharply in the box. Posh made it 4-1 on 78 minutes as a good pass from Butler picked out DEMBELE and he rounded the keeper and slotted into an empty net for his hat-trick.

Szmodics was cautioned for a foul on 83 minutes as the visitors countered at pace through the centre of the pitch after Posh gave away possession. Szmodics was again denied by Burgoyne on 85 minutes after a good cross into the box by substitute Idris Kanu.

Butler was next to be denied by the Shrews keeper as Posh toyed with their opponents in the final third with Dembele particularly thriving. It was 5-1 moments later as midfielder Jack TAYLOR rifled home a superb left-foot shot into the bottom corner from just outside the penalty area.