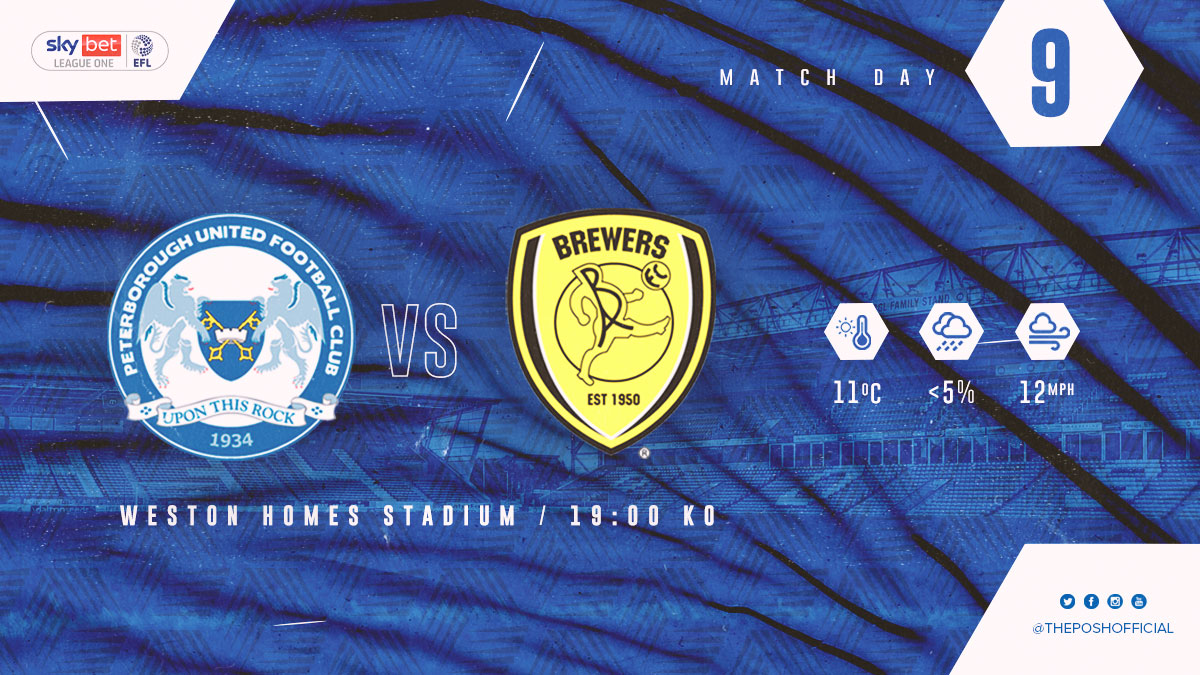 Peterborough United welcome Jake Buxton’s Burton Albion to the Weston Homes Stadium on Tuesday evening (7pm), the second time the two sides have meet this season with this contest taking place in Sky Bet League One.

The Brewers arrive on the back of a 1-1 draw with AFC Wimbledon, but find themselves in the relegation zone in the fledgling League One table. Posh and Burton faced off in the EFL Trophy earlier in the campaign with the tie ending 3-3 before a penalty shoot-out success for Darren Ferguson’s men.

Posh have won five league games on the bounce and six victories in all competitions in succession following a 2-1 away win at then league leaders Hull City. Jonson Clarke-Harris and Siriki Dembele were on target at the KCOM Stadium.

Posh attacking midfielder Sammie Szmodics has been rated as 70-30 to be fit to play (if selected) after completing two training sessions since Saturday. Szmodics has a slight hamstring concern and missed the win against the Tigers.

Ricky-Jade Jones is the only confirmed absentee with the teenager expected to be out until Christmas with a leg injury. Meanwhile, Burton are expected to be without experienced pair John Brayford and Michael Bostwick due to injury.

Niall Ennis is pushing for a start after joining on loan from Wolverhampton Wanderers but Kane Hemmings was on target at the weekend so could keep his place.

Although Michael Bostwick is sidelined due to injury, Burton do have another former Posh player in their squad in the form of Colin Daniel. Daniel created the equaliser for Hemmings against AFC Wimbledon and can be a threat with his delivery from the left.

“I believe Burton are in a bit of a false position in the league table. They have some good players and they showed that when we faced them in the trophy not so long ago. I expect a lot of those players will be in their squad on Tuesday as they were quite strong against us. They have good delivery and we must not let our standards slip and that is something I have been stressing to the players since Saturday,” Darren Ferguson said.

Season ticket holders will have received a code for the game in the past 24 hours allowing them to watch the game on iFollow. Match passes are available to purchase for £10. To purchase a pass, please click the link below.

The match referee is Paul Howard.