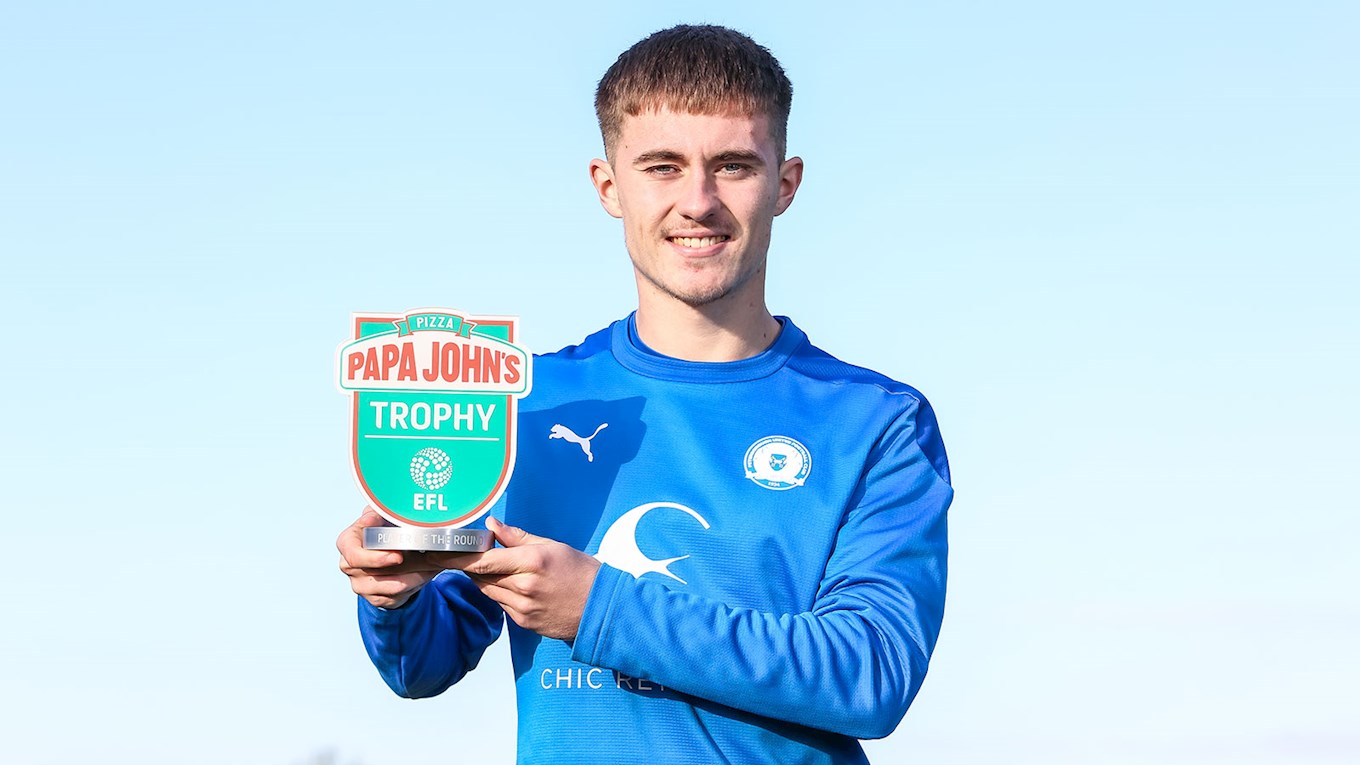 Posh Starlet Wins Papa John’s Trophy Player Of The Round

Honour for Posh youngster as he scoops Player of the Round award for exploits in the Papa John’s Trophy.

Peterborough United’s Flynn Clarke has been awarded the Papa John’s Trophy Player of the Round, following a highly impressive Group Stage, which saw the 17-year-old score three goals in three games.

The attacking midfielder enjoyed three games to remember in the Group Stages as he shone for Darren Ferguson’s side as they progressed to the knockout stages of the competition.

The 17-year-old grasped the opportunity handed to him by manager Darren Ferguson, finishing the Group Stages with three goals in as many games, including a memorable 25-yard-piledriver against Cambridge United.

“I’m over the moon,” Clarke said, speaking to the EFL upon receiving the award.  “Especially to only be 17 years old. It’s my first trophy in professional football, so it’s a memory that will stay with me for the rest of my life and a nice memory for me and my family."

Having made his senior debut in Round One of the Carabao Cup earlier in the season, Flynn continued to impress and it wasn’t long before Ferguson handed him a second appearance, this time in a Papa John’s Trophy Group Stage game against Burton Albion. After being named in the starting line-up, it took the teenager just three minutes to score his first professional goal for the club.

“It happened so quickly into the game,” he recalled. “I remember the ball being crossed into me and I remember just thinking that I should try and get it on target. The defender was in front of me so I couldn’t actually see the goal, so I didn’t even realise I’d scored at first!

“It was only when everyone started celebrating that I realised. I was shocked! Obviously afterwards I thought about it a lot. I knew that all my family were watching at home, so it was a massive buzz when it sunk in."

Prior to his string of appearances in the Papa John’s Trophy, Clarke was handed a debut off the bench in Round One of the Carabao Cup, following an impressive pre-season with Peterborough. Having joined the club as a nine-year-old, pulling on the Peterborough shirt for the first time and making his debut is a moment the 17-year-old academy graduate will never forget.

“I was hoping to just get into the squad as a spare substitute at some point,” Clarke revealed. “But when the gaffer pulled me into his office the day before the game to tell me I was going to be on the bench for Round One of the Carabao Cup I was completely speechless. I didn’t know what to say, I was over the moon.

“It was a nice feeling in so many ways because you know that the hard work, you’re putting in is being noticed. As a young player that’s a good feeling. Then during the game, he just turned to me and said, ‘you’re going on in five minutes, go and get warm.’ I remember having butterflies in my stomach.

"It was always my goal. As soon as I joined Peterborough as a nine year old, I’ve always said to my family, ‘I’m going to make sure that I play for Peterborough United and get into the first team.’ It has always been the aim to make my senior debut for this club, play in cup games, score goals, everything.

"To have achieved that this year for me is a huge achievement and hopefully there are many more games to come down the line."

The EFL has a long-standing tradition of developing young, exciting, home-grown players, many of which start their journey in the EFL or EFL competition, as it continues to provide the perfect platform for young talent to prosper. Clarke is just one of many to take his chance.

“All cup games are huge opportunities for us youngsters,” he admitted. “That’s our time to shine, when there’s squad rotation. It’s up to us to prove whether or not we can handle that and personally I think I’ve proved that I can. I saw these games as an opportunity, and I think I’ve taken it."

Two League One appearances since would suggest he has done just that. “League One is so competitive. You’re playing against grown men who are built with such physicality and at their peak. I am only 17, I’m still growing!

"It’s physically and mentally tough, but Peterborough is a really good club and we’ve got a good group of lads here. Our team chemistry issues good, we look after each other and as a youngster that’s important for me. When I came on against Hull City, the players were encouraging me and looked after me out there, which is what football’s about.”

Manager Darren Ferguson has tipped Clarke to be the club’s breakthrough player this season, and as a manager Ferguson is certainly not averse to throwing young players in at the deep end.

“He’s been really supportive and helped me,” the 17-year-old said, speaking about Ferguson. “I’ve been at the club a long time and so has he in different spells, but he’s been important to my development. We often speak one-on-one, and he tells me what I should or shouldn’t do, what I’m doing right or what I’m doing wrong. He’s got a good way of telling you things that help you as a person and praise when it’s deserved, but at the same time he’ll give criticism out which I think is important in football. You need that balance and that’s something as a young player you have to deal with. He’s a brilliant manager and I’m thankful for everything he’s done so far to get me into the position that I’m in now."

Peterborough face West Ham United U21 in the next round of the Papa John’s Trophy, and following the recent announcement to allow a small number of fans back into stadiums, the fixture could be one of the first to be played in front of a reduced crowd.

As well as searching for Wembley glory in the Papa John's Trophy - a competition they won in 2014 - Peterborough currently sit in second place in the League One table, having had an impressive start to the 2020/21 campaign.

“For me, I just want to keep proving myself, my ability and my worth to the gaffer and everyone around the club. I want to show why I’m here and that I’m good enough to be here."