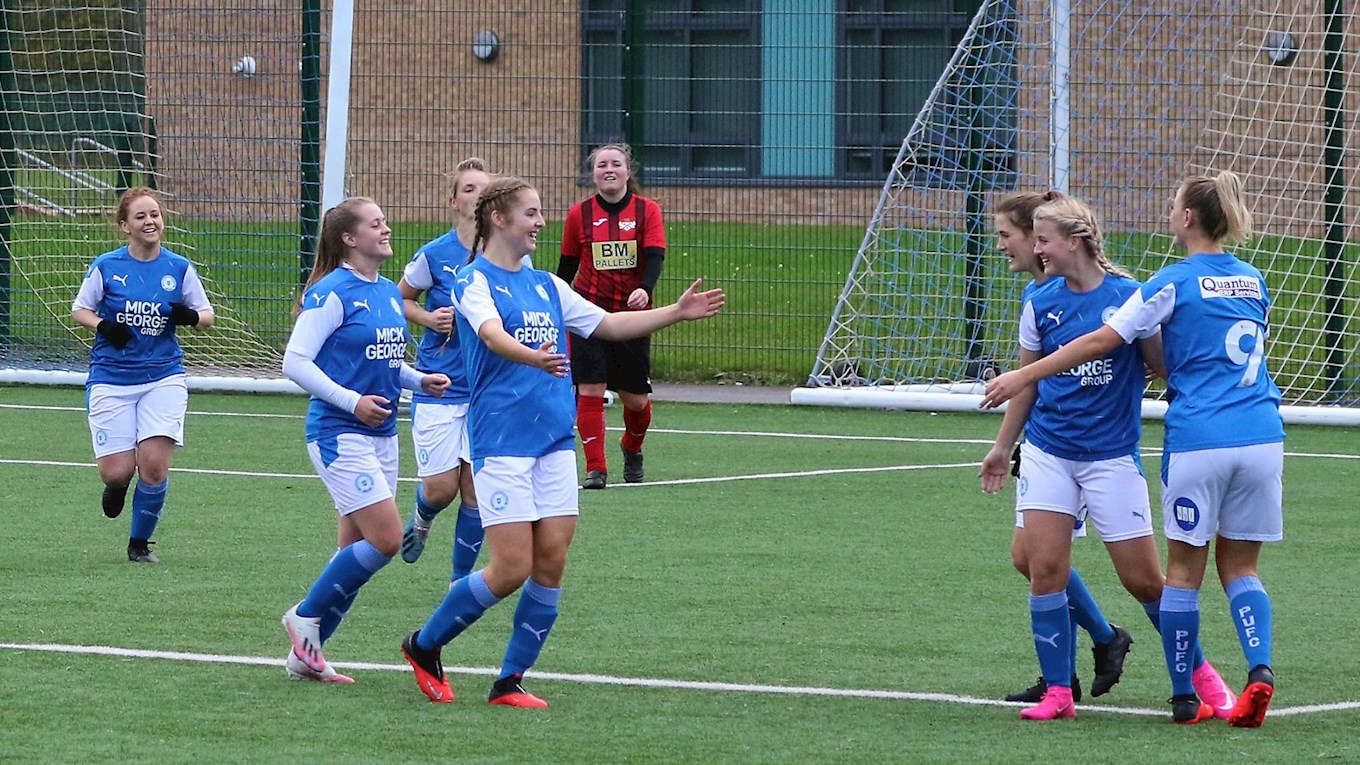 O’Neill At The Double For Posh Ladies

The Posh Ladies moved to the top of the table with a 6-2 home victory on Sunday afternoon.

Arriving at a windy Mick George Training Academy, it was another week when it was important to respond to a result and performance that fell below expectations the week before. With one win and two defeats from their first three league matches, Kettering Town were the opponents.

Posh came out of the blocks firing on all cylinders and mounted several attacks before finding the breakthrough on three minutes; strike partners Keir Perkins and Donna McGuigan combined and it was MCGUIGAN who fired home.

On 13 minutes Posh were two ahead. Kettering attempted to clear their area, but it fell to Stacey MCCONVILLE on the edge of the box and she lifted the ball over the keeper into the roof of the net.

Posh’s third came on 25 minutes and it was a superb pacey passing sequence out of defence that found Perkins wide out on the left and she squared a pass straight onto the boot of O’NEILL to fire home.

Kettering pulled one back on 36 minutes but the bulk of the first period had been played out in the Kettering half. The deadly strike combo of Perkins and McGuigan struck again for Posh’s fourth on 54 minutes. This time it was McGuigan the provider and a deft lob finish over the keeper from PERKINS.

Around four minutes later and it was 5-1 to Posh. Quick movement and thinking from O’Neill was seen by corner taker Hannah Pendred and O’NEILL lashed home from just inside the box for her second of the game.

On 66 minutes Posh’s scoring for the day was completed when a deep cross from wide was sent in by Megan Parrett and was turned rather spectacularly into her own net by a Kettering player for Posh’s 6th.

In the dying minutes of the game Kettering pulled another back but when the final whistle blew it completed a dominant display from Posh and a thoroughly deserved three points stayed in Peterborough.

Peterborough United Ladies Reserves made it four wins out of for with a hard fought 2-1 win against Northampton Town Ladies Development. The Ladies were expecting a much harder game both tactically and physically than their 4-1 win from last week against the same opponents and they were not disappointed. Northampton Town Ladies dominated the early play but struggled in the final third against some resolute Peterborough defending and some great clearances by Posh goalie, Katie Cooper.

In the second half Northampton Town pulled a goal back in the 64th minute to make it 2 -1. Peterborough United continued to look for their third goal with Destiny Makanjuola hitting the crossbar and both Emily Smith and Aliyah Palmer going close but neither team could get that potentially important goal. This was a battling away performance in difficult conditions from a Ladies Reserve team that played with passion and determination.