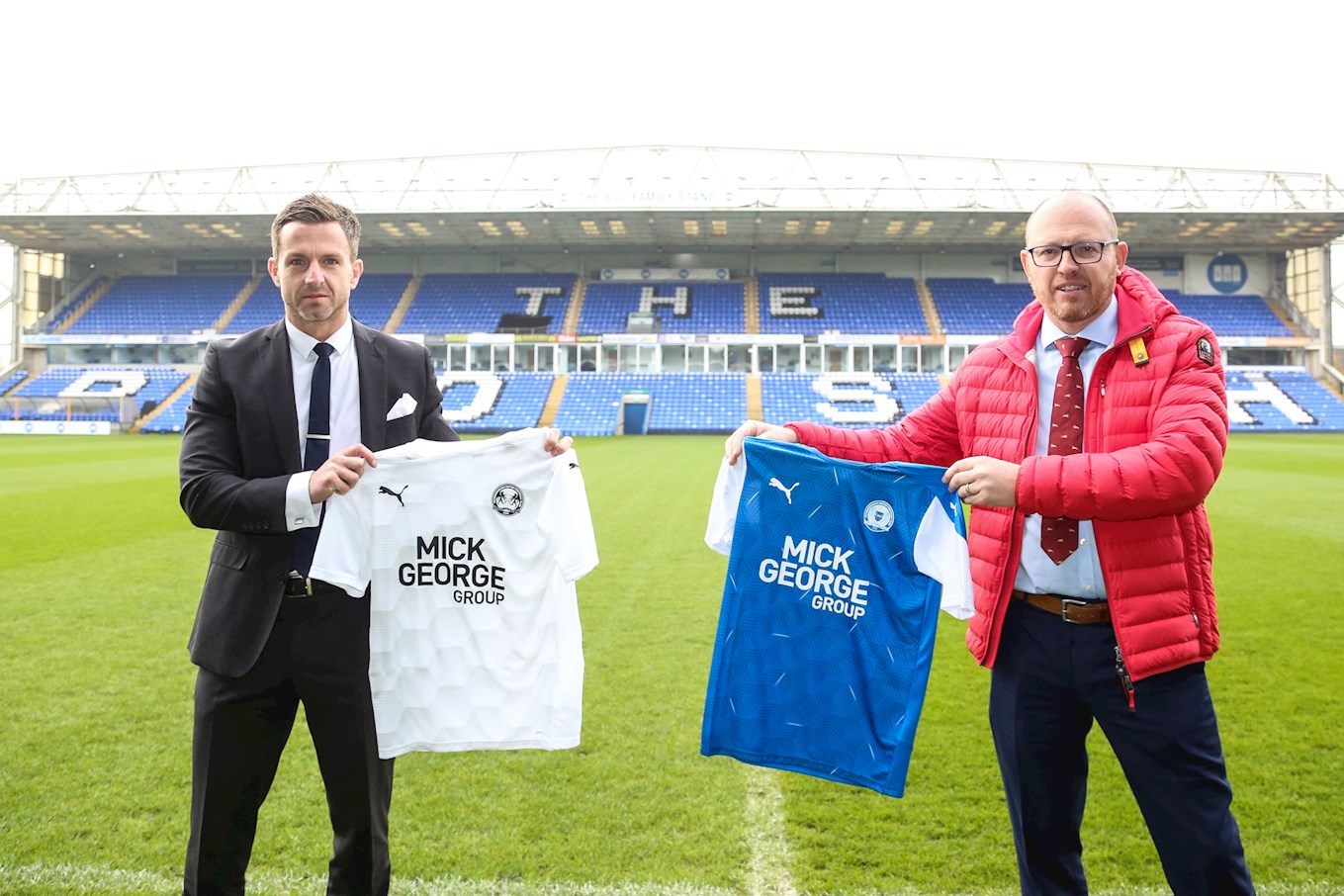 Peterborough United are delighted to announce that the Mick George Group will become the Club’s longest serving shirt sponsor after extending their partnership with The Posh.

The extension, which will run until 2023, will see the collaboration reach nine-years.

The local company, one of the area’s leading suppliers to the construction industry, initially became The Posh’s main shirt sponsor ahead of the 2014/15 campaign and has ever since, been a valued partner of the Club in varying capacities beyond the main contractual promise.

The agreement will see the Mick George Group logo printed on all home and away replica shirts as well as those worn in competitive action by the club at all levels; this includes the first team and all youth academy teams.

Since their first involvement, the Company has shown tremendous support and backing for the Club with a number of significant projects, events, fan engagement initiatives and Academy Training facility sponsorship - most of which are continuing despite the current challenging circumstances.

During the partnership to date, the club has experienced a number of memorable moments which will go down in Posh folklore.

Most notably, standout occasions include the various FA Cup ties whereby The Posh went toe-to-toe with some of English football’s goliaths; travelling too Villa Park and Stamford Bridge, to take on Aston Villa and Chelsea respectfully, as well as other fixtures against West Bromich Albion and Leicester City.

Through continuous offerings of hospitality, discounts, giveaways, competitions and fun entertainment, not least Mick the Skip mascot and the Half-Time Skip Challenge, The Mick George Group have played a pivotal role in embracing the wider ‘fan activation programmes’ that the club participates in.

Commercial Manager at Peterborough United, Alex Harris said: “It has been a pleasure dealing with Jon and everyone at the Mick George Group over the past six years and we look forward to extending the partnership through until 2023. The company have been pro-active with their investment and have assisted the club with a range of different projects during the six years.

“Whether that be through the sponsorship of the training facility at Nene Park or through the signage and facilities at the stadium, the Mick George group have been first class. When you engage with a business about involvement at a football club, part of the relationship is based on passion for the partnership and they are hugely passionate about the football club and the community it supports.

“We are thrilled that they have agreed to extend the partnership, particularly at a time where the global picture is so unsettled. We can’t wait to welcome the hard-working team at the Mick George Group to a game at the Weston Homes Stadium, when it is safe to do so, to celebrate this agreement properly.”

Jon Stump, Joint CEO at the Mick George Group commented: “We have built a genuine and valued affinity with both the club and supporters since we became the front of shirt sponsor in 2014 and consider that we are seen as much a partner and fellow fan as opposed to just a corporate sponsor.”

“Through our association with the club, which dates back well before the shirt sponsorship commenced, we have regularly invested in the club in different capacities and recognise the importance in doing so at the present time, to help provide the Club and fans with some much-needed stability in the current climate.”

“The Club is a critical hub for the community, representing the togetherness that exists in the City. That ethos is something that aligns with our business philosophies and has been a key factor in our decision to renew despite economic uncertainty.”

“The Club should be applauded for the way it has conducted itself in the current circumstances.”

“We are proud to be the club’s front of shirt sponsor and hope that by signing a three-year extension to the current deal, reflects the solidarity that has been built between the Mick George Group, Peterborough United and its supporters. More importantly, we want to do what we can to help the club fulfil its full potential and experience many more memorable occasions in the future.’’

“We always considered our partnership with the Club was for the long term and share their vision of building a great football club that remains a part of the community at all times.

The proposed move to the new stadium will be a wonderful and exciting development of this vision and one which we hope to play a part.”