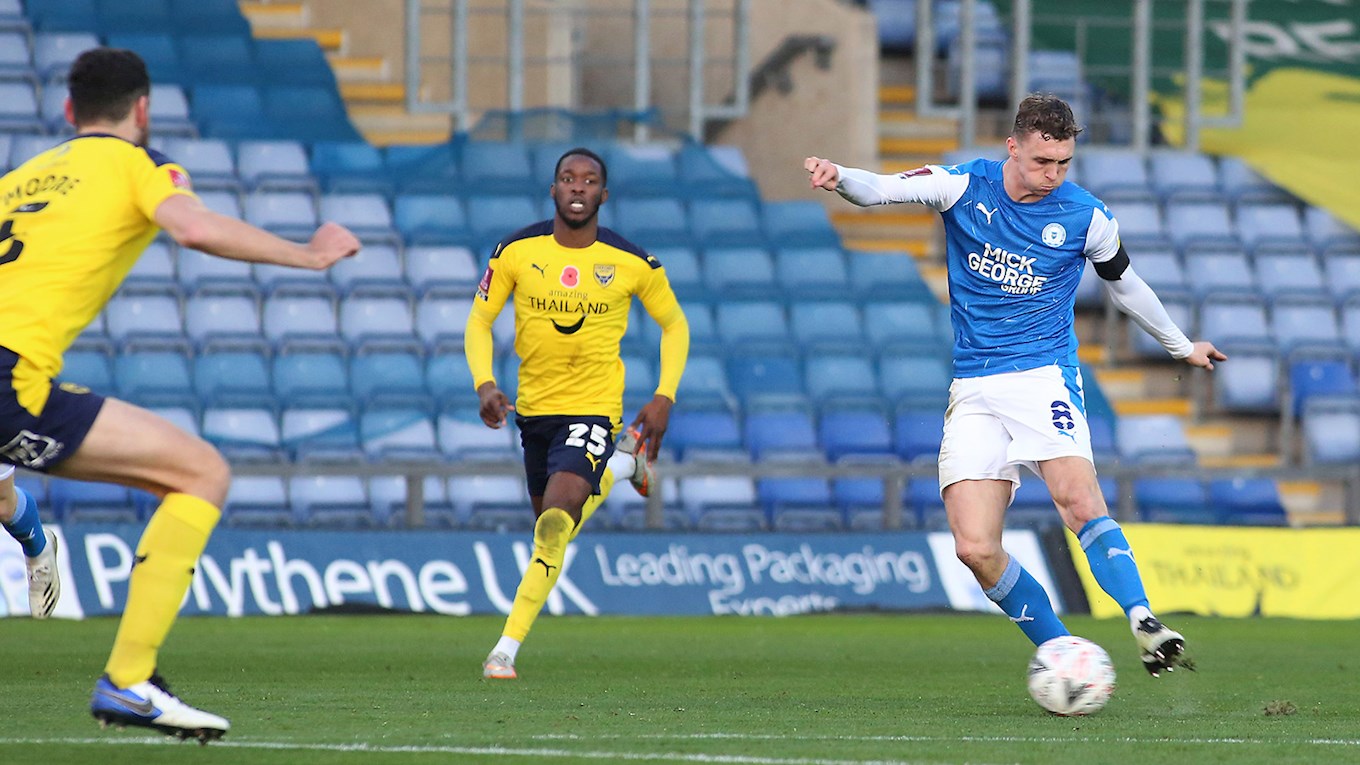 Posh are into the second round of the Emirates FA Cup after 2-1 victory at Oxford United.

Peterborough United made six changes to the starting line-up, lost Nathan Thompson to injury and played over 50 minutes with a 17-year-old at the heart of the defence, but are into the hat for the second round of the Emirates FA Cup following a 2-1 victory at fellow League One outfit Oxford United.

Darren Ferguson’s men made a bright start with Mo Eisa’s pacy cross just eluding the onrushing Taylor and striking the full-back Forde before going behind for a corner kick. Eisa then sent a 25-yard curler inches past the post as Posh continued to make the early running at the Kassam Stadium.

Elliott Moore, who netted twice on Tuesday night against Rochdale, headed over from a free-kick before Sam Long was cautioned for a foul on Dembele by the touch-line. Christy Pym did well to beat out a fierce drive from Sykes on 16 minutes, but in truth, Hall should have done far better with the rebound, firing over on the half volley from close-range.

On 22 minutes, Posh opened the scoring as a drilled pass from Reed was poorly defended by Ruffels, allowing Siriki DEMBELE to nip in, he took a touch and drilled the ball low into the bottom corner. Oxford boss Karl Robinson was cautioned for his rather vocal protests as he challenged the initial decision with the coaching staff believing Dembele to be initially offside when the pass was played.

Matty Taylor had a good chance to level on 32 minutes from a cleverly worked free-kick but on the volley, over his shoulder, he fired over the crossbar. Pym was well placed to keep out Moore from a Hall delivery on 37 minutes as Oxford pressed for the leveller.

Posh were forced to make a change just before the break with Ronnie Edwards, at just 17, replacing Nathan Thompson as part of the three-man defence. In first half injury time, the hosts got themselves level as an in-swinging free-kick was poked home from close-range by Josh RUFFELS.

Taylor flicked an opportunity from close-range wide of the target for the home side two minutes after the break. Stevens did well to push behind a snapshot from Jack Taylor at the other end after his initial left-foot effort was blocked.

Posh got their noses in front again just after the hour mark, a patient build-up down the right with Broom, Mason and Reed involved, eventually TAYLOR let fly with his left-foot, it appeared to take a slight nick before finding the bottom corner.

Pym did well to beat out Shodipo’s driven effort on 88 minutes as the Oxford dangerman cut inside onto his right foot.