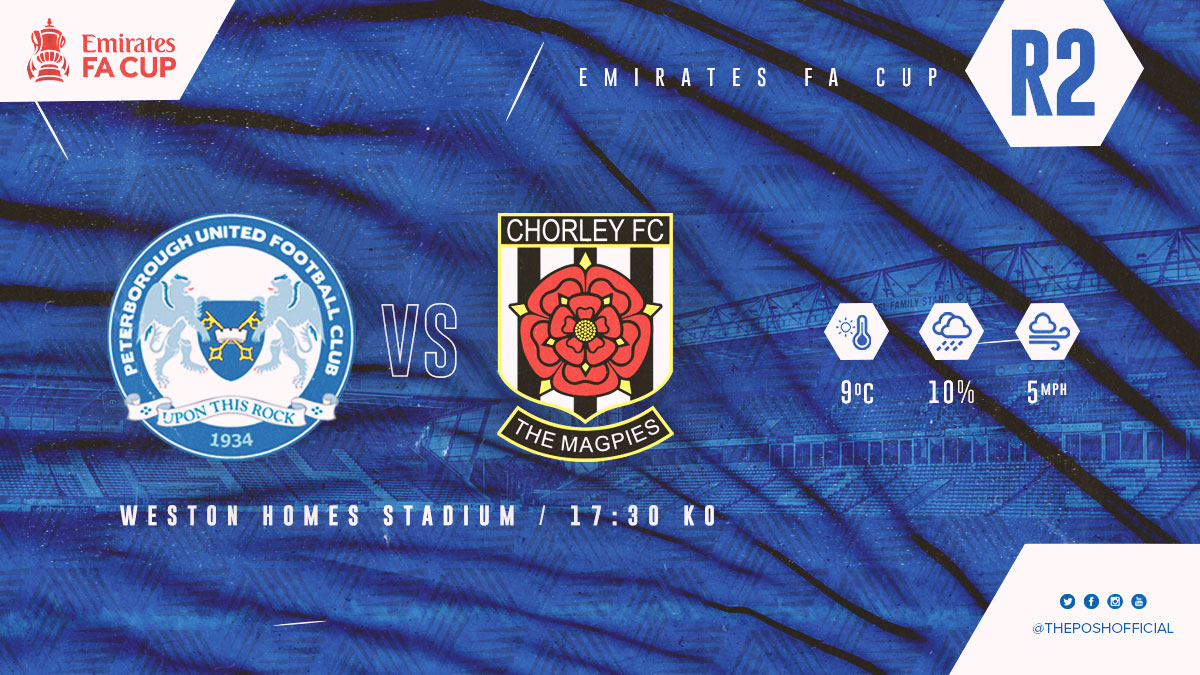 Match preview for Peterborough United vs Chorley on 28 Nov 20

It is Emirates FA Cup second round action for Posh on Saturday evening.

Peterborough United welcome non-league Chorley to the Weston Homes Stadium on Saturday evening (5.30pm) in the second round of the Emirates FA Cup with the tie televised live by BT Sport.

Chorley made headlines in round one of the competition when they came from 2-0 down to beat Wigan Athletic 3-2 at the DW Stadium. Posh reached this stage following a hard fought 2-1 victory over fellow League One side Oxford United at the Kassam Stadium with Siriki Dembele and Jack Taylor on target.

Posh have received good news from the scan on striker Jonson Clarke-Harris with his ankle not showing any ligament damage or break. He hasn’t been ruled out of the contest, but manager Darren Ferguson said on Thursday that there was still a little bit of swelling around the affected area.

Defender Nathan Thompson and young striker Flynn Clarke both trained on Thursday and came through with no ill effects, but Thompson is unlikely to feature. Ricky-Jade Jones is still on track for a return before Christmas following a leg injury while Joe Ward has undergone his knee operation and will be side-lined until the festive period.

Harry Cardwell is a major fitness doubt for Chorley after limping out of last weekend’s fixture with Hereford United. Other than him, the Magpies have no injury worries and have added to their squad with the acquisitions of Adam Henley and Willem Tomlinson, from Bradford City and Mansfield Town respectively. Both have played for Blackburn in the past with Henley making two appearances for Wales. They are expected to be available this weekend as they are not cup tied.

“Chorley showed in round one that they can cause an FA Cup shock and let’s be honest, that is why the TV cameras are going to be at the Weston Homes Stadium on Saturday, they will be looking to see if they can do it again. Certainly, that first round victory is a good reference point for the players because Wigan are a good side. We need to impose ourselves, do not let our standards slip, build on Tuesday’s performance and play at a tempo. I will not be making as many changes as I did in the first round of the competition,” Darren Ferguson said.

“It does my head in when I see FA Cup ties and the teams who are the underdogs don’t really show what they are about. They just sit in and then end up conceding and then conceding again. My mindset is not to do that. Sometimes as a manager you can’t help but see the game evolve in front of you and it might be that we are sitting in quite a bit.

“But we are certainly going to try to start the game well and put them under a little bit of pressure early on and see how they cope with that. It’s all well and good, though, me telling people what we are going to do – you just don’t know how the game is going to evolve. You just don’t know what is going to happen. A free-kick, corner, throw-in can just change the tempo and fluidity of the game.

“Our game plan is to start the game well, test them and see how it goes. If they start to see a lot of the ball, start to get through us then we will re-adjust. We will have plan A, B and C,” Chorley boss Jamie Vermiglio said.

There are no replays in the FA Cup with extra time and penalties if required on Saturday.