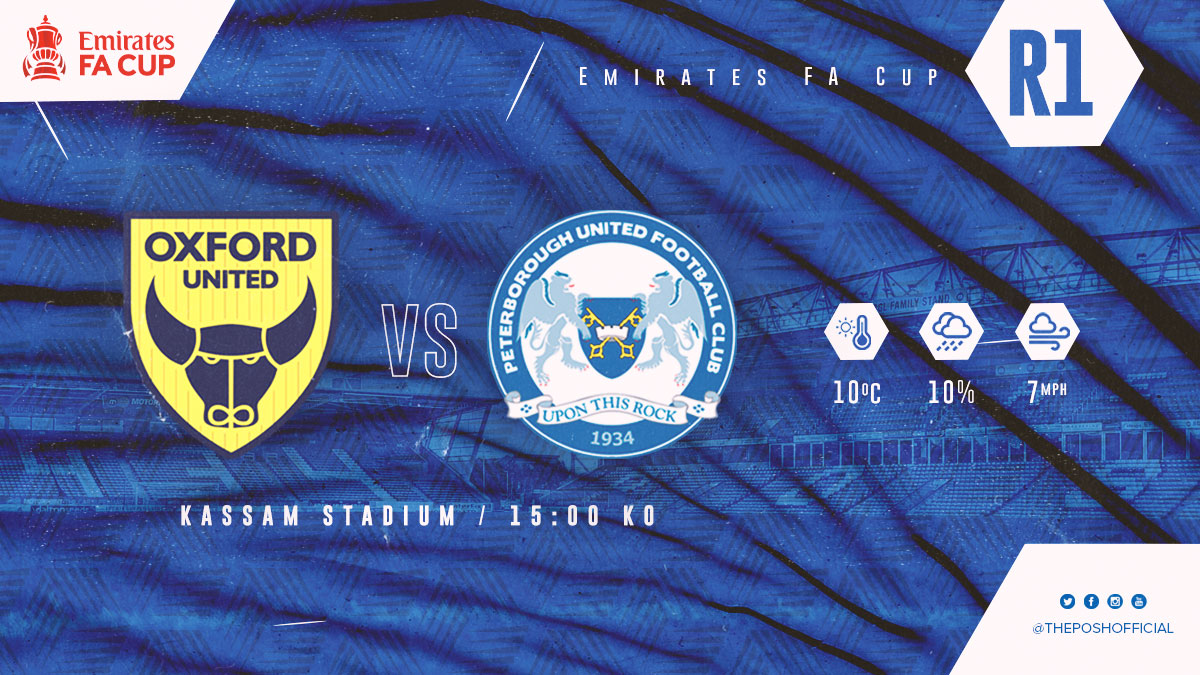 Posh make the trip to the Kassam Stadium this weekend.

Peterborough United get a break from Sky Bet League One action this weekend as attention turns to the first round of the Emirates FA Cup with Darren Ferguson’s men travelling to the Kassam Stadium to face Karl Robinson’s Oxford United (3pm).

The two sides met in the first round of the EFL Cup last season and have already come face to face in the league with Posh coming out on top at the Weston Homes Stadium. Both sides could make changes with the busy schedule, but both teams will be desperate to make it through to the second round draw on Monday evening.

Posh are without the services of teenage striker Ricky-Jade Jones due to injury. Manager Darren Ferguson is likely to freshen up his side but has given no indication of how many changes he will make other to say it will not be ‘wholesale alterations’.

Alex Gorrin has delivered a boost to Oxford United after concerns over a hamstring injury were played down. The midfielder was forced off late on in Tuesday’s 3-1 win against Rochdale, his 50th appearance for the club. There were worries it could lead to another spell on the sidelines for Gorrin, who missed six weeks at the start of the campaign with an ankle problem. James Henry (knee) and Sean Clare (hip) have been managing their fitness and were due to be rested even before their issues flared up against Dale.

“I think both myself and Karl Robinson were probably a little gutted to draw each other. I know they have the home advantage and that is the first thing you look for, but we all wanted probably a lower league team at home at this stage in the competition. However, it is what it is, it is an opportunity for us to freshen things up, which we will do, but make no mistake we want to win the game and I am looking forward to the game,” Darren Ferguson said.

“I have a lot of respect for the job that Darren Ferguson has done at Peterborough and they have a lot of player who can hurt you. I think there is a bit of mutual respect for both clubs, certainly from within. I am sure they will freshen things up and you know that we will too, but we want to win the game and get through to the next round,” Karl Robinson said.

The club are pleased to confirm that supporters will be able to watch the game live on iFollow with match passes available to purchase for £10 here;

There are no replays in the FA Cup this year so the tie must be played to a finish with extra time and penalties if required.

The match referee is Benjamin Speedie.