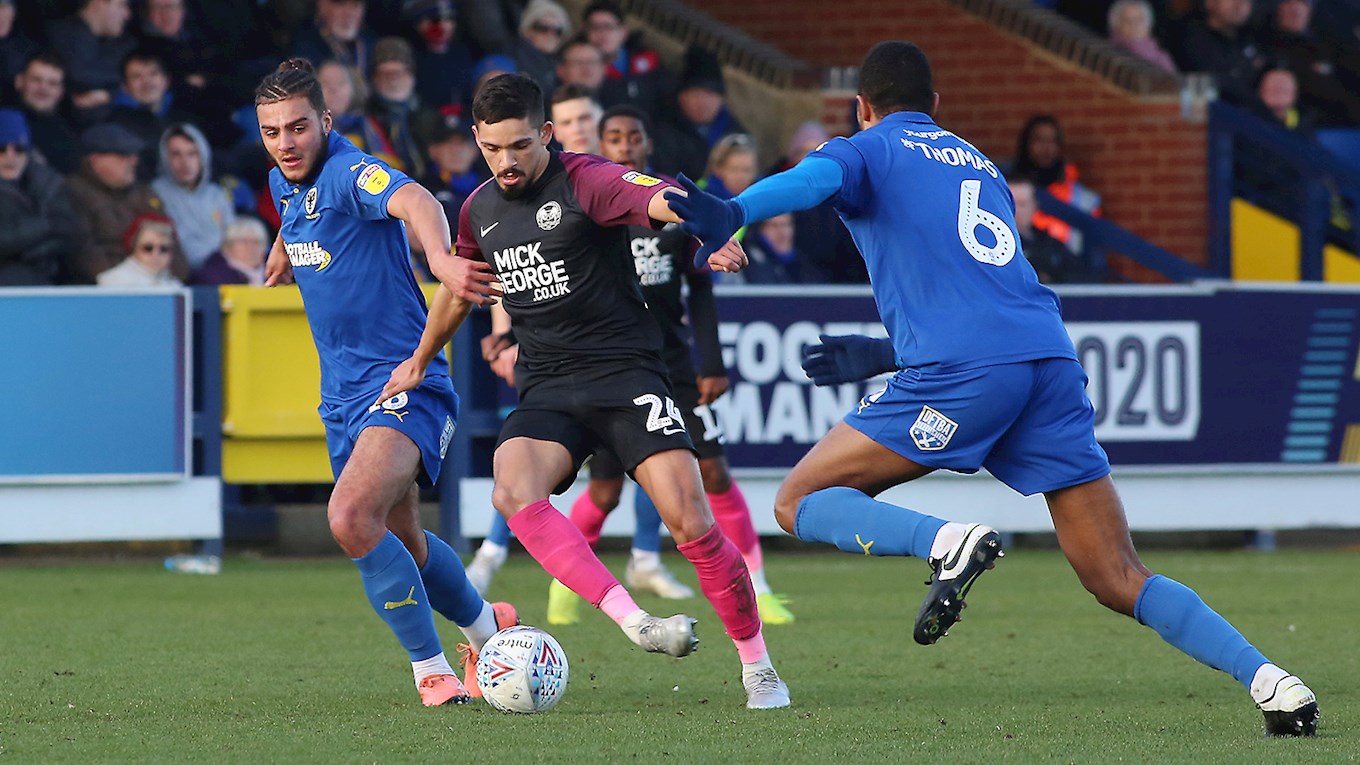 Despite a spirited second half, Posh suffer defeat at the Cherry Red Records Stadium.

Peterborough United suffered a 1-0 defeat at the Cherry Red Records Stadium as referee Darren Drysdale took centre stage, failing to spot an obvious penalty kick and a number of other decisions while Posh were guilty of missing a string of other opportunities as a Joe Pigott goal was the difference in League One.

Posh made a bright start and had the ball in the net on eight minutes through Mo Eisa following a clever through ball from debutant Sammie Szmodics, but the offside flag was raised and the goal was chalked off.

Shane McLoughlin side-footed into the side-netting on the volley on 16 minutes for the home side after a deep Pinnock cross. Toney sent an ambitious 45-yard effort wide of the target moments later after spotting keeper Trott off his line.

Christy Pym produced a fine stop to keep out a rasping effort from Sanders on 25 minutes after the midfielder let fly from 25-yards out of nothing. Louis Reed sent a shot from 30-yards over the crossbar on 27 minutes after a Mason cross was only half cleared by the Dons back-line.

A corner kick from Reed was fumbled by Trott on 35 minutes but Taylor couldn’t flick the ball on target with the volley, clearing the crossbar under severe pressure from Thomas. The Dons were forced into a change six minutes before the interval with Anthony Wordsworth replacing the injured Max Sanders.

Pym produced another good stop to keep out a curling effort from Pinnock on 43 minutes as the Dons came close to the breakthrough. Pym did well to tip a Sorensen header over the crossbar two minutes after the re-start as Bennett appeared to be blocked off in flight of the set-piece.

Pym was well placed again on 54 minutes to keep out a shot on the turn from Pigott as the Dons continued to press. The home side broke the deadlock on 57 minutes as a low cross into the box picked out PIGOTT and his shot on the turn found the bottom corner.

Posh made a change moments later with Joe Ward replacing Reed in midfield. Substitute Ricky-Jade Jones was a whisker away from levelling the scores as a clearance from the keeper struck him, rebounded towards goal, but as it spun, it hit the base of the post before Toney fired the follow-up into the side-netting.

On 69 minutes, Posh carved out a good chance for Szmodics, Toney cushioning a header into his path expertly but the on-loan Bristol City man couldn’t keep his effort down. Toney then headed wide from a Ward centre on 70 minutes as the Dons keeper Trott began to time waste from the resulting goal kick.

Szmodics dragged a shot wide of the far post on 75 minutes after driving into a bit of space following a clever Butler pass. Posh had appeals for a spot-kick turned down on 77 minutes as he appeared to be upended in the box by Sorensen.

Szmodics sent a low shot a whisker past the post on 79 minutes after Toney was again manhandled in the box. Trott produced a good stop to tip over a fierce strike from Toney on 80 minutes after a cross from Brown to the back post.

Toney glanced a header from a Ward cross wide on 87 minutes as Posh continued to press for a leveller. Toney and Jones both saw efforts blocked while Szmodics drilled a shot inches past the post as the game entered six minutes of added time.