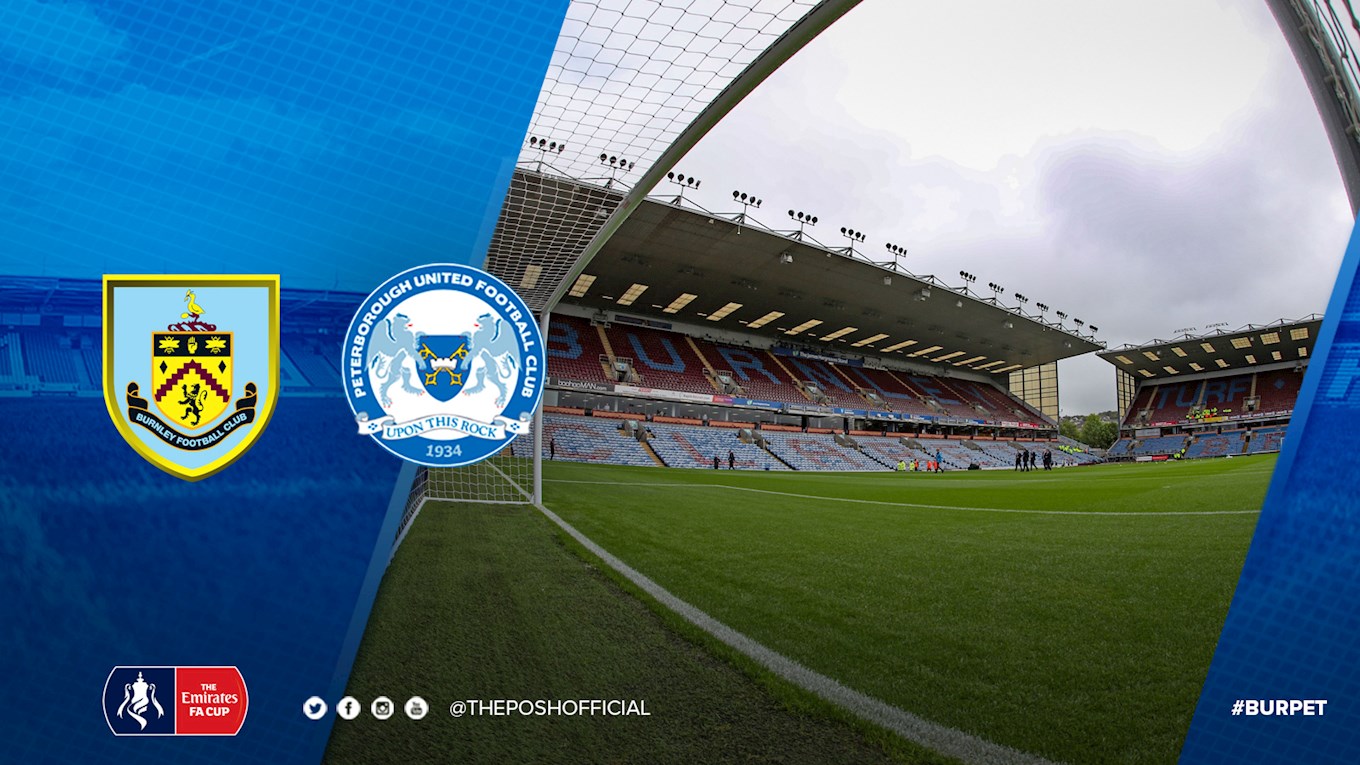 Match preview for Burnley vs Peterborough United on 04 Jan 20

The Emirates FA Cup is back with Posh heading to Premier League side Burnley in the third round.

Peterborough United make the journey north to face Burnley at Turf Moor in the third round of the Emirates FA Cup on Saturday lunchtime (12.31pm kick-off) looking to bounce back from a tough festive period that has seen Darren Ferguson’s men lose three games in a row.

It is the same run of form for the Clarets who were beaten by Aston Villa last time out in the Premier League over the New Year period. Burnley are managed by Sean Dyche and have belied their obvious budget restraints to compete admirably at the highest level since returning to the Premier League under Dyche.

Posh welcome back defender Frankie Kent from suspension and he could feature although boss Darren Ferguson was quick to praise his centre back partnering of Mark Beevers and Rhys Bennett for their performances in defeat at Lincoln City on New Year’s Day.

Midfielder Siriki Dembele will serve the first of a three-match ban following his red card against the Imps, but Serhat Tasdemir could return after a hip problem. New signing Reece Brown goes straight into the squad following his arrival from Huddersfield Town on-loan until the end of the season.

Burnley boss Sean Dyche has confirmed he will make changes to his starting line-up but will play a ‘strong side’ although defender Ben Gibson is not quite ready. Aaron Lennon, Joe Hart and James Rodriguez could start while Danny Drinkwater has returned to parent club Chelsea following a loan stint in Lancashire.

“Sean Dyche has done a fantastic job. I get on well with him. When you look at what he has achieved when you take into considerations the budget compared to everyone else in the league, it is remarkable and he deserves enormous credit. I am sure they will make changes, but whatever side they field will have quality.

“We will have to defend our box well, both in open play and at set-pieces, but we are not going there to defend, we are going there to attack. There is no point talking about what if’s, if we are going to go out of the competition it won’t be for the want of trying. It is a good tie for us; a distraction from the league and one we are looking forward too,” Darren Ferguson said.

“There will be changes but it is a strong team that will take on Peterborough. Ben Gibson won’t be fit, he is training, but he has had two sessions in the last three weeks of training,” manager Sean Dyche said in Friday’s press conference.

The game is not all-ticket. Posh fans will be able to buy tickets at Turf Moor. Tickets went off sale at 3pm on Friday with just over 1,650 sold.

Posh will be in the black and pink away kit.

The match referee is Robert Jones.

VAR will be used for the fisrt time in a Posh game.

If the tie is level after 90 minutes, a replay will be required at the Weston Homes Stadium.

The ground is situated in a mainly residential area and only car owners with resident's permits will be allowed to park on-street in the designated areas and any cars parked illegally will be subject to local enforcement. As ever please emphasise local parking restrictions must be adhered to on these residential streets and hence, we advise to use the designated car parks preferentially.

If supporters are travelling by National Rail services we would recommend them to use the national rail enquires website / app just in case of any problems www.nationalrail.co.uk.