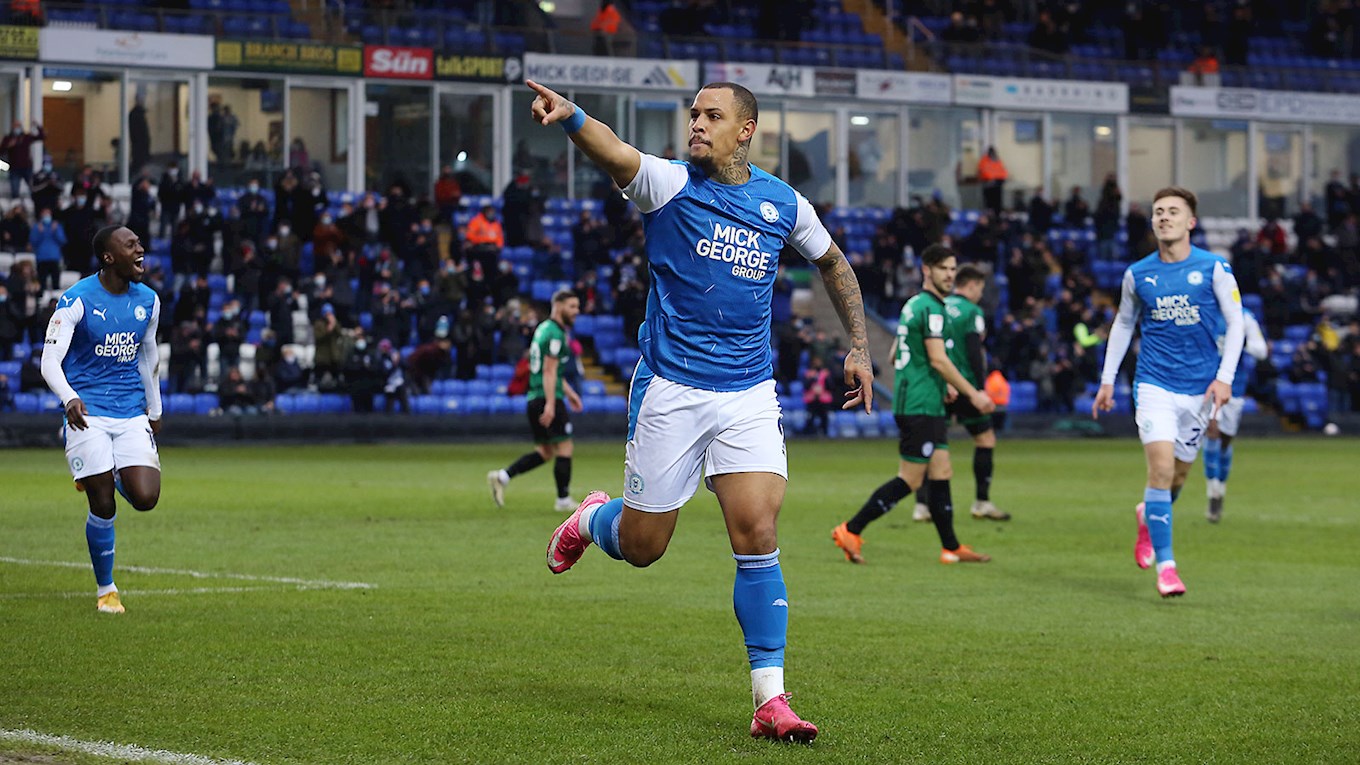 Match report for Peterborough United vs Rochdale on 12 Dec 20

Striker Jonson Clarke-Harris took his season tally to 11 after a hat-trick in a 4-1 victory over Rochdale.

Rochdale will be sick of the sight of the Weston Homes Stadium. Last term they were beaten 6-0 with Ivan Toney netting a hat-trick and this season, they leave empty handed again as a Jonson Clarke-Harris treble helped Darren Ferguson’s men record a 4-1 victory.

Reece Brown cracked a superb left-footed effort onto the post as Posh made a lively start to proceedings at the Weston Homes Stadium. Posh broke the deadlock from the spot on four minutes after Idris Kanu was upended in the box, Jonson CLARKE-HARRIS coolly sending keeper Jay Lynch the wrong way from the spot.

The visitors levelled two minutes later, a dink into the box was met by HUMPHRYS who squeezed a shot past Pym at the back post. However, Posh restored their advantage on 10 minutes as a teasing cross from Harrison Burrows was headed past Lynch by CLARKE-HARRIS for his second of the contest.

Brown dragged a left-foot shot wide of the target after good work from Dembele as Posh pressed for a third goal in an incredibly open start to the League One fixture. Posh made it 3-1 on 22 minutes and it was a hat-trick for CLARKE-HARRIS as he fired home from close-range after Beevers saw a shot blocked.

Skipper Beevers was cautioned for a foul on the near touchline by referee Brett Huxtable on 35 minutes. On 40 minutes, Posh made it 4-1 as a Flynn Clarke corner kick was headed home at the near post by Nathan THOMPSON.

In first half stoppage time, Thompson picked up a fifth caution of the campaign with a foul on Morley. Kanu fired wide of the near post after good work from Dembele in a tight spot as Posh tried to get a fifth early in the second half.

Clarke had a chance to get his name on the score-sheet on 49 minutes after good work from Brown and Kanu to create an opportunity for the 17-year-old, but he lifted his shot over the crossbar. Lund fired well over the top at the other end on 52 minutes after the midfielder was afforded a little space to get the ball out of his feet and let fly.

Darren Ferguson made a change on the hour mark with Mo Eisa replacing Dembele and moments later Sammie Szmodics replaced Clarke. Eisa was denied a third goal in the week by a smart stop from Lynch on 67 minutes. He keeper was called upon again moments later to keep out a fierce close-range strike from Clarke-Harris after Burrows’ initial effort was blocked.

Clarke-Harris missed another good opportunity seconds later, a low cross from Burrows side-footed wide by the front man. Szmodics swept a shot over with his left-foot after a good pull-back from Burrows on 73 minutes as again a chance went begging for a fifth goal.