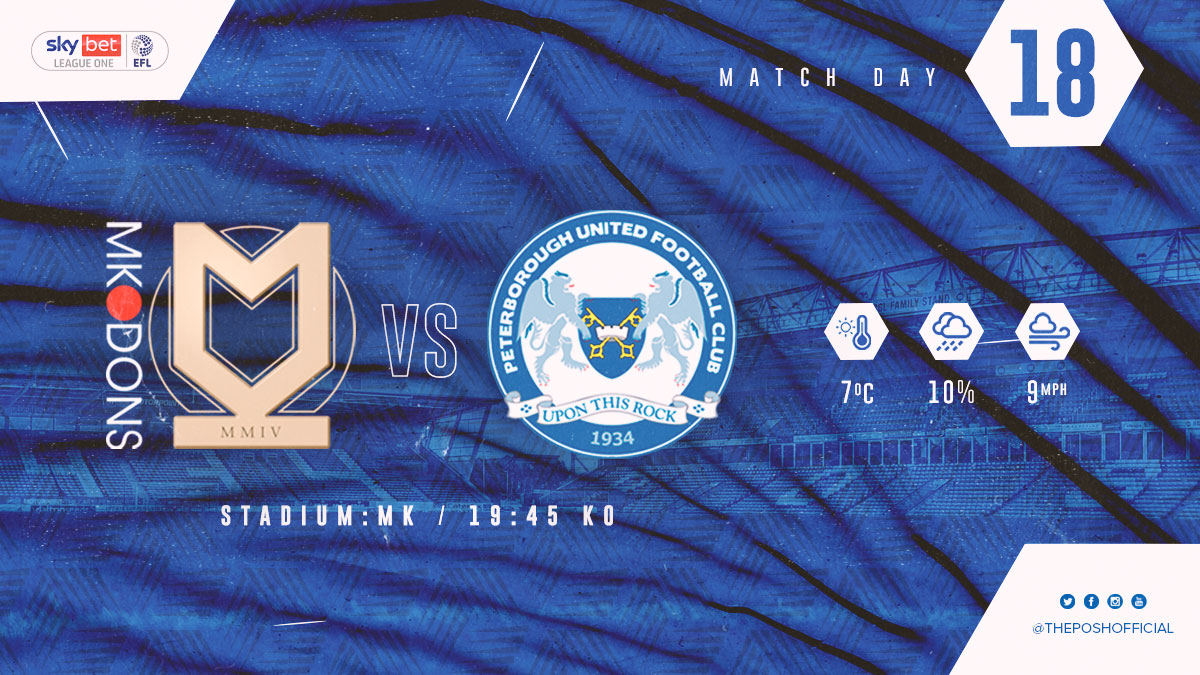 Peterborough United make the relatively short trip to Stadium: MK to face Russell Martin’s Milton Keynes Dons on Tuesday night in Sky Bet League One action, with up to 2,000 home fans permitted for the Sky Bet League One meeting (7.45pm).

Posh go into the clash on the back of two successive victories, including the 4-1 success over Rochdale at the Weston Homes Stadium thanks to a hat-trick from Jonson Clarke-Harris and a header from Nathan Thompson. Clarke-Harris now has 11 for the campaign and is the leading scorer in the league.

MK Dons were held to a 1-1 draw by improving Burton Albion, securing a point with a penalty in the second half from Scott Fraser after former Posh defender Colin Daniel had given the Brewers the lead inside 10 minutes.

Posh are without defender Nathan Thompson, who picked up his fifth caution of the season at the weekend. Ronnie Edwards, Niall Mason and Frazer Blake-Tracy are expected to be vying for his position if Darren Ferguson plays the same formation.

Dan Butler will be back in the squad after missing a few weeks with a calf strain, but Ricky-Jade Jones is set to miss out as he gets a full week of training under his belt ahead of an anticipated return on Saturday against Ipswich Town. Joe Ward is still scheduled to be back at the end of the month.

Experienced front man Cameron Jerome is set to lead the line for the Dons. He has been a revelation since signing for the club earlier in the campaign. Former Posh front man Kieran Agard was an unused substitute at the weekend but Jerome and Cartlon Morris have formed an effective partnership in attack.

“It is another big pitch and MK Dons are an expansive side, they have some good, experienced players across the pitch, and they have good options in key areas, but for us it is building on the weekend and trying to put a run together. Russell Martin is somebody I had as a player and I thought then he had all the tools to become a manager and so it has proved, I have spoken to him numerous times since he took the job. Mk Dons are a side that have a clear identity on how they play, they are a good side and a tricky opponent,” Darren Ferguson said.

“I really enjoyed working with Darren at Peterborough. He made me captain at a very young age. I really improved in my time. I have a lot of respect for him and it is a club I really enjoyed playing for. Peterborough get the big picture. They have a long-term strategy. They are a strong side in this division, it will be a tough game for us. However, we have put in good performances against the top sides this season,” MK Dons boss Russell Martin said.

Match passes are available for Tuesday night’s game for £10. You can purchase a match pass here:

Posh will be in pink shirts, black shorts and pink socks for the game.