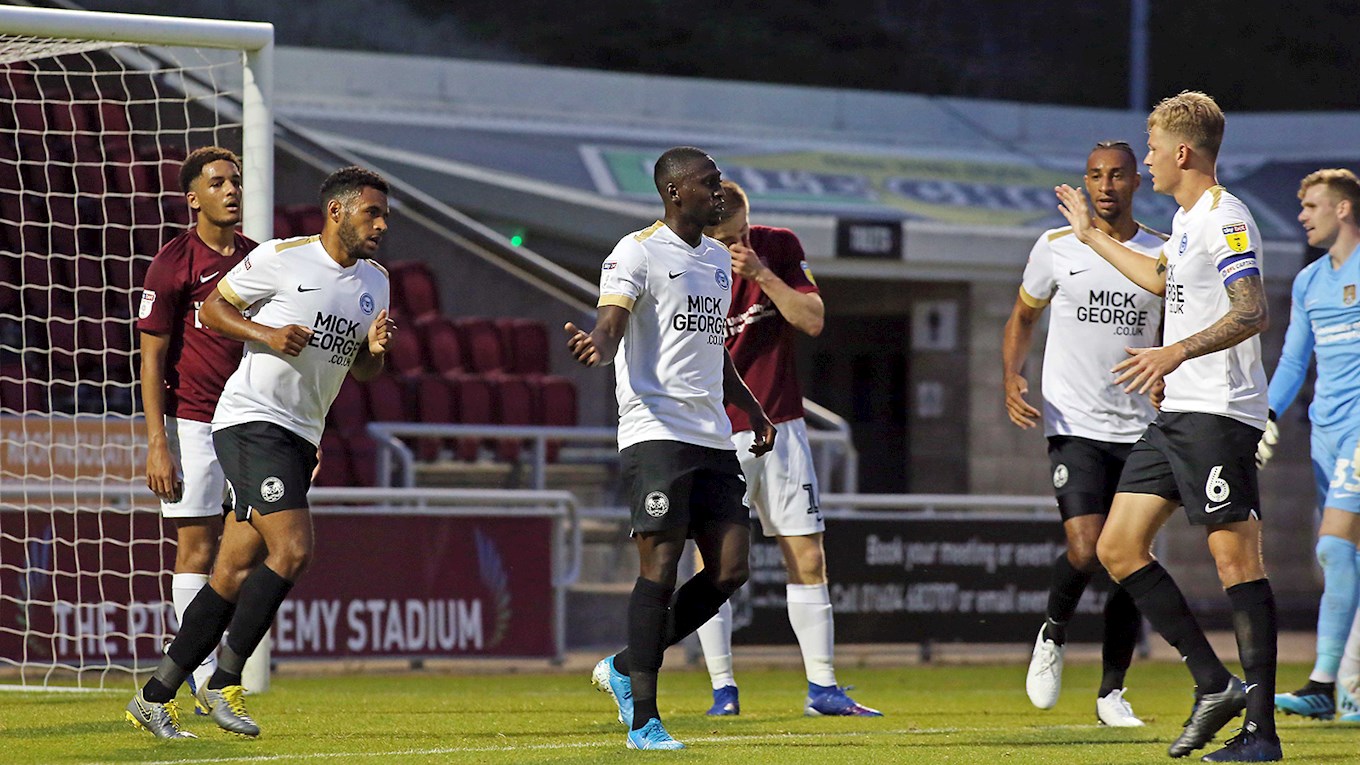 Posh recorded a derby day victory over Northampton Town thanks to two first half strikes by Idris Kanu and Siriki Dembele.

Peterborough United ran out 2-0 winners over Northampton Town in the first group stage game of the Leasing.com Trophy at the PTS Academy Stadium with Idris Kanu scoring his first goal in a Posh shirt and Siriki Dembele firing home an outstanding individual effort.

Matt Warburton tested goalkeeper Christy Pym with a snap shot with his left-foot on six minutes after cutting inside from the left. Posh were inches away from breaking the deadlock on 12 minutes as Louis Reed’s free-kick from the edge of the box cracked against the crossbar before bouncing to safety.

Warburton headed over at the near post after a patient Cobblers move on the quarter hour mark before Pym made an excellent stop from point blank range to deny Smith after a good cross from Adams down the right.

Posh opened the scoring on 20 minutes, a corner from Joe Ward was met by Idris KANU, who hooked the ball goalwards and via a couple of deflections, it nestled in the back of the net. Posh doubled the lead a few minutes later and what a goal it was, Siriki DEMBELE collecting the ball deep in the opposition half, he twisted and turned past two defenders and then fired into the roof of the net with his weaker left-foot.

Posh nearly made it 3-0 on 26 minutes, excellent work in the approach play from Kanu who ghosted past two defenders before laying the ball into the path of Dembele, but this time, off balance, he fired wide. Wharton was cautioned for a tackle from behind on Kanu on 29 minutes by referee Josh Smith.

Kanu fired wide with his left-foot on 29 minutes after a good clipped cross from Butler as Posh continued to dominate. Pym produced another good stop on 33 minutes to keep out a downward Lines header after another good delivery from Adams.

Kanu showed a clean pair of heels as the first half drew to a close, but he dragged his shot wide of the far post from a tight angle. Burrows saw a low shot comfortably gathered by Fisher as the half entered two minutes of stoppage time.

Burrows was denied at the near post by Fisher after a right-footed effort from a tight angle before Thompson tried an audacious chip which cleared the crossbar. Ward was next to try his luck, racing onto a Butler pass, but his low left-foot shot was kept out by the legs of keeper Fisher who was a busy man in the early exchanges of the second half.

Burrows tested Fisher again on 55 minutes with a low left-foot shot after linking well with right-back Nathan Thompson in a wide area. Fisher was as obvious a Cobblers man of the match you were ever going to see, he was alert again to keep out Kanu after another link with Dembele on 56 minutes.

Pym was called upon to keep out Waters on the hour mark after waltzing into the box following a poor piece of control from Ward. Thompson was cautioned for a foul in the centre circle moments later as he attempted to bring an end to a swift counter-attack from the Cobblers.

Fisher produced more heroics to keep out Dembele after more superb approach play by the former Grimsby man as he showed excellent control and then balance to twist into a shooting position. Pym kept out a swerving effort from substitute Oliver on 86 minutes after he let fly from distance.