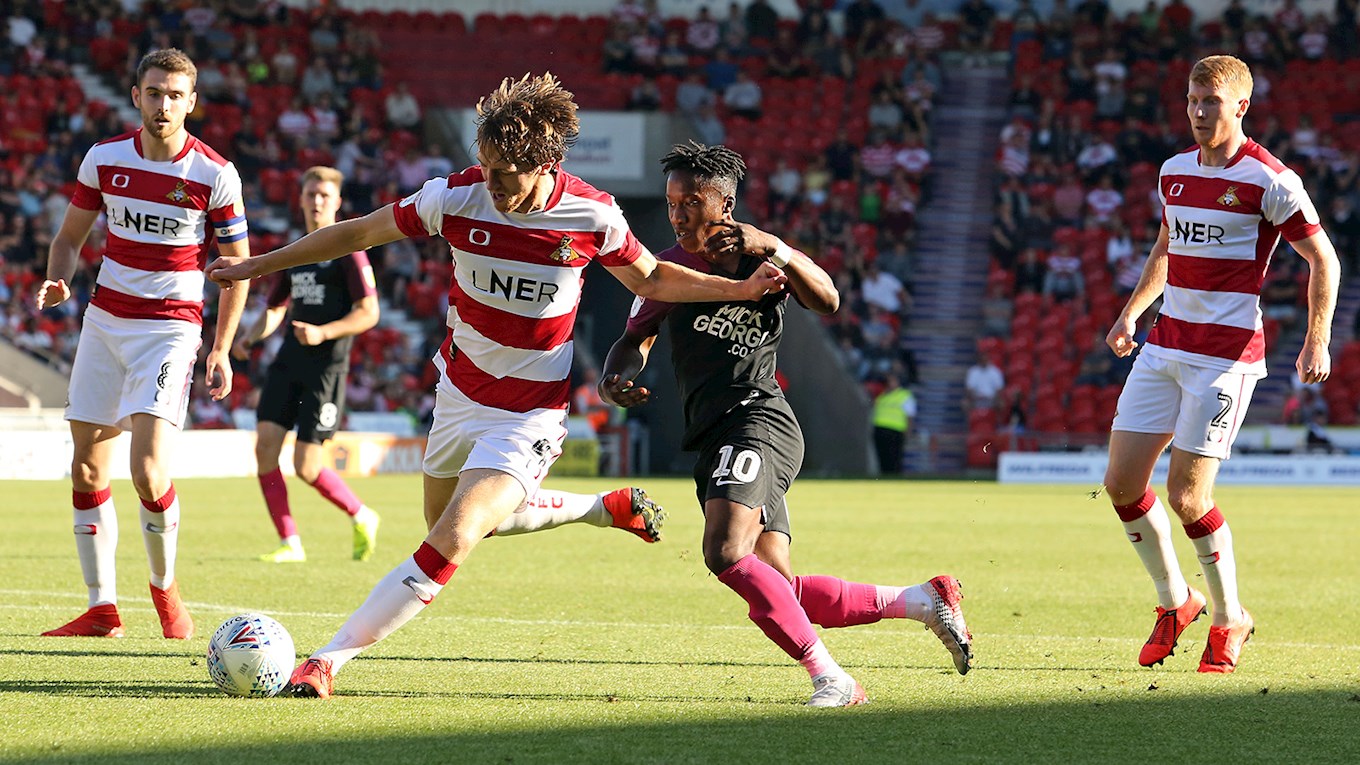 Peterborough United suffered a first defeat in seven in all competitions as Doncaster Rovers condemned Darren Ferguson’s men to a 2-0 defeat at the Keapmoat Stadium with first half goals from James Coppinger and Kieran Sadlier doing the damage.

Experienced midfielder James Coppinger wasted a golden chance to give the hosts the lead inside the opening three minutes after a forceful run down the left from Jon Taylor, but his stabbed effort goalwards was routine for keeper Christy Pym.

Taylor was a whisker away from the breakthrough on 11 minutes following a stunning strike from distance after cutting inside onto his right-foot. On the quarter mark, Posh struck the woodwork twice in 10 seconds as a driven pass from Maddison picked out the onrushing Toney, his looping header cracked against the bar and the rebound on the stretch was diverted onto the same bar from the fingertips of keeper Seny Dieng.

Toney was close again moments later after Maddison won the ball in the centre circle, the striker opening his body up to attempt to curl into the bottom corner, it rolled inches wide of the target. The deadlock was broken on the half hour mark as a right-wing centre was glanced home at the near post by the experienced COPPINGER.

Pym made a good save down to his left to keep out a toe-poked effort from Taylor as Doncaster continued to press with Posh looking a little jaded. The home side took advantage of that tiredness by adding a second on 39 minutes as SADLIER raced away and rolled the ball past Pym and into the bottom corner.

Ennis was cautioned for a foul on Kent on 40 minutes, a challenge that left the Posh man needing extensive treatment. Three minutes of added time was indicated by the fourth official but Posh couldn’t get a goal back before the break.

Posh made a double change at the break with Nathan Thompson and Siriki Dembele introduced for Joe Ward and Dan Butler. Coppinger saw a shot on the turn go wide of the far post on 49 minutes before Sheaf had a similar effort which went wide.

Knight fired wide with his right-foot on 56 minutes after a patient Posh build-up in and around the box while at the other end, Halliday flashed a shot inches past the post with Pym at full stretch. Taylor was then inches away from a third as Doncaster caught Posh on the counter attack with open spaces inevitable as Posh pushed forward.

Maddison was denied by Dieng from a set-piece on 76 minutes after Toney was felled by Anderson. Maddison curled over from distance after good work from substitute Kanu as the game entered the final stages. Posh had the ball in the net on 87 minutes as Toney headed home a Maddison cross but the top scorer headed home from an offside position.