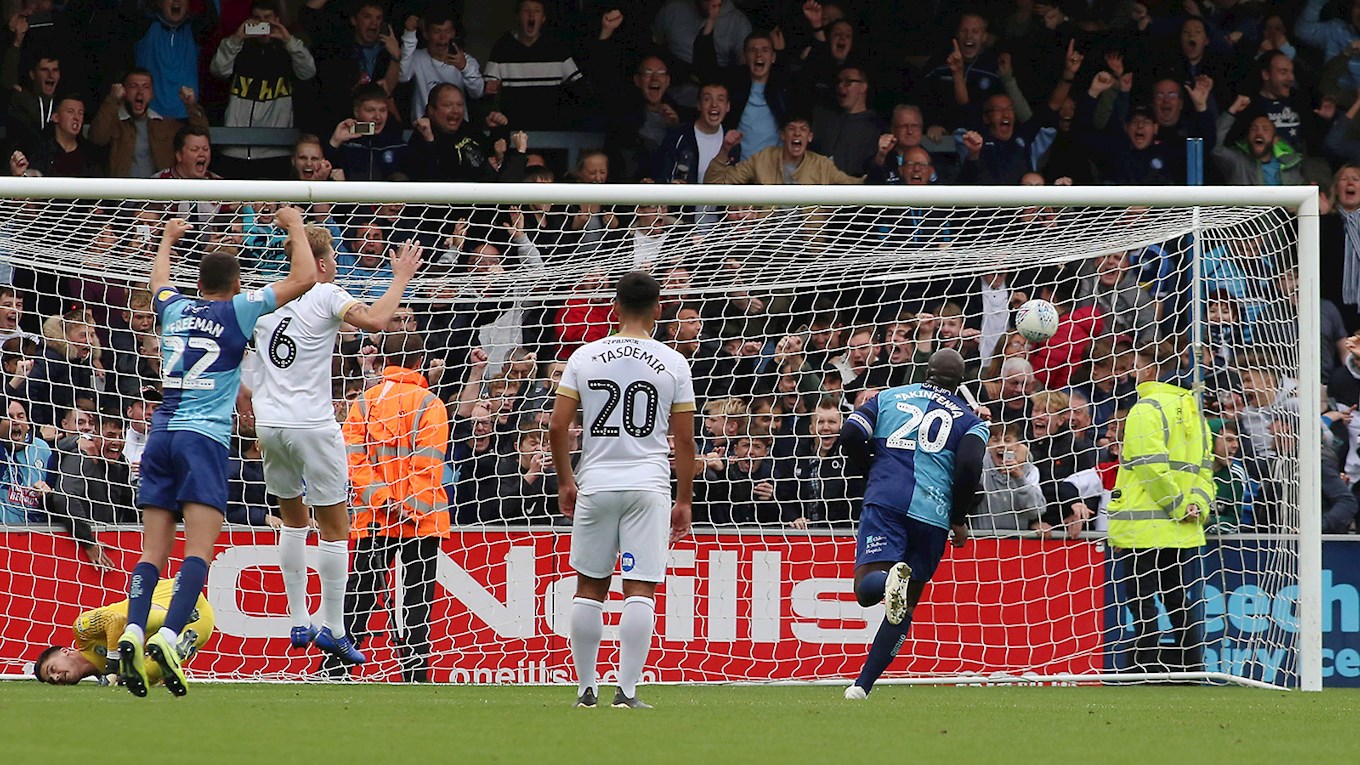 Wycombe Wanderers scored in stoppage time to earn a 3-3 draw with Posh at Adams Park.

Peterborough United squandered a 2-0 and a 3-2 lead to draw 3-3 with Wycombe Wanderers at Adams Park with Adebayo Akinfenwa celebrating his 150th appearance with a brace, the second coming from the spot in stoppage time following a soft foul by Dan Butler on Scott Kashket.

Curtis Thompson was cautioned inside the opening two minutes for a foul on Marcus Maddison by the touchline. Mo EISA found the breakthrough on nine minutes, collecting a pass from Frazer Blake-Tracy before curling home with his right-foot past the despairing dive of goalkeeper Ryan Allsop for his ninth goal of the campaign.

Christy Pym made his first save of the afternoon on 16 minutes, comfortably keeping out an effort from Gape who let fly from long-range. Maddison was cautioned on 25 minutes for kicking the ball away by referee Mr Finnie.

Onyedinma fired wide from distance after manoeuvring himself into a shooting position 25-yards from goal. Reed and Mason both fired wide from 30-yards at the other end as Wycombe struggled to clear a couple of Maddison set-pieces.

Posh doubled the lead on 38 minutes, a Maddison free-kick was not properly dealt with and the ball fell nicely for Josh KNIGHT who took a touch and rifled the ball into the back of the net with the man on the line just unable to keep it out.

Maddison fired over with a free-kick from 25-yards after he himself had been felled before Wycombe made a change with Rolando Aarons replacing Onyedinma. Maddison could and perhaps should have extended the advantage on 51 minutes after racing onto a clever Toney flick, the long-serving midfielder firing wide with his left-foot inside the box.

The home side reduced the arrears on 54 minutes as a free-kick from Gape was headed past Pym by Adebayo AKINFENWA on his 150th appearance for the club. Posh made a change on the hour mark with Serhat Tasdemir replacing Maddison.

The home side drew themselves level on 62 minutes and it was an own goal from Frankie Kent as he diverted a right-wing centre past his own goalkeeper from close-range. Charles headed wide from a corner kick as Wycombe continued to dominate.

Posh got themselves back in front on 70 minutes as a driven corner from substitute Serhat Tasdemir was headed up into the air by TONEY and then superbly, acrobatically volleyed home by the former Newcastle front man.

Freeman volleyed over at the back post on 72 minutes before Wycombe introduced Scott Kashket for Wheeler in attack. Curtis Thompson was shown a second yellow card and a subsequent red card for a foul on Toney on 83 minutes by referee Mr Finnie.

Akinfenwa headed over from a Gape cross on 86 minutes after the Wycombe’s man’s initial free-kick struck the wall. Pym did well to hold an effort from Aarons on 88 minutes as Posh again caused their own problems. In six minutes of added time, Wycombe drew themselves level with 10-men, substitute Butler penalised for bringing down Kasket and AKINFENWA coolly slotted home the spot-kick.

Deep in stoppage time, Alsopp made a superb stop as a mad scramble ensued as Posh tried to find a winner with Eisa the man denied. Toney saw his header from the resulting set-piece gathered by the keeper before the referee brought an end to the contest.