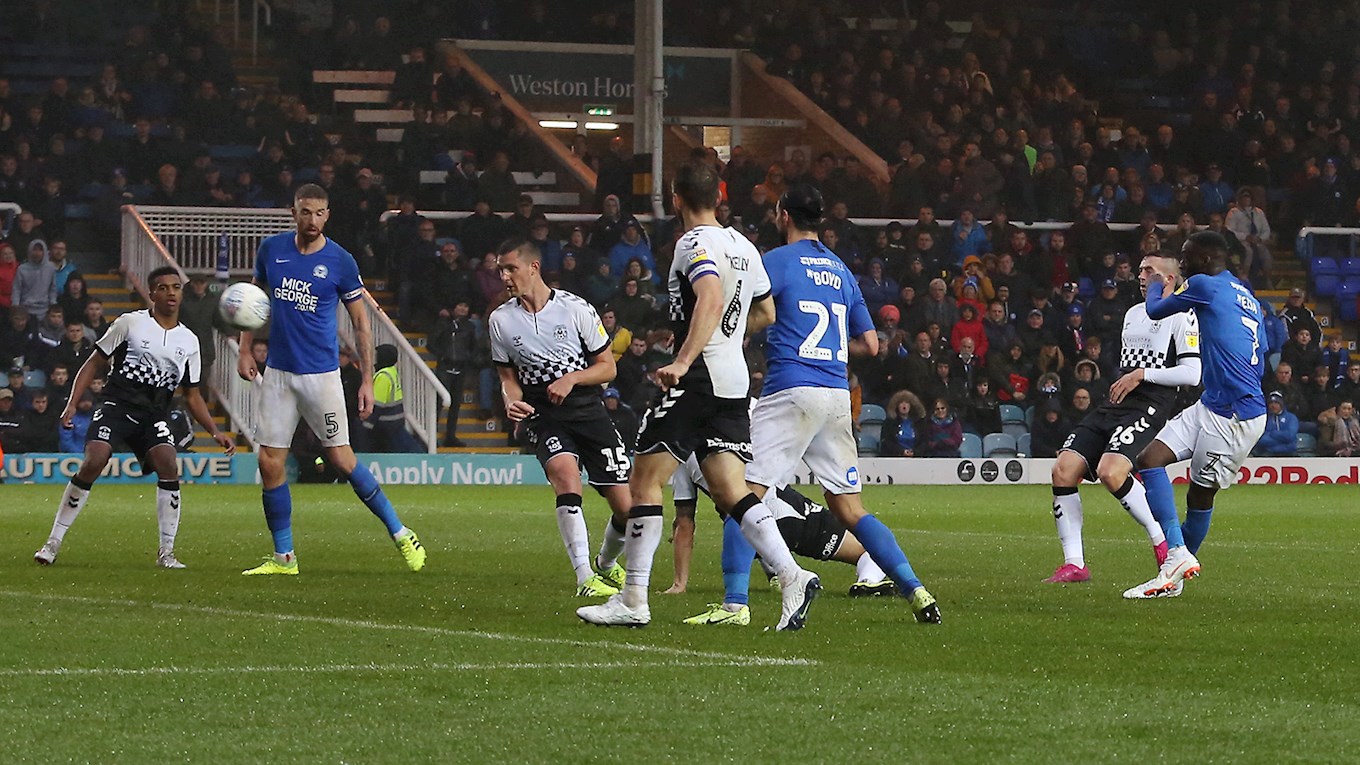 Striker Mo Eisa netted his 11th goal of the campaign to earn Peterborough United a 2-2 draw against Coventry City.

“You wouldn’t want that ball to drop to anyone else on that pitch than Mo Eisa”, was the opening statement from boss Darren Ferguson and he was right, one of the best finishers that Fergie has worked with stroked home a 95th minute equaliser to earn Posh a 2-2 draw from a pulsating encounter with Coventry City.

Goalkeeper Christy Pym was called into action inside the opening two minutes as he kept out Callum O’Hara who had burst into the box following a won tackle against Mark Beevers. Ivan Toney was close at the other end as he raced onto a clever Maddison pass, but on the stretch, he couldn’t keep his effort on target.

Zain Westbrooke curled a free-kick straight into the face of Ivan Toney on five minutes after Kent had been penalised for a foul on the edge of the box. Maddison was kept out by a fine sprawling save from Marosi on seven minutes before Mark Beevers header from a corner was diverted over his own bar by Biamou.

On 11 minutes, the visitors got their noses in front against the run of play as the ball ran kindly for striker BAKAYOKO who took a touch before curling the ball past Pym and into the back of the net. Sam McCallum was cautioned for a shirt tug on Maddison on 13 minutes as he tried to advance down the right.

Niall Mason was cautioned on 20 minutes for a foul as the Posh frustration began to grow in the driving rain at the Weston Homes Stadium. Maddison fired wide of the near post after advancing down the right from a good cross-field pass by Blake-Tracy who moments later was cautioned for a foul on this near side.

Posh made a change on 23 minutes with Siriki Dembele replacing Blake-Tracy with Darren Ferguson implementing a rather bold change of system. Toney hooked a volley over the top from a Maddison delivery moments later before Maddison saw a free-kick strike the wall.

Biamou fired wide after somehow getting in behind from a huge punt downfield as Posh were all at sea at the back. Coventry had the ball in the net again on 40 minutes as Bakayoko dived in but the referee ruled it out for a foul on Beevers.

Dabo was booked for a foul on Mason on 42 minutes by referee Mr Young with Marosi tested moments later, keeping out a half volley from Boyd. Posh levelled the scores on 51 minutes as Marcus MADDISON kept his cool from the spot to send Marosi the wrong way after Toney was upended in the box by McFadzean, who was booked.

Toney saw a downward header blocked from a Maddison corner kick on 55 minutes before Josh Knight was cautioned for a foul. Pym did well to keep out an acrobatic Biamou effort on 62 minutes following a well-worked Sky Blues free-kick.

Goalkeeper Marosi made a smart stop to keep out a skidding effort from Toney on 65 minutes after good link-up play from Eisa. Biamou squandered a fine chance to put the visitors back in front moments later but he fired wide of Pym’s goal from 12-yards. On 85 minutes, the visitors got themselves in front following an acrobatic volley from BIAMOU.

Ward sent a side-footed volley over the crossbar from only a half-cleared Coventry clearance as Posh pushed for a second leveller. Ward saw a shot blocked before Toney’s glancing header was superbly tipped over by goalkeeper Marosi.

Deep into stoppage time, in fact the last play of the game, Posh got themselves a point and what a composed finish from Mo EISA for his 11th goal of the campaign, takes a touch and curls it into the corner.