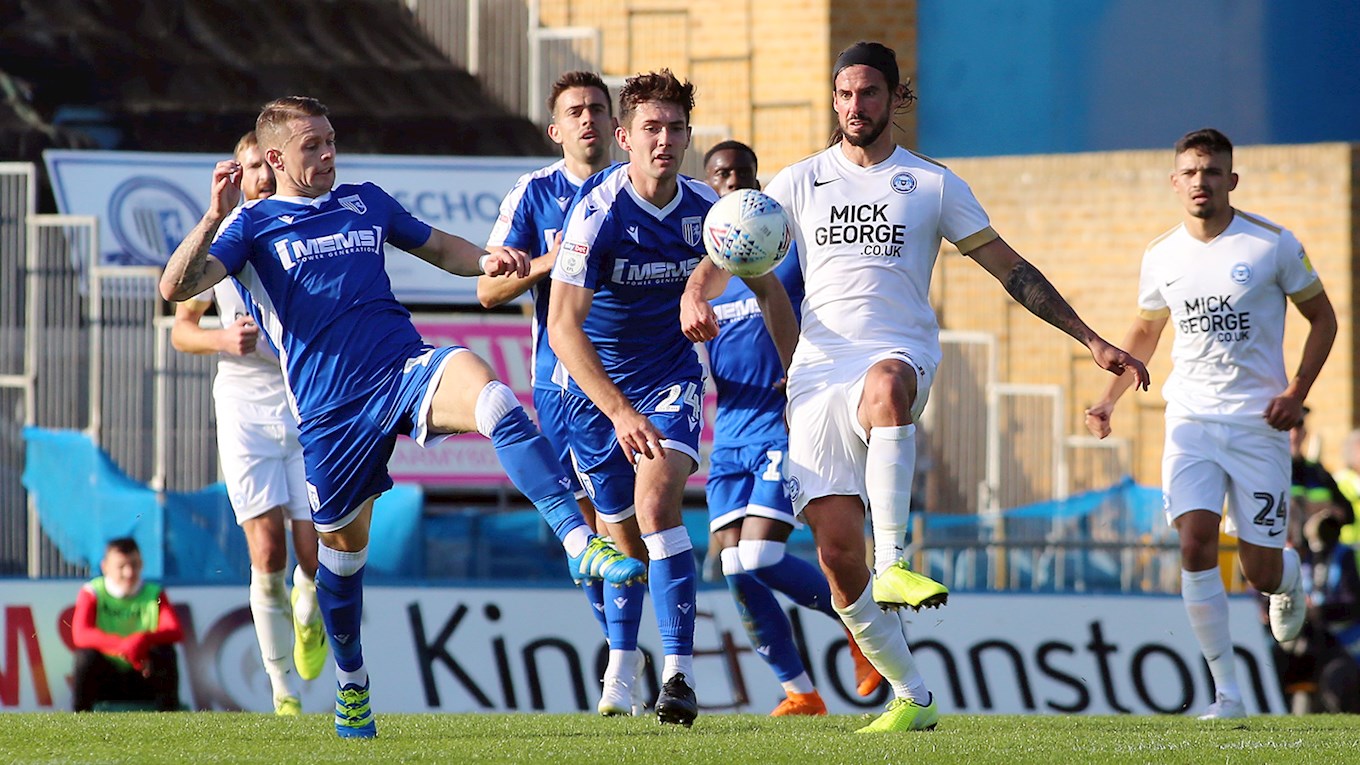 Match report for Gillingham vs Peterborough United on 19 Oct 19

A stunner from Joe Ward and a penalty from Mo Eisa secured a battling 2-1 win at Gillingham.

Peterborough United put in a battling display in difficult conditions at Priestfield and thanks to a stunning strike from Joe Ward and a penalty kick from Mo Eisa, his 10th of the campaign, Darren Ferguson was able to celebrate his 400th game in charge of the club with three important points.

It was a lively start at Priestfield with both sides having chances in the opening exchanges, first Mo Eisa saw a shot blocked after good work from Ivan Toney and Siriki Dembele, before goalkeeper Christy Pym made a fine save to deny Mikael Ndjoli as Posh struggled to clear.

Brandon Hanlon headed wide from a corner kick on 27 minutes after a sustained spell of pressure from the home side, forcing numerous set-pieces by hooking balls into the channel. On 39 minutes, Posh got themselves in front and it was a stunning strike, rather out of keeping with the first half, Joe WARD taking a touch inside and then rifling a superb effort from 25-yards into the top corner giving goalkeeper Bonham no chance.

O’Keefe side-footed a volley over the top moments later after he was picked out by Byrne in space on the edge of the box. Oglivie was cautioned for a foul on Dembele on 47 minutes with Toney firing the free-kick from long-range wide of the target.

Posh doubled their lead on 51 minutes as a driven corner from Joe Ward was handled by Byrne allowing EISA to step up and coolly send the keeper the wrong way from the spot to secure his 10th goal of the campaign.

O’Connor saw a left-foot free-kick deflect over the bar on 66 minutes as the home side, buoyed by their fans behind the goal in fine voice, put a constant stream of pressure on the Posh goal. Toney had two half chances on 77 minutes, the first was deflected wide, the second header went wide of the target from the resulting corner from Ward which keeper Bonham missed.

On 79 minutes, the hosts reduced the arrears as Mason’s attempted back pass was deflected into the path of MANDRON who made no mistake curling past Pym and into the back of the net. The hosts pressed for an equaliser and clipped the bar through Marshall late on, but despite five minutes of injury time, Posh held on for three points.