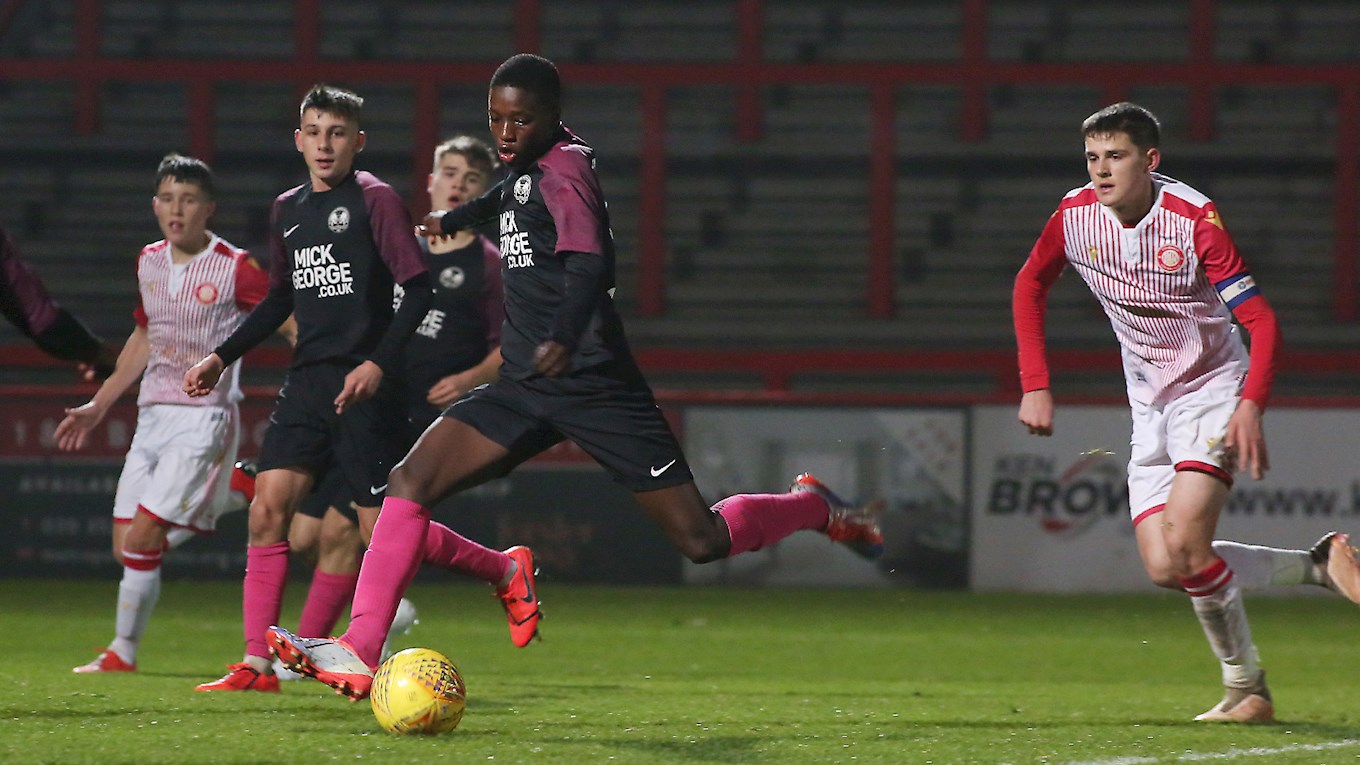 Youngsters Knocked Out Of Youth Cup

Posh under 18s suffer extra-time defeat to Stevenage to bow out of competition.

A Peterborough United under 18 side, missing the injured Flynn Clarke and the unavailable Ricky-Jade Jones and Harrison Burrows, suffered an extra-time defeat to Stevenage at the Lamex Stadium to bow out of the FA Youth Cup at the second round stage.

After a quiet opening, it was Posh who registered the first effort towards goal with midfielder Luke Harris tricking his way past the defender before unleashing a powerful effort from 30-yards that cleared the crossbar.

Charlie O’Connell tested goalkeeper Edgeworth on nine minutes from a dead ball situation after Jones was body-checked. Moriaty headed over from a good right-wing centre on 14 minutes as the home side found a bit of room in the wide area.

Smyth whistled a shot just wide of the target on 20 minutes as the home side took advantage of a poor clearance from the Posh defensive third. Allen did well to hold a free-kick from Smith on 28 minutes after a foul from Ruzvidzo.

On the stroke of half-time, the home side took the lead as a mistake from Rudette-Gregory in possession saw the hosts grab possession and despite an excellent stop with his legs from Allen, the rebound fell kindly for Krasniqi to bury the rebound.

Posh made a change at the break with Toby Salmon replacing Roudette-Gregory at the back. Arai fired wide from the edge of the box for the hosts on 50 minutes as Posh struggled to clear a long-throw. Smyth was cautioned for a bad tackle on Harris moments later, a challenge that led to extensive treatment for the midfield man.

Moriaty fired over from long-range after a neat piece of skill to create the opportunity on 64 minute as the home side pressed for a second goal. At the other end, Stevenage were indebted to goalkeeper Edgeworth who produced a fine stop to keep out Rolt after he had forced his way into the penalty area.

Jones was cautioned for a foul less than 60 seconds later by the referee. Allen did well to claw a Williams shot around the post as the tie moved into the final 20 minutes. Smith curled a free-kick into the side-netting on 77 minutes after Hickenson was harshly adjudged to have felled his man 25-yards from goal.

Posh had appeals for a spot-kick turned down on 84 minutes as Rolt appeared to be fouled in the box but the referee waved play on much to the frustration of the Posh players. Right at the death, Posh levelled the scores as a loose ball was slammed home by Shaun RUZVIDZO to send the tie into extra-time.

Copping headed over from a driven corner seven minutes into extra-time as Posh tried to get themselves in front for the first time in the tie. Smyth fired wide from 20-yards after a good burst from the middle of the park.

Stevenage got themselves back in front a minute before the interval with Moriaty tucking home from close-range. Copping had a glorious chance to send the tie to penalties late on after racing onto a Ruzvidzo pass, but he fired wide of the near post with just the keeper to beat.

Stevenage wrapped up the tie and sealed a clash with Aston Villa in round three late on as Smyth coolly slotted the ball past Allen following a swift counter attack.