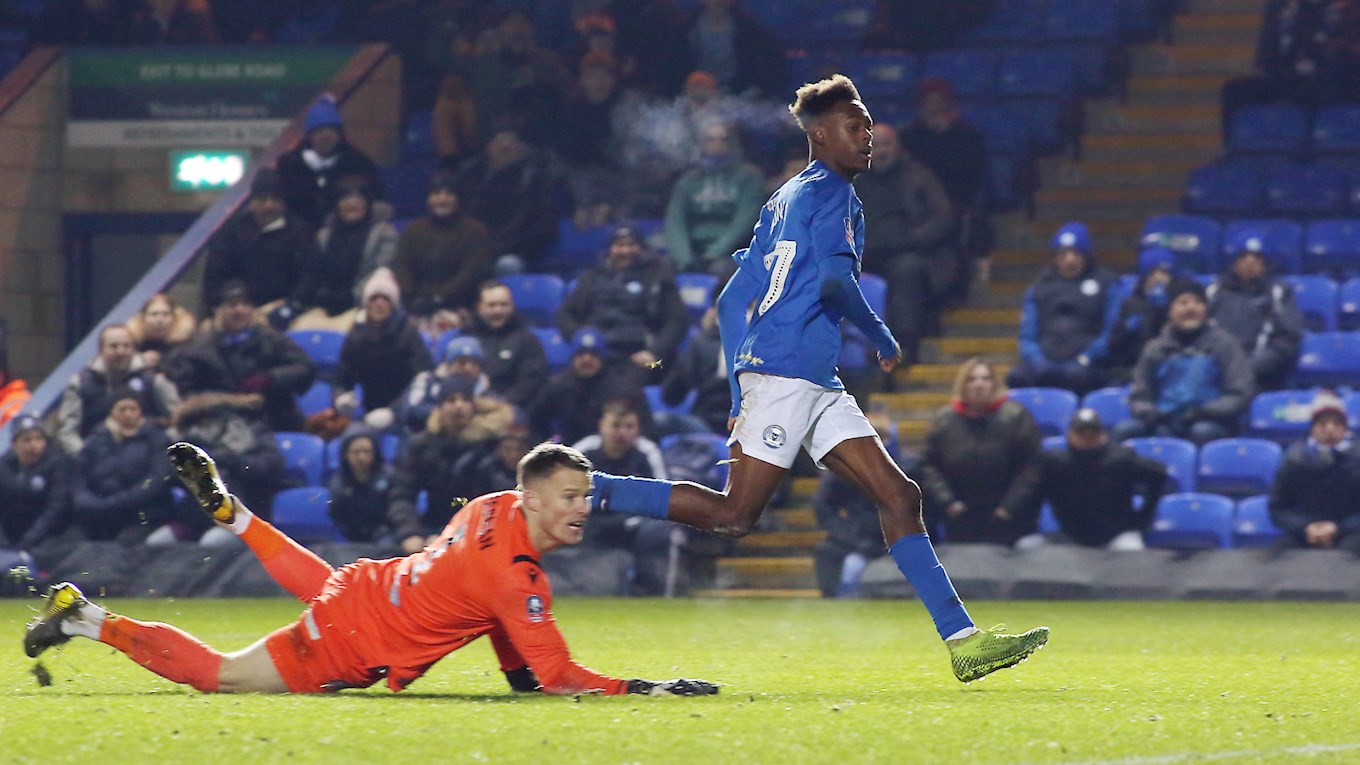 Match report for Peterborough United vs Stevenage on 19 Nov 19

Goals from Mo Eisa and Ricky-Jade Jones earn Posh a second round date with Dover Athletic.

Peterborough United saw off the challenge of Sky Bet League Two side Stevenage at the Weston Homes Stadium to move into the second round of the Emirates FA Cup as goals from Mo Eisa and Ricky-Jade Jones secure a 2-0 win over Mark Sampson’s men.

Mo Eisa fired wide inside the opening five minutes after linking well with his team-mate Ivan Toney and gave the management a bit of a scare by staying down following a heavy challenge, but thankfully he was soon back on his feet and back in the action.

The deadlock was broken on 11 minutes and it was a 13th goal of the campaign for Mo EISA who took a touch and fired a shot past Farman and into the corner from the edge of the box. Maddison was denied by Farman at the near post after a wonderful piece of skill, awareness and ability from Burrows to lift the ball over his opponent and ping a sublime pass out wide to the winger.

On the half hour mark, a good run down the right from Thompson was followed by an intelligent low pass to Burrows but the youngsters’ right-footed effort was skied over the crossbar. Eisa was somehow kept out by Farman on 37 minutes, after good initial work from Maddison and Burrows as Posh pushed for a second goal.

Eisa had a chance to make it 2-0 on 47 minutes after being picked out by Maddison, but his well struck shot was kept out by Farman. Toney swept an effort over the crossbar from the edge of the box on 54 minutes.

Toney and Fernandez were both cautioned for a bit of a flashpoint on the far side on 55 minutes by referee Mr Yates. Joe Ward replaced Burrows just after the hour mark as Darren Ferguson made his first change and moments later goalkeeper Pym was called upon for his first save of the evening, keeping out a low strike from List.

Nugent was a whisker away from an own goal on his return to the Weston Homes Stadium after a low centre from the left midway through the second period. Stevenage made a double change on 68 minutes with Craig Mackail-Smith among the duo introduced.

Ward fired wide from 35-yards on 76 minutes after ignoring a pass to his left to take the shot on. Maddison was a tad closer moments later as his effort whistled just past the upright from 30-yards. Ward was then even closer as his shot rebounded back off the post after good work down the right from Toney.

Pym did well again on 84 minutes to keep out List as Stevenage piled on the pressure in an attempt to send the tie into extra-time. Farman produced another fine stop in stoppage time to keep out youngster Ricky-Jade Jones as he raced clear onto a Maddison pass.

In stoppage time, Posh did wrap the tie up as Maddison squared for Ricky-Jade JONES and he notched his second goal in as many games to put the game to bed. Farman made another good stop to keep out Toney late on but Posh progress onto a tie with Dover Athletic in the second round.