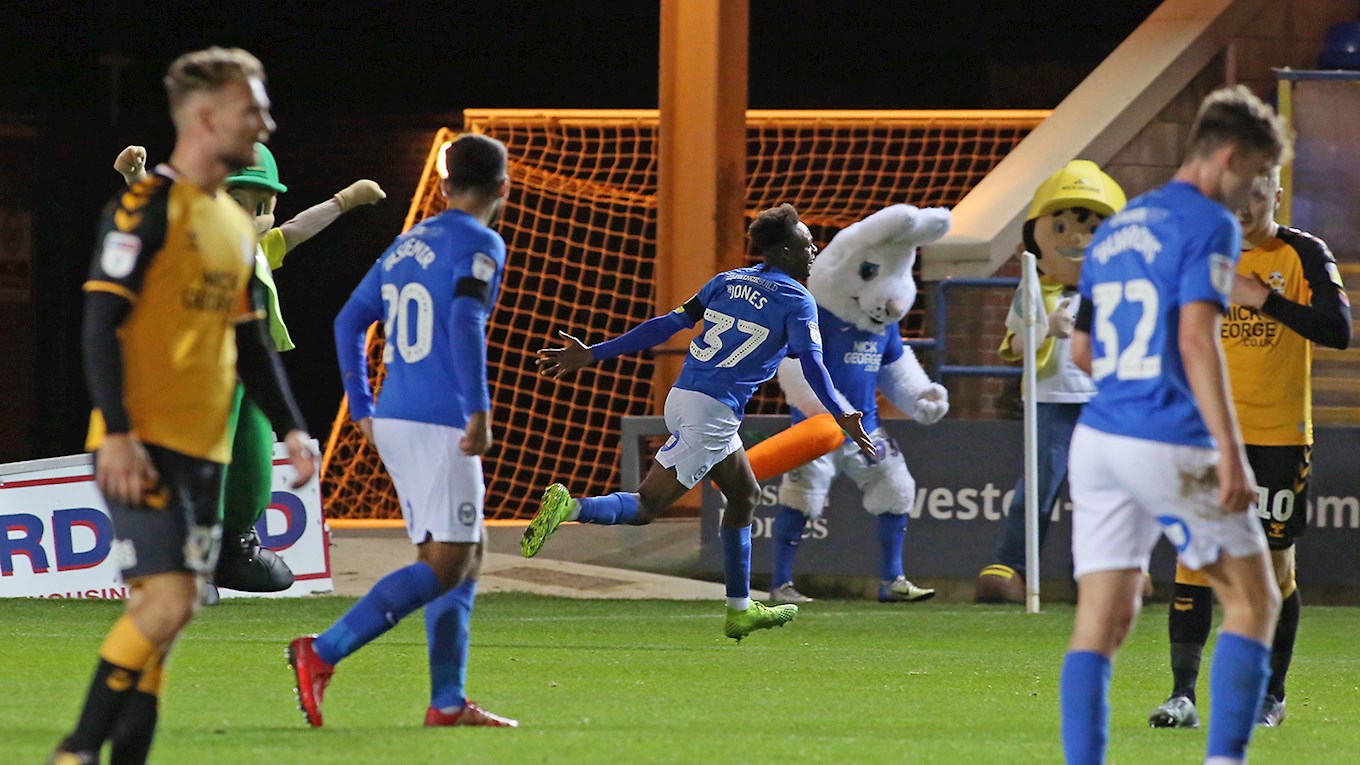 Darren Ferguson pleased with young side after 2-1 victory over U’s.

In what could hardly be considered the fiercest local derby of all time, a youthful Posh made it three wins from three in the Leasing.com Trophy group stage following a 2-1 victory over Cambridge United at the Weston Homes Stadium, in front of a crowd of close to 3,500.

The earliest chance of the game fell to Harvey Knibbs, after Rhys Bennett, Posh’s skipper for the night, gave the ball away. Knibbs didn’t take advantage of this, dragging his shot wide.

Posh’s first chance would fall to Joe Ward on nine minutes, after Dembele was felled on the edge of the area, and they’d take it. WARD firing the free kick into the top left corner. His second of the competition.

Posh would then have a second goal disallowed on the 12th minute mark. Burrows firing on the post, with Rhys Bennett firing in the rebound, but the linesman’s flag was up.

Andrew Dallas, who’s on loan at the U’s from Rangers, would then have a chance to level up the scores, but he put his shot wide of the mark. Idris Kanu had the chance to double the lead on 17 minutes, heading a Joe Ward cross clear over the bar.

Posh would get a second on the half hour mark. Ricky-Jade JONES deftly placing the ball into the bottom left corner, after the ball broke to him following some clever play by Serhat Tasdemir. It is Jones’ first senior goal for the club.

Dallas would have his second chance of the game and the last of the first half on 38 minutes, floating a shot wide after some neat work from himself to retain the ball.

The first chance of the second half came to Knibbs, glancing a header wide on 47 minutes. A minute later, Idris Kanu had a shot saved by Burton, following some industrial work by Jones. The first yellow card arrived in the 76th minute when Jordan Norville-Williams lunged in on Rhys Bennett.

On the 78-minute mark, Harvey KNIBBS slid the ball into a near open net following some miscommunication at the back from the Posh.

He had the chance to draw things level less than a minute later, but Chapman was equal to his effort. This would prove to be Cambridge’s best opportunity to equalise.

Posh would then get their first and only yellow of the affair, substitute Archie Jones booked on 82 minutes for a feisty challenge.

A teasing ball from Norville-Williams was knocked over the bar by Posh sub Copping on 86 minutes. The third booking came after Sam Smith pushed over Idris Kanu, to halt a late Posh counter attack.

A goalmouth scramble in injury time was the Posh’s best chance of the second half. A nice ball from Burrows narrowly avoiding the onrushing Posh attackers. George Marris then stung the palms’ of Chapman from range following a clever dummy. The final chance of the game belonged to Norville-Williams, his free kick not troubling Chapman in the Posh goal.