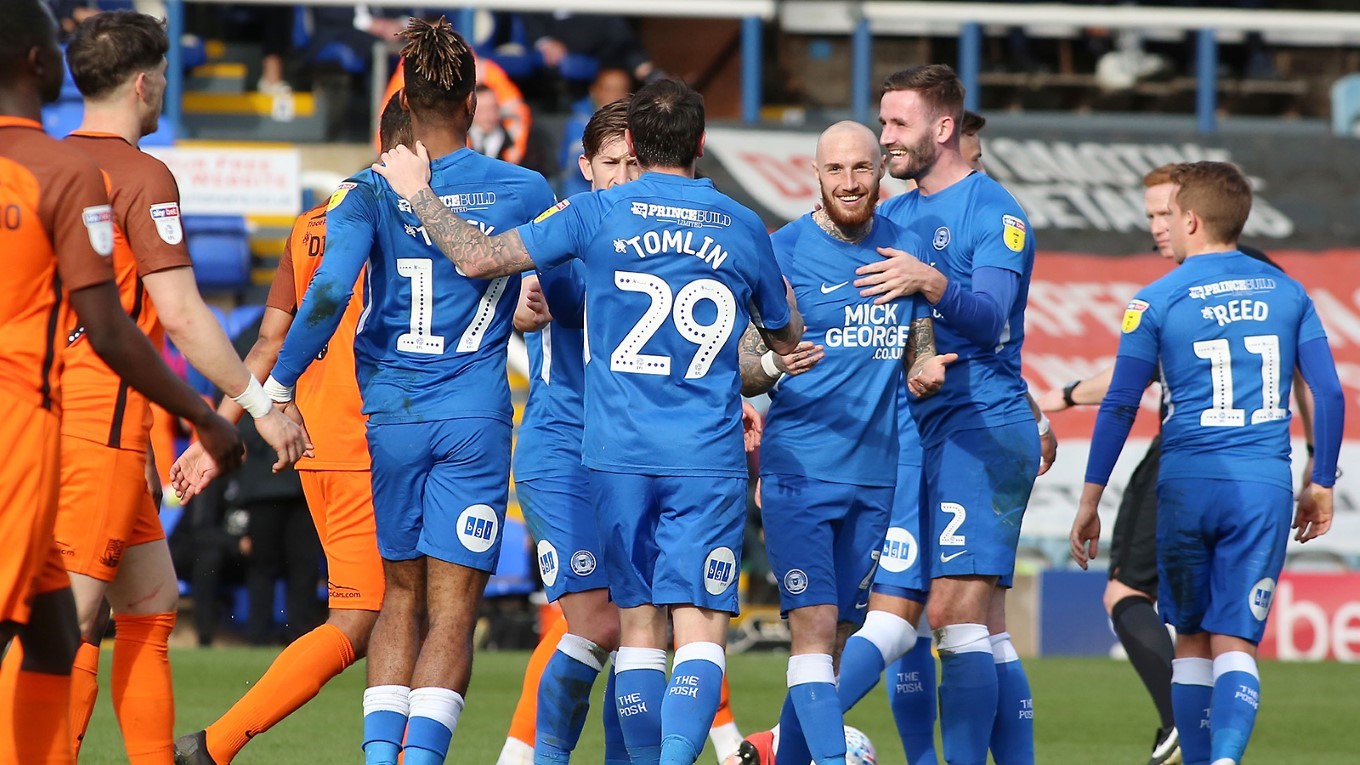 Darren Ferguson celebrated signing a three-year deal at the football club with a 2-0 victory over Southend United at the ABAX Stadium.

Peterborough United recorded a comfortable 2-0 victory over Southend United at the ABAX Stadium to boost the clubs chances of finishing the top six of the Sky Bet League One table with Marcus Maddison and Ben White on target for Darren Ferguson’s men.

Posh created two wonderful chances in the opening few minutes, Ivan Toney was superbly denied by Mark Oxley at the near post and then as the ball was recycled, the two resumed duties again with the keeper producing another fine stop to keep out the Posh leading scorer.

Ward planted a header wide from a teasing Maddison centre on 11 minutes as the tempo continued to be lively in the opening quarter. Simon Cox sent a header from a cross from the left over the bar on 19 minutes as Southend created their first opportunity.

Tomlin produced a fine pass for Toney on 22 minutes, but the striker skied his effort whilst off balance as Posh continued to squander presentable chances. Maddison sent a cross-shot inches past the far post on 28 minutes as Posh continued to try and find the breakthrough.

The deadlock was broken on 40 minutes and what a way to break it, Marcus MADDISON with a stunning free-kick from 30-yards with his left-foot which arrowed past Oxley and into the back of the net. Reed saw a long-range strike whistle just wide of the target before Toney probably should have picked out Ward, electing instead to go himself, but seeing his curler go over the top.

Southend made a change at the break with Harry Bunn replacing Charlie Kelman. Posh had the ball in the back of the net on 47 minutes as Toney side-footed home from close-range but the offside flag was raised and the goal was chalked off.

Bunn fired wide from long-range for the Shrimpers on 55 minutes after a swift counter attack as Chris Powell’s men got some joy down the left. Posh doubled the lead on 57 minutes as a bouncing Maddison free-kick from range was parried by Oxley straight into the path of WHITE who nodded home his first Posh goal.

Tomlin was denied by the keeper on 61 minutes after a quickly-taken free-kick from Posh. Siriki Dembele and Matt Godden replaced Tomlin and Ward on 74 minutes as Darren Ferguson made his first changes of the game.

Toney was cautioned on 80 minutes for a foul by referee Mr Young. Kyle Dempsey replaced Maddison on 84 minutes. Godden sent a late curler wide of the target after good work from fellow substitute Dembele as the game entered the final few moments.