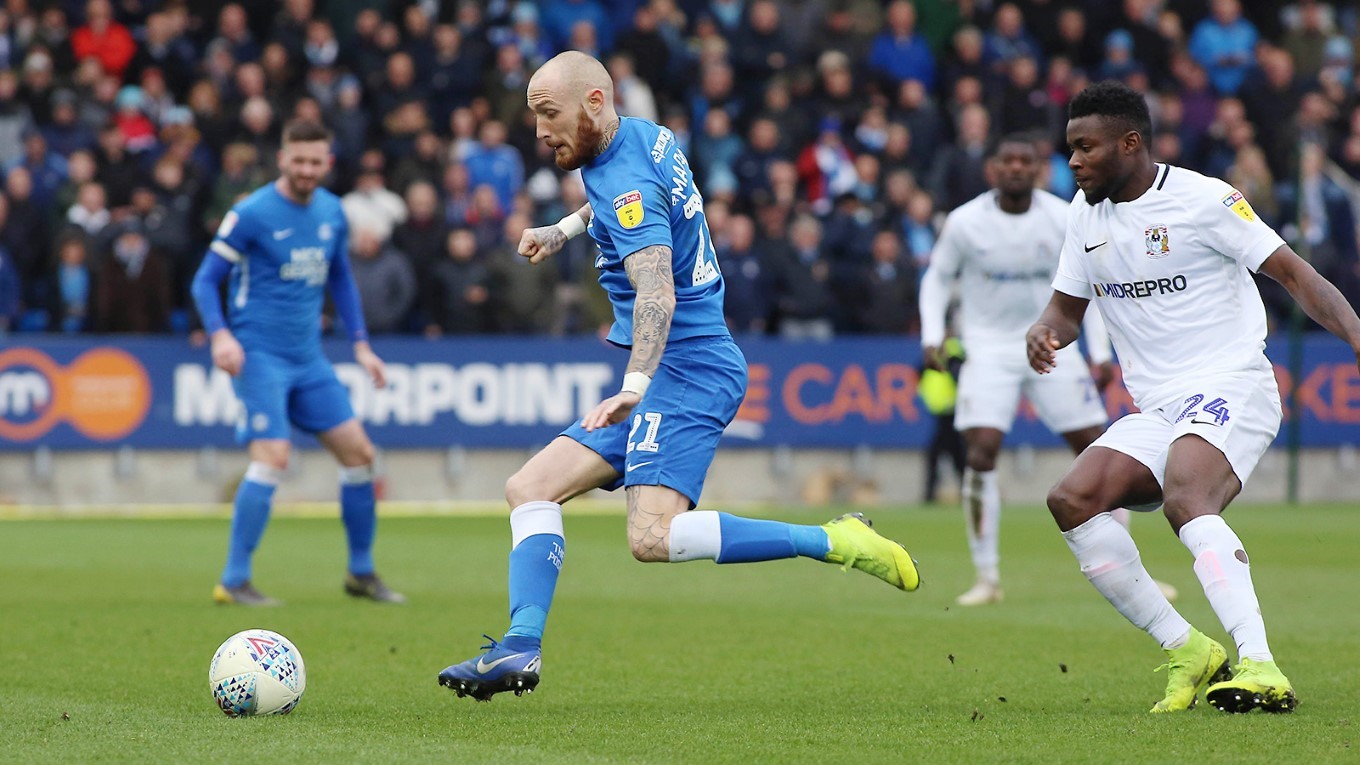 Darren Ferguson’s side suffered a 2-1 defeat to play-off rivals Coventry City at the ABAX Stadium.

Peterborough United suffered a third successive defeat as Coventry City clinched all three points to enhance their chances of reaching the Sky Bet League One play-offs with a 2-1 victory at the ABAX Stadium.

Posh had early appeals for a spot-kick turned down after the ball appeared to strike the arm of defender Dominic Hyam. Lee Burge was then called upon to make a smart stop to tip over a fierce drive from Callum Cooke after a corner kick from Marcus Maddison was only half cleared by the Sky Blues defence.

Amadou Bakayoko glanced a header from an in-swinging corner kick wide of the target on 10 minutes. Maddison fired wide on the half volley after linking well with Toney and Godden moments later as Posh continued to play some good stuff.

O’Malley did well to dash from his line to smother an effort from Hiwula on 14 minutes as Coventry found some space in the channel on the right. Cooke fired wide from 25-yards at the other end after finding some space in a clever pocket behind the visitors’ midfielders.

Mason struck the crossbar with an over-hit wind-assisted cross on 16 minutes before O’Malley came under pressure from the resulting free-kick which was high and swirling in the conditions, eventually Posh hacked the ball clear from danger through Lafferty.

Godden fired wide on the turn after collecting a teasing Maddison cross on his chest on 22 minutes as Lafferty led the charge with a stylish drive out of defence. Godden was superbly denied by Burge on 27 minutes after his close-range volley was plucked to safety.

Maddison saw a swerving effort somehow kept out by Burge again on 32 minutes as Posh pressed for a deserved breakthrough. Coventry got the breakthrough though and it was a poor ball out of defence by White was that punished, the ball eventually falling to BAKAYOKO who slid the ball under the advancing O’Malley.

Posh made a change at the break with Kyle Dempsey replacing Cooke in the central midfield. Coventry doubled the lead moments after the break after a huge clearance from Burge was not dealt with and ENOBAKHARE poked the ball over O’Malley and into the back of the net.

Ward saw a cross-shot tipped over by Burge on 50 minutes before O’Malley was cautioned for a mad dash from his goal-line following a long ball forward. Lee Tomlin replaced Denton on 56 minutes as Darren Ferguson made his second switch.

Toney headed a Lafferty cross wide of the target on the hour mark after a good ball from substitute Tomlin had started the move. Kelly struck the crossbar with a fierce drive from a free-kick on 63 minutes before the referee ruled out the rebound from Bakayoko.

O’Malley then denied Hiwula as the Posh defence, all at sea, allowed another chance on their goal. Burge did well to deny Toney at his feet after a clever pass from Tomlin as Posh tried to find a goal to set up a grandstand finish.

Maddison saw a tame left-footed effort gathered by Burge who despite the score-line was still the best player on the pitch. Eleven minutes added time was indicated by the fourth official. Tomlin was cautioned for a foul four minutes into added time.

Maddison saw a curling effort caught by Burge moments later as Posh tried in vain for a consolation goal. They did get one deep into stoppage time as REED’s effort was deflected into the bottom corner.