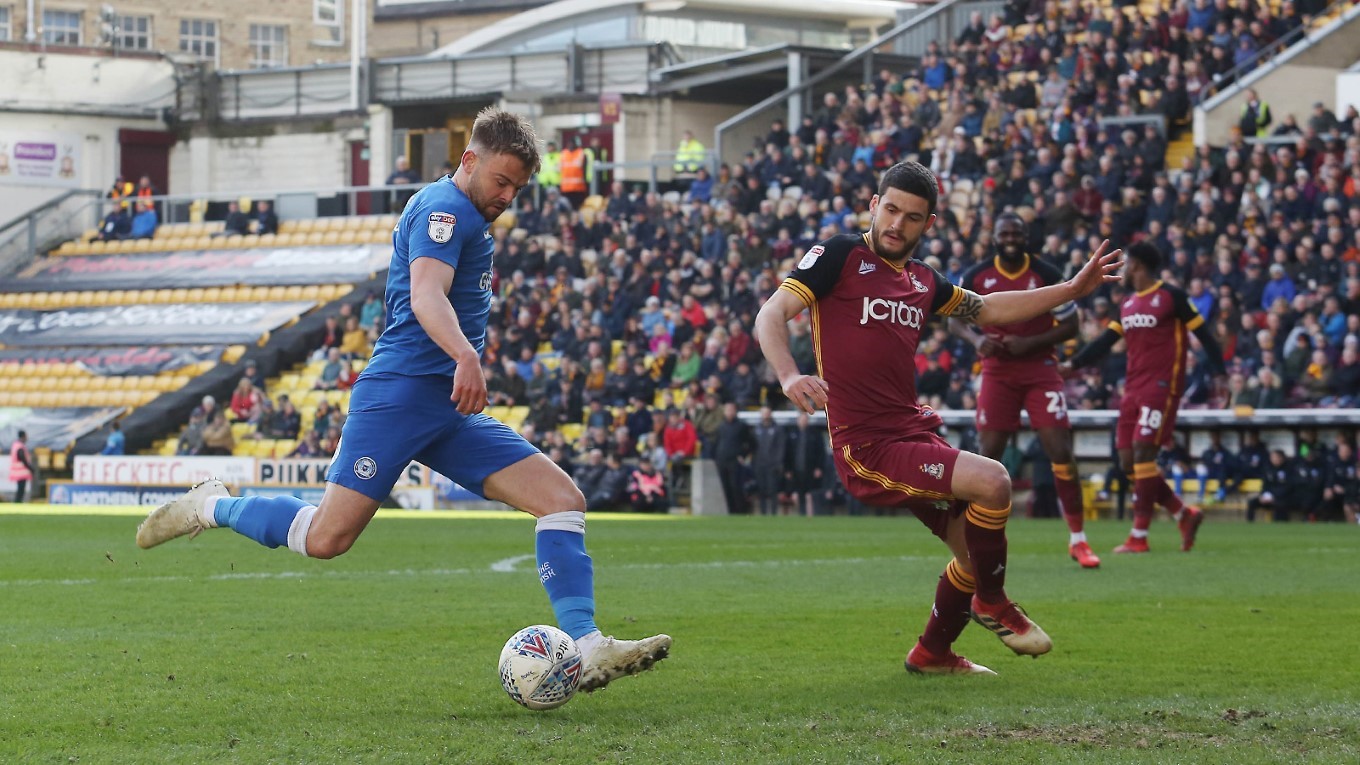 Peterborough United missed out on the opportunity to leapfrog Doncaster Rovers into the final play-off position as three goals in the final 20 minutes earned Bradford City a rather flattering 3-1 victory at the Northern Commercials Stadium.

Posh had the ball in the back of the net on four minutes as Matt Godden powered in a delicious Marcus Maddison cross, but the assistant referee had the flag raised and the goal was chalked off for offside.

Jacob Butterfield cracked the crossbar with a left-footed free-kick on seven minutes after Lafferty had been penalised for a foul. Tomlin sent an effort from 30-yards over the bar on 21 minutes after tricking his way past two defenders following a good spell of possession from Darren Ferguson’s men.

Ball was cautioned for a foul on Cooke on 24 minutes after a good turn from the former Middlesbrough man in the centre circle. Butterfield tested O’Malley from 25-yards on 32 minutes after Posh struggled to clear following good pressure from the hosts.

Maddison saw a shot blocked on 32 minutes after a good pass from Tomlin pierced the Bradford back-line in a wide area. Akpan fired over from 35-yards on 36 minutes for the home side as they tried to find the breakthrough.

Bradford were forced into a change on 39 minutes with Mellor limping off to be replaced by the experienced Paul Caddis. Godden saw a shot blocked by Woods in first half stoppage time after more slick play on the difficult surface from Posh.

Bradford had to make another change in stoppage time with Adam Chicksen replacing the injured Woods. O’Malley made a good save to deny Ball on 55 minutes after Posh gave away possession in a dangerous area.

O’Malley was called upon again on 57 minutes to beat out a fierce free-kick from Butterfield after Posh were penalised for a foul 25-yards from goal. Lafferty was denied a first Posh goal on 67 minutes as his brave header was saved by O’Donnell after a good pick out by Maddison.

Maddison saw a deflected free-kick acrobatically tipped over by O’Donnell and White saw a stabbed effort cleared from the resulting corner. However, Bradford got their noses in front on 69 minutes as a low effort from BUTTERFIELD found the bottom corner from 20-yards.

Bradford doubled the lead on 83 minutes as a counter attack led by Ball was finished off by DOYLE who somehow squeezed a left-foot shot into the bottom corner. The home side made it 3-0 on 86 minutes as O’BRIEN fired home with the aid of a deflection after a slick one-two with Doyle.

Posh pulled a goal back on 88 minutes as MADDISON won and converted the spot-kick, tucking the ball past O’Donnell into the corner. Caddis was booked for his protests and Cooper was cautioned for a foul moments’ later.