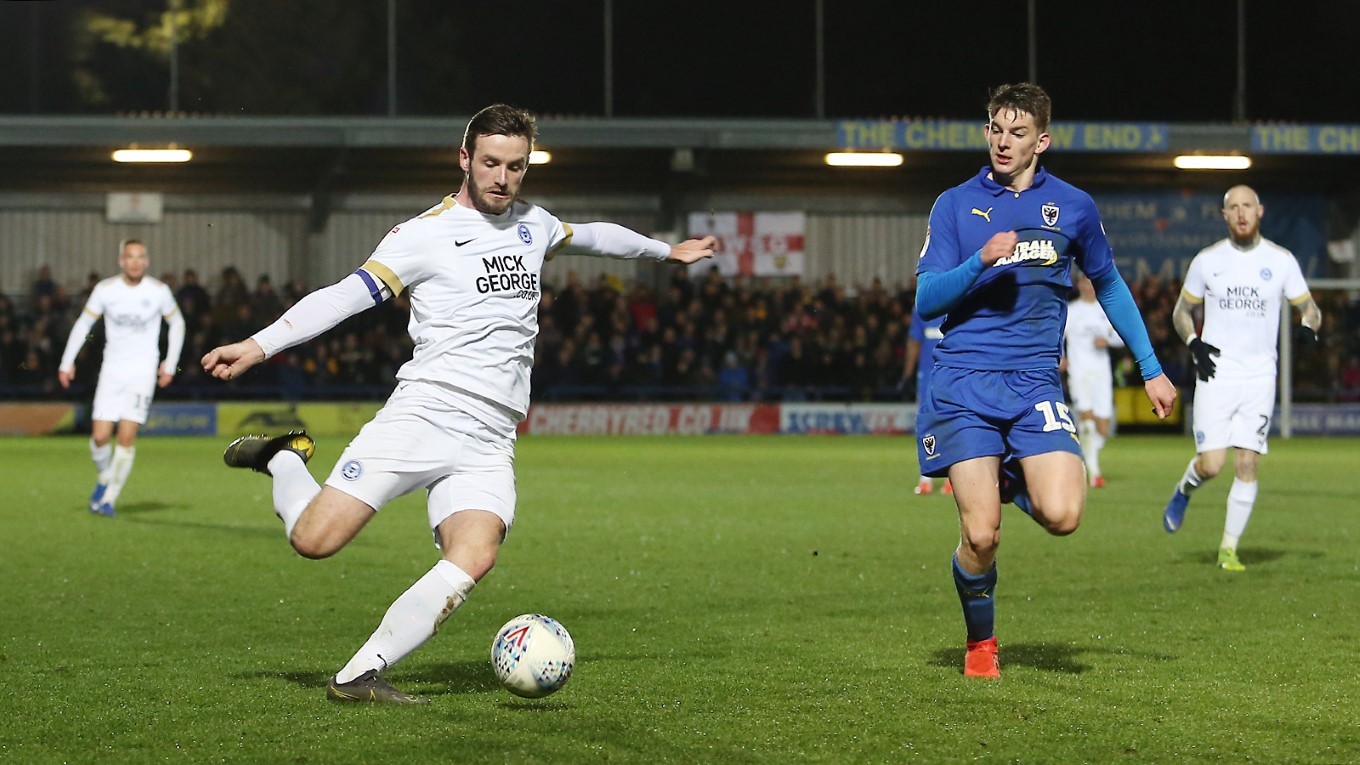 The referee Ollie Yates was centre stage as he gave a penalty in the final six minutes to earn the home side victory.

A controversial penalty kick from Joe Pigott earned AFC Wimbledon a 1-0 victory at the Cherry Red Records Stadium as the home side earned all three points in a game that saw Posh have another goal chalked off for offside at 0-0.

Referee Ollie Yates awarded a spot-kick for an alleged foul by Rhys Bennett but video footage confirms what everyone suspected originally that the substitute Connolly had bought the penalty kick, throwing himself to the floor inside the box.

The home side made a strong start to the contest, winning three early corner kicks, the latter of which was eventually cleared off the line by Daniel Lafferty after a looping header at the near post by Pigott.

O’Malley was well positioned to keep out a floated Wordsworth effort on 17 minutes after Toney had been penalised for afoul on the near side. Toney did well to show a clean pair of heels on 19 minutes to get away from his marker, but his cross-shot was parried by keeper Ramsdale and then hacked clear by Thomas.

Godden sent an effort from 30-yards wide of the target on 23 minutes after linking well down the left hand side with Lafferty as Posh pressed. Seddon was kept out by O’Malley on 33 minutes after timing his run into the box to perfection, his glancing header was straight at the Posh shot-stopper.

Ramsdale did well to keep out a Godden side-foot as he guided a long-range Maddison volley back towards goal. Reed saw a deflected shot from long-range shovelled behind by Ramsdale before White sent a 35-yard curler well wide.

Toney was superbly denied by the fingertips of goalkeeper Ramsdale on 55 minutes after a clever flick on by Godden. From the resulting corner kick, a Bennett header caused all manner of confusion at the back for the Dons, eventually they stabbed it behind for a corner kick.

Maddison was denied by Ramsdale moments later after a wonderful run which saw him beat two defenders before cutting onto his favoured left-foot, his fierce drive well kept out by the keeper. Toney was then a whisker away from breaking the deadlock as he met a low Naismith centre, but he couldn’t wrap his foot around it enough and it crept wide.

The hosts made a double change on 65 minutes with James Hanson and Dylan Connolly introduced. Posh had the ball in the back of the net on 68 minutes as a low drive from Naismith was parried into the path of Toney by Ramsdale but the offside flag was raised somewhat delayed and the goal was chalked off.

Maddison was cautioned on 73 minutes by the referee Mr Yates for a foul, the first booking of the evening dished out by the official. Substitute Connolly struck the bar from distance on 75 minutes as the Dons came close before Sillock was booked for a cynical foul on Toney.

Posh introduced Kyle Dempsey for Cooke moments later as Darren Ferguson made his first switch. Tomlin replaced Godden and made an immediate impact, clearing off the line to keep out a towering Nightingale header from a corner kick.

On 85 minutes, Rhys Bennett was shown a straight red card for bringing down Connolly as he raced onto a long ball and the Dons won a penalty kick. PIGOTT stepped up and fired straight down the middle to give the home side the lead.

Pigott flashed a shot wide on the counter attack as Posh piled bodies forward as six minutes of added time was indicated. Reed was booked for dissent as the ref waved away protests for a penalty as Tomlin went down in the box.