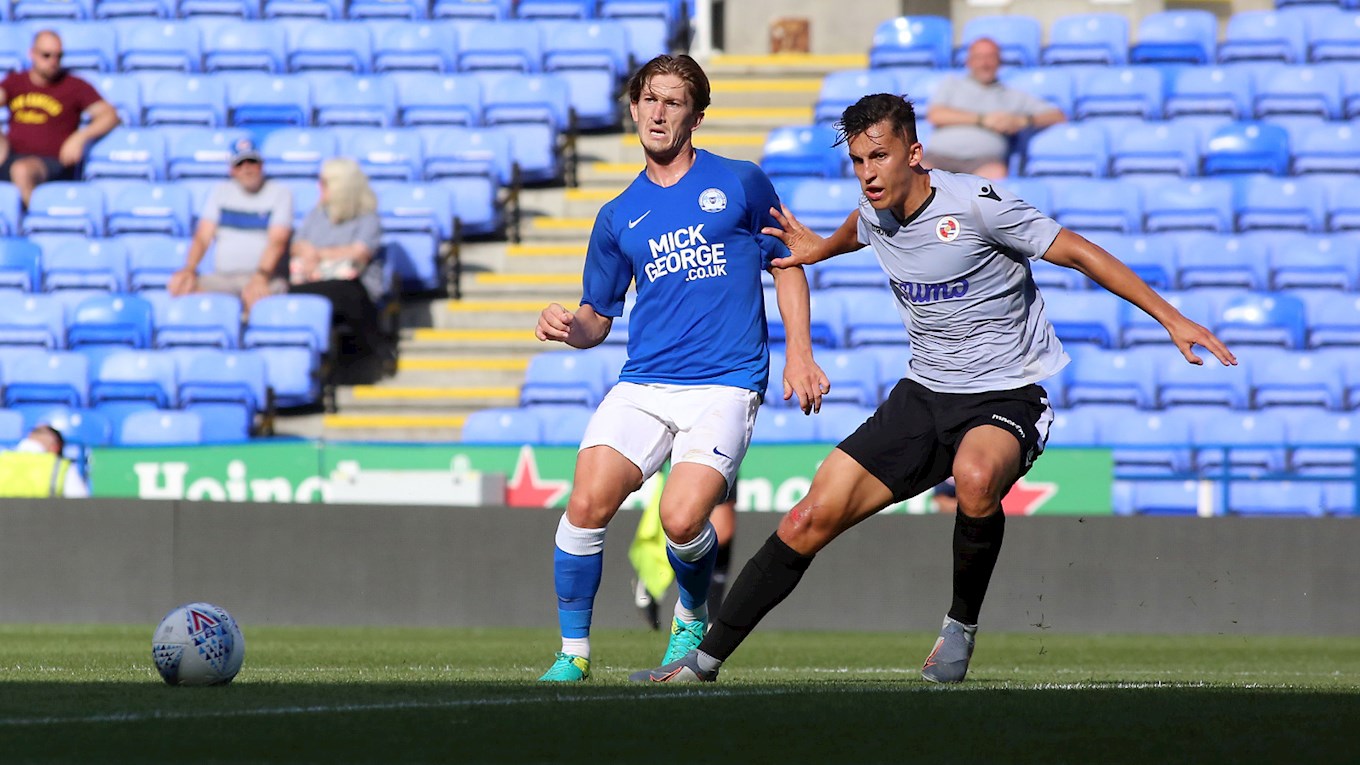 Match report for Reading vs Peterborough United on 24 Jul 19

Ivan Toney and Mo Eisa continue scoring run, but Posh beaten for the first time in pre-season at Reading.

Peterborough United manager Darren Ferguson was took plenty of positives from his side’s display against Sky Bet Championship side Reading on Wednesday evening, but his team came away from the Madejski Stadium in the wrong end of a six goal thriller.

On a swelteringly hot afternoon, it was Darren Ferguson’s men who made the brighter start, keeping possession comfortably and it was Posh who created the first opportunity of the game as good pace and strength from Eisa down the right hand side saw him progress into a dangerous area and his cut back perfectly picked out Toney, but his first time effort was saved by Virginia.

Eisa fired wide from distance after good initial work from Maddison and Toney as Posh continued to look threatening. Maddison was next to try his luck but his curler from distance cleared the crossbar after a good burst from Woodyard.

The home side opened the scoring rather against the run of play on 21 minutes a corner from Swift was flicked on and defender Tyler BLACKETT somehow squeezed the ball over the line from close-range with back to goal.

It was 2-0 to the Championship side on 38 minutes as a pass out of defence from Kent was intercepted by Swift and he picked out the pacy winger BARROW who took a touch before firing high into the net to double the advantage for the Royals.

Posh reduced the arrears on 43 minutes and it was a good piece of wing play from the returning Maddison, who took a touch, beat his man and delivered an inch-perfect cross for TONEY who swept home past Virginia.

Posh made a pre-planned change at the break with Harrison Burrows replacing Maddison. Posh should have been level moments after the re-start as the ball dropped at the feet of Eisa in space in the box, but leaning back, he saw his rasping shot crack against the crossbar before bouncing to safety.

Swift fired wide at the other end from the edge of the box as the second half continued at quite a lively pace. Posh drew themselves level on 52 minutes and it was a super strike from Mo EISA, who profited from some good pressing in midfield to rasp home a drive past Virginia and into the back of the net.

Parity didn’t last long though as moments later, the Royals are back in front and it is a stunning goal from Jon SWIFT who curled into the top corner from close to 30-yards leaving Pym with no chance. Dembele fired a free-kick from long-range two minutes later after he was felled following some good close control.

The home side extended their advantage to 4-2 as BARRETT twisted and turned and fired a low shot past Pym and into the bottom corner. Dembele showed excellent feet to beat his man and burst into the box on 65 minutes but his shot was saved by the legs of the keeper by the near post.

Pym made a good stop to keep out Meite’s effort after a bustling run on 73 minutes before Posh replaced Boyd with Kyle Barker. Ferguson said afterwards: “I am really pleased with the players. There lots of positives. In spells we were outstanding. We have to work on a few things naturally when you come up against a Championship side, but the lads were good.

“My strikers scored goals, we created lots of opportunities and we got plenty of good fitness into the players on a very hot day. We now look ahead to Grimsby and then the real stuff begins against Fleetwood.”