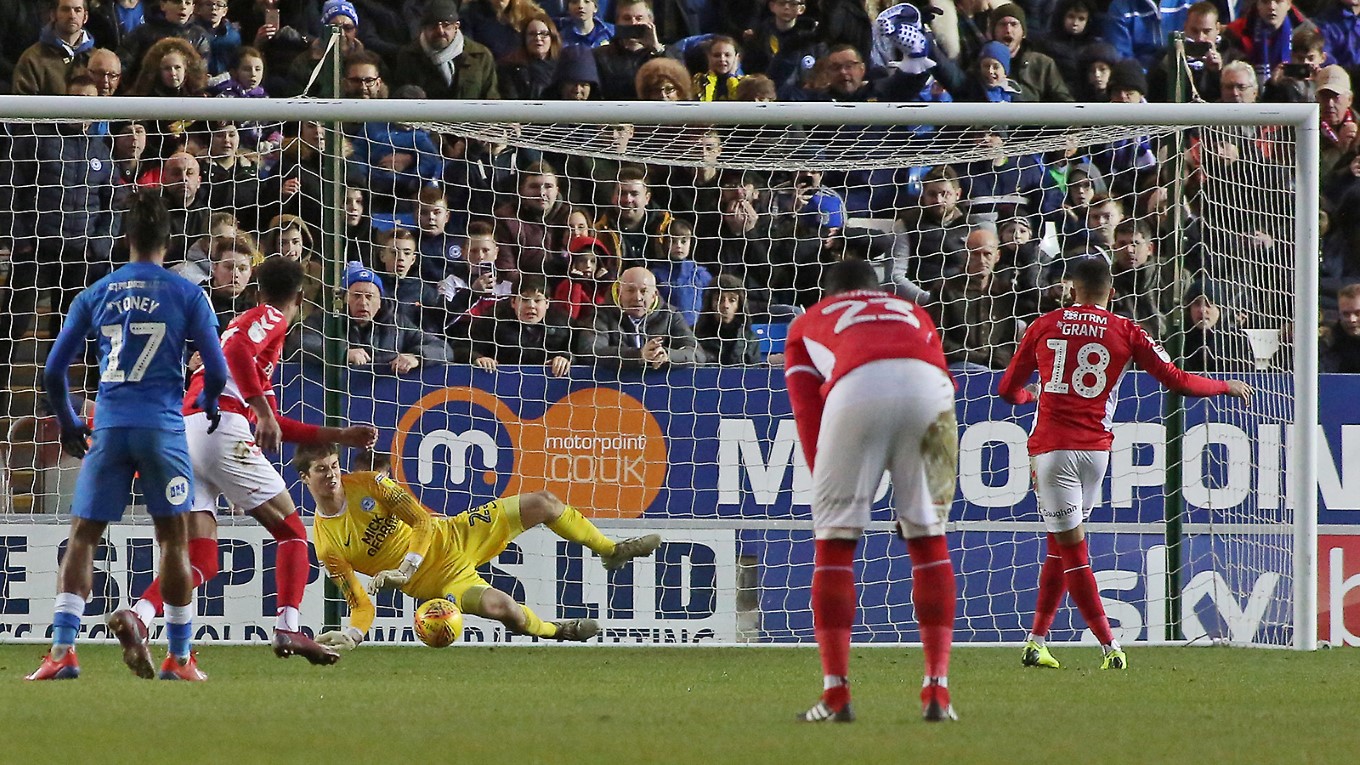 Peterborough United and Charlton Athletic played out an entertaining 0-0 draw at the ABAX Stadium.

Conor O’Malley produced a second half penalty save to preserve a clean sheet for Peterborough United following a hard-fought 0-0 draw at the ABAX Stadium in front of just over 9,000 supporters.

Ivan Toney saw an ambitious over-head kick gathered by goalkeeper Dillion Phillips on two minutes as Posh made a positive start. Matt Godden headed a teasing Marcus Maddison centre over the bar moments later but in fairness he was under a lot of pressure from the centre back Bielik.

Toney fired wide of the near post following an intelligent flick-on from Godden on the quarter hour mark. Josh Cullen saw an effort tipped over by Irishman Conor O’Malley on 26 minutes as he ghosted in behind the Posh defence at the back post.

Williams was cautioned for diving on the half hour mark as he threw himself to the floor in an attempt to win a spot-kick. Referee Mr Webb wasn’t buying it and reached for his pocket quickly. Posh broke at pace on 39 minutes from one end of the pitch to the other with Lafferty, Maddison and Tomlin all involved, the latter’s low cross slid behind by Bauer for a corner.

Godden fired wide of the near post moments after the half-time whistle after linking well with Ivan Toney. At the other end, the highly-rated Ahearne-Grant saw a deflected effort smack against the crossbar after a poor defensive header from Rhys Bennett.

O’Malley made a routine stop to keep out a long-range strike from Reeves on 50 minutes before the same player flicked a volley over bar from a right-wing centre. Darren Pratley headed a cross wide of the target on 58 minutes as the visitors enjoyed a spell of possession.

Bielik was cautioned for a foul on Toney on 67 minutes as Posh prepared their first change of the afternoon. Lafferty saw a shot from distance pushed around the post by goalkeeper Phillips on 71 minutes as Posh screamed that Bielik should have been dismissed for an obvious tug on the shirt of Maddison.

Reeves fired wide from 20-yards on 75 minutes after Posh failed to clear as Charlton pressed for the breakthrough. Charlton were awarded a spot-kick a few moments later as Naismith was penalised for a foul on Cullen. Ahearne-Grant took the spot-kick but O’Malley produced a good save to keep the scores at 0-0.

Naismith fired over in stoppage time with a rasping drive as four minutes were indicated by the fourth official.