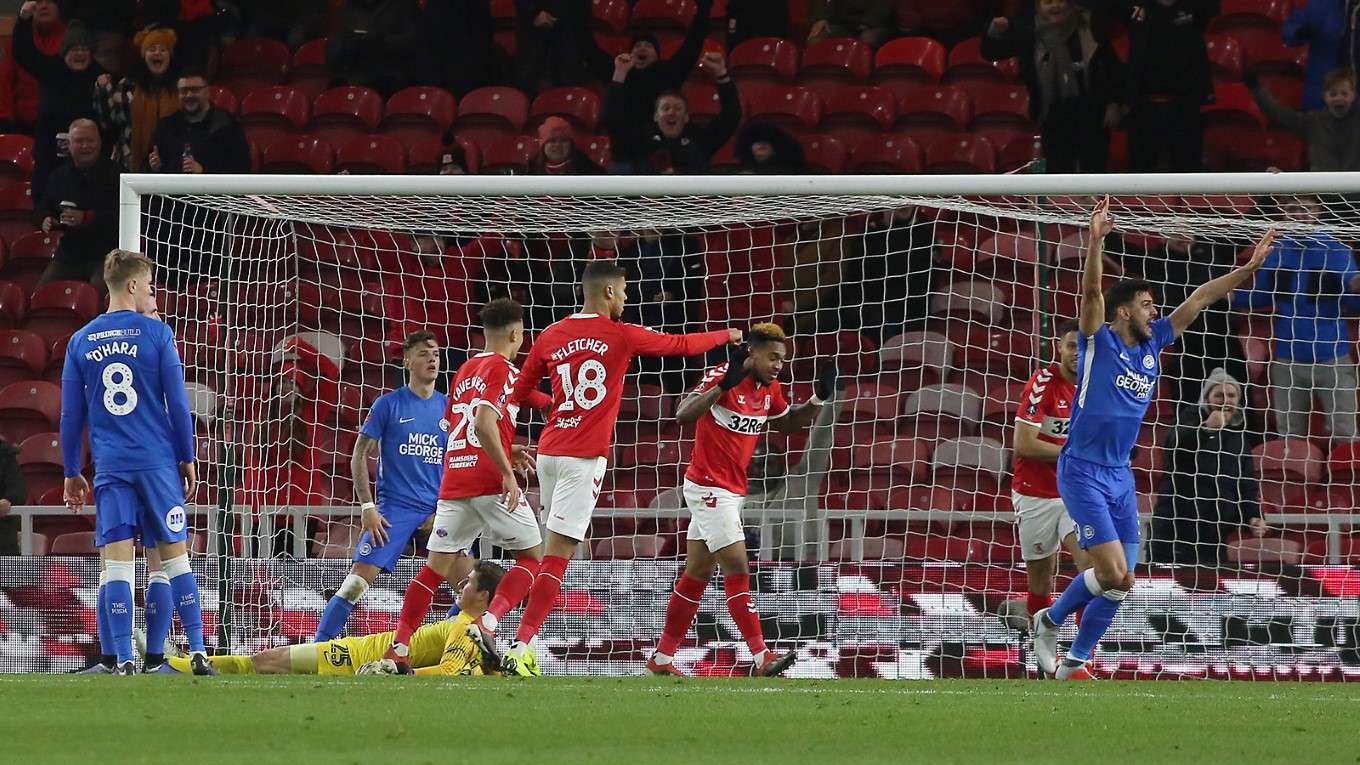 Match report for Middlesbrough vs Peterborough United on 05 Jan 19

Hosts score five times in the second half to condemn Posh to cup defeat.

Sky Bet Championship side Middlesbrough were second best in the first half but showed their class in the second period with five goals without reply including a brace from former Peterborough United front man Britt Assombalonga.

George Friend produced an excellent tackle to stop Ivan Toney from getting a shot on goal inside the opening five minutes as Posh made an assured start. Former Manchester United youngster Paddy McNair fired wide on the volley moments later after the hosts found a bit of room down the left hand side to get into a crossing position.

Siriki Dembele was a whisker away from opening the scoring on 24 minutes as he let fly from 25-yards, the ball rolling inches past the far post with the keeper beaten. Toney powered a header over from an in-swinging Lafferty free-kick on 29 minutes after Woodyard did well to draw a foul in a wide area.

White was cautioned for a foul on the touchline by referee James Linington on the half hour mark. Posh squandered a glorious chance a few moments later after a superb move, Ward feeding Toney, he left the defender on his backside but skied his effort with his left-foot from eight yards.

Dembele fired wide from 25-yards after a strong run a minute before the break as Posh found more room to run at the Boro’ back-line. Leadbitter was cautioned for a trip on Toney in first half stoppage time. Middlesbrough made a change at the break with Lewis Wing replacing van la Parra.

The home side didn’t take long after the interval to get their noses in front as a Fletcher shot was deflected onto the crossbar by O’Malley and Britt ASSOMBALONGA was there to nod home the rebound from close-range in the 47th minute.

The hosts doubled their advantage on 49 minutes as FRIEND bundled home from close-range after Fletcher had used his strength to get past Ward in a wide area. Toney saw a well struck free-kick gathered by Konstantopoulos on 55 minutes after Dembele was felled.

Matt Godden replaced O’Hara just before the hour mark as Steve Evans made his first change of the afternoon. Middlesbrough made it 3-0 on 62 minutes as substitute WING rifled home a superb effort from 30-yards past O’Malley and into the corner of the net.

Toney hammered a free-kick into the wall on 67 minutes as Posh tried to find a route back into the contest. Middlesbrough made it 4-0 on the 70th minute mark and it was a well worked goal, Gestede with an excellent flick into the path of ASSOMBALONGA who made no mistake with his left-foot.

Cooke fired wide from distance on 85 minutes as Posh tried to fashion out a consolation goal. Toney did crack the bar in stoppage time via the hands of goalkeeper Konstantopoulos but it was not to be for Posh who exit the competition at the third round stage.