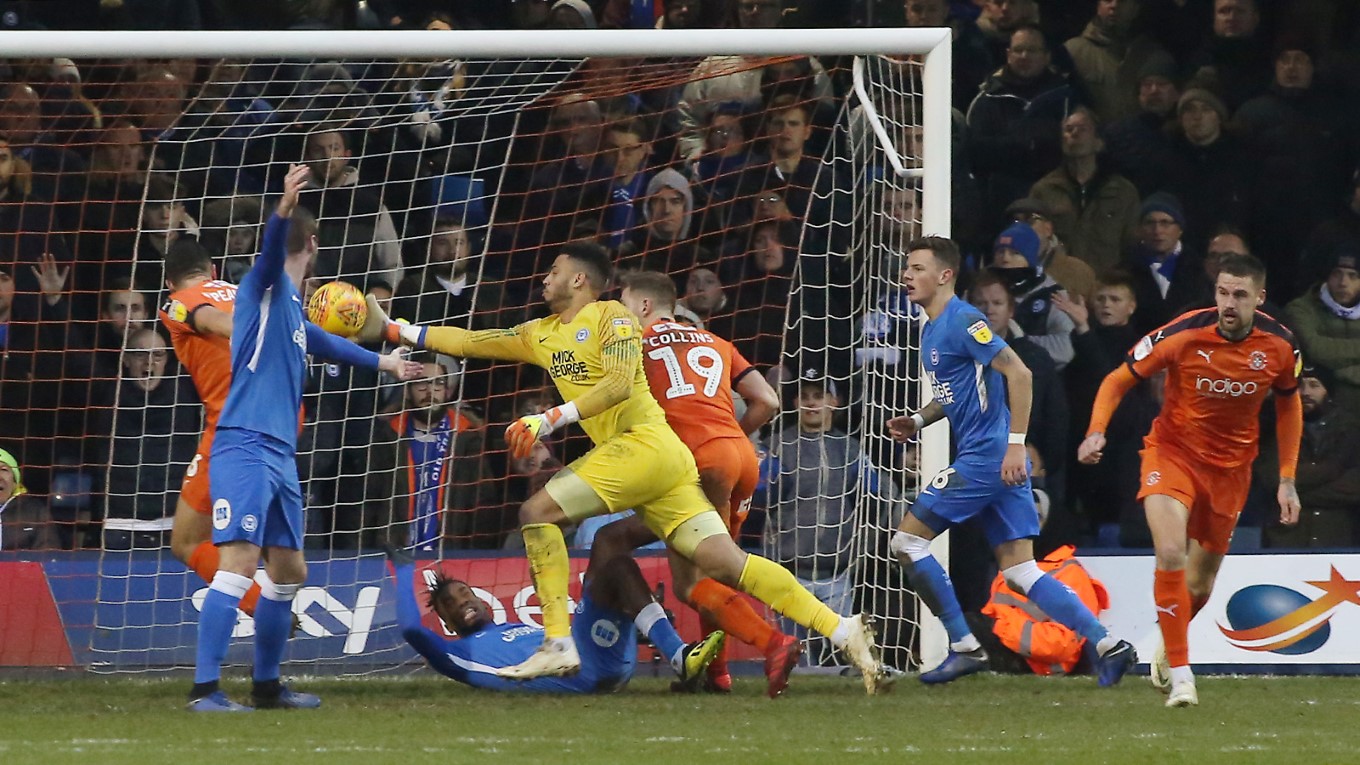 Luton Town strengthened their automatic promotion credentials with a 4-0 win over Posh who lost Ryan Tafazolli to a straight red card.

Peterborough United played over an hour with 10-men and promotion-chasing Luton Town put Posh to the sword at Keilworth Road as a James Collins hat-trick and a Luke Berry strike earned the Hatters a 4-0 victory in front of over 10,000 supporters.

Luton got their noses in front on eight minutes as a low cross from Stacey was converted from close-range by James COLLINS. Pearson was cautioned for a foul on Toney on 11 minutes as Posh tried to shake off the disappointment of conceding so early at Kenilworth Road.

Tomlin curled a free-kick straight into the wall from the resulting free-kick and then Toney lashed a shot well wide from the rebound. Tomlin fired wide from 25-yards on the quarter hour mark after finding a bit of room as Posh came close to finding a leveller.

Maddison tested Shea from distance on 19 minutes after skipping past two challenges on the left hand side. Maddison sent a free-kick over the crossbar on 22 minutes after Tomlin had again been upended by McCormack.

Tafazolli was shown a straight red card by referee Mr Coote on 24 minutes for a tackle on Shinnie on this near side. Posh were 2-0 down on 26 minutes as COLLINS converted again from six-yards as Posh failed to track another runner down the left.

Posh made an immediate change at that point with Joe Ward replacing Dembele. Chapman produced a superb stop to tip a drive from Berry around the post on 32 minutes before Mpanzu fired wide from distance.

Collins squandered a fine chance for the hat-trick on 36 minutes following a poor Naismith clearance but he fired wide with his left-foot. Chapman was well placed to deny Lua Lua on 36 minutes as Luton threatened a third.

Posh made a double change at the break with Alex Woodyard and George Cooper replacing Tomlin and Dempsey. It was 3-0 on 52 minutes as COLLINS completed his hat-trick, collecting a pass from Lua Lua and firing past Chapman with his left-foot.

Collins squandered a good chance to make it 4-0 on the hour mark after another poor pass in the Posh midfield, this time the hat-trick hero blazed over with his left-foot. Maddison was cautioned for a foul moments later on Shinnie.

Luton made it 4-0 on 65 minutes as former Cambridge United midfielder Luke BERRY produced a fine turn and curled the ball past Chapman. Luton made a double change on 69 minutes with ex-Posh loanees George Thorne and George Moncur replacing Shinnie and McCormack.

Toney was booked on 72 minutes for a foul by referee Mr Coote. White produced a superb clearance off the line to keep out substitute Moncur as he came desperately close to a debut goal for the Hatters.  Maddison rifled a shot over the top from 30-yards as Luton gave away possession as Posh tried to grab a consolation goal.