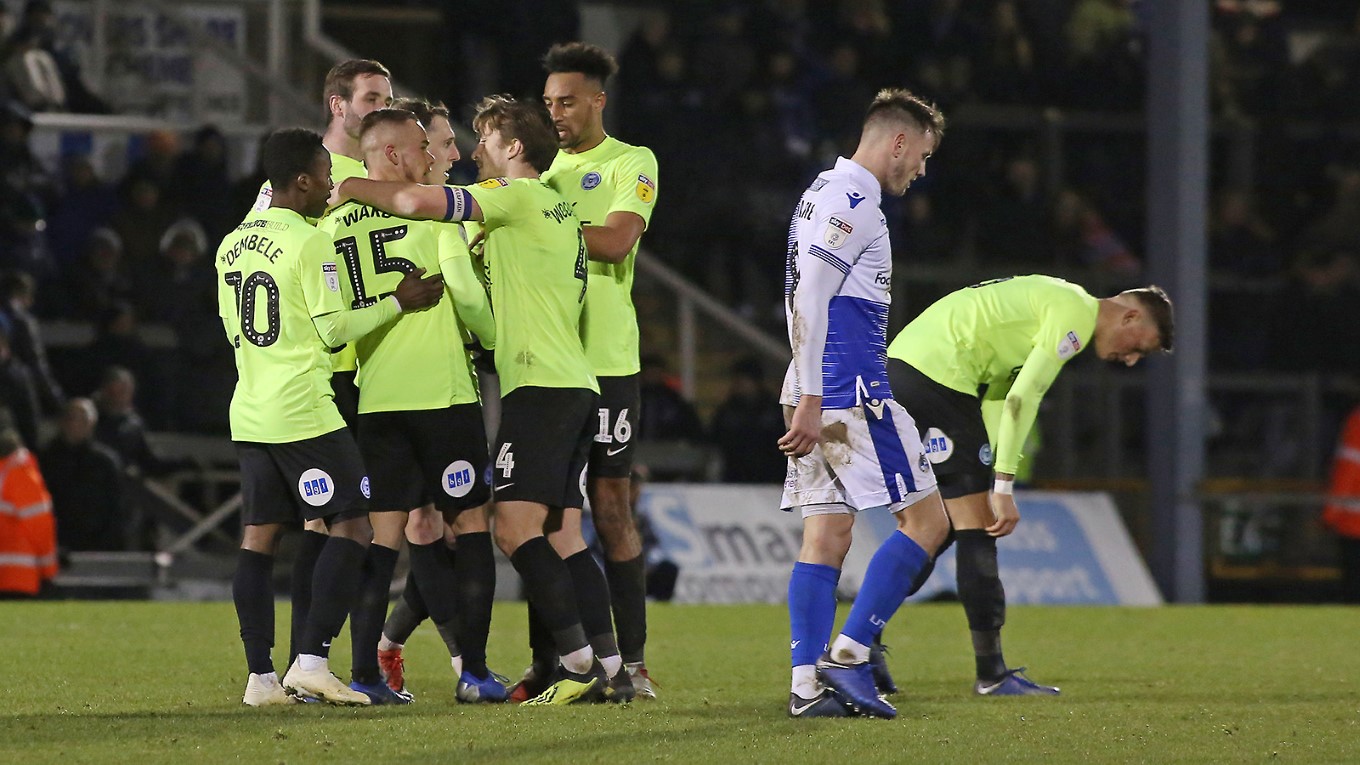 Peterborough United secured a point from Darren Ferguson’s opening game in charge as substitute Joe Ward’s superb strike from distance on the 90-minute mark earned a 2-2 draw against Bristol Rovers at the Memorial Stadium.

Liam Sercombe sent a speculative volley over the crossbar inside the opening three minutes at the Memorial Stadium. The hosts opened the scoring on eight minutes and it came from the spot as Rhys Bennett brought down Tom NICHOLS in the box and the former Posh man stepped to coolly convert the penalty kick.

Tomlin sent a cross-shot inches wide of the upright on 16 minutes after good patient football from Darren Ferguson’s men. White sent a shot over the top after a good dribble out of defence moments later as Posh began to settle after the shock of the opening few minutes.

Toney was denied an equaliser by a good save on 27 minutes after an excellent reverse pass from Tomlin. Lines hit the side-netting with a shot from a tight angle after a clever one-two on 33 minutes as the Pirates found some room down the Posh left.

Posh levelled the scores on 37 minutes, Tomlin with a superb reverse pass into the path of Ivan TONEY who rounded keeper Bonham and slotted into the gaping net for his 18th goal of the campaign.

The hosts got themselves back in front on 43 minutes and it was a comedy of errors for Posh as they lost three tackles and then as the ball broke, CLARKE lobbed an out of position O’Malley. Toney squandered an unbelievable chance to level in stoppage time after again being picked out by Tomlin but he stabbed wide from close range.

Posh carved out another good opportunity on 48 minutes after an excellent pass from Dempsey picked out Godden but his powerful drive was tipped over by Bonham. Tomlin was cautioned for a foul on 55 minutes by referee Mr Collins.

Lafferty curled a free-kick straight at Bonham on 57 minutes after Tomlin was upended 30-yards from goal. Posh made a double change on 65 minutes with Marcus Maddison and Joe Ward replacing Dempsey and Tomlin. Siriki Dembele replaced Godden in the final change with 15 minutes on the clock.

Posh got themselves level on 90 minutes and it was a stunning strike from substitute Joe WARD who sent a rasping drive into the top corner from 25-yards. The goal coincided with four minutes of added time being indicated by the fourth official.