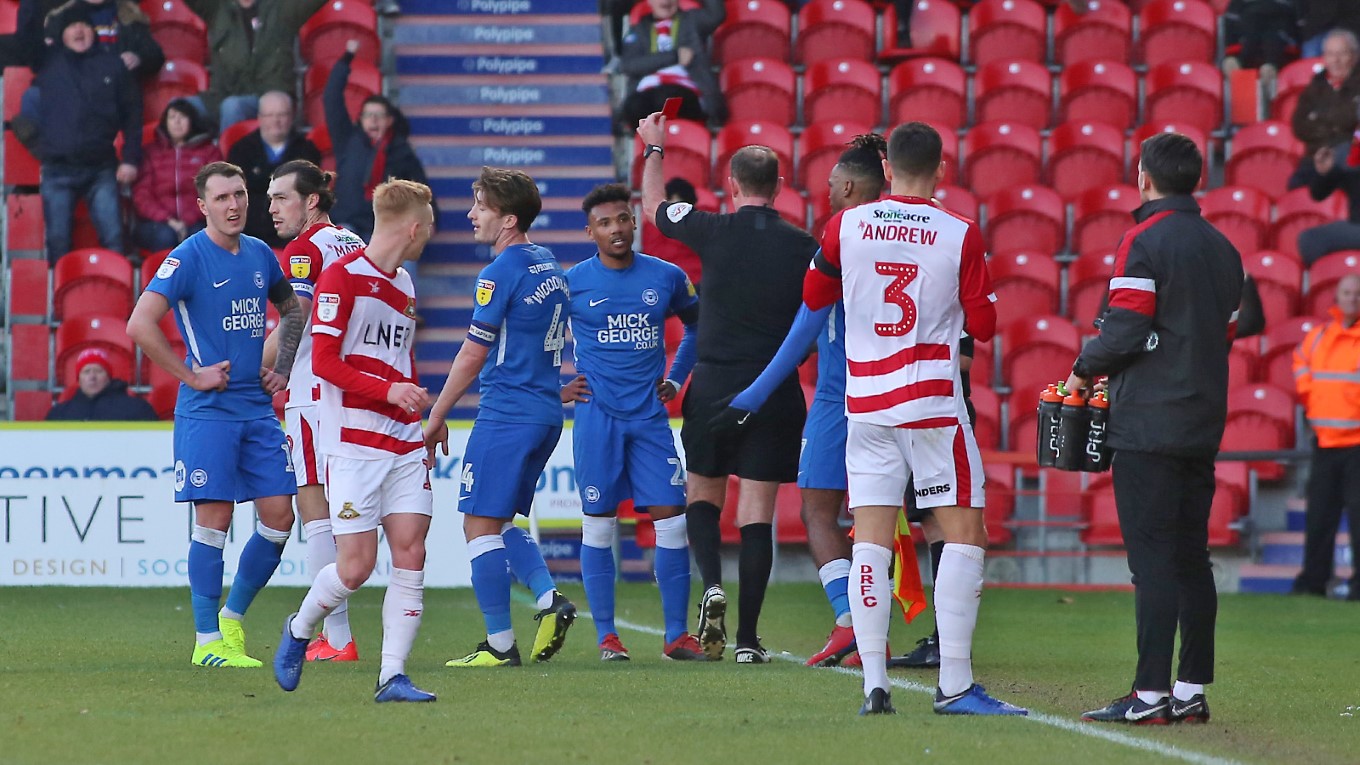 Referee Carl Boyeson took centre stage again as Doncaster Rovers defeated Peterborough United 3-1 at the Keepmoat Stadium with the official dismissing Tyler Denton in the first half for two cautions and then failing to send Mallik Wilks off for a headbutt with the on-loan Leeds United forward going on to play a significant part in the second period.

Posh made a bright start and got their reward as on six minutes as George COOPER, given a start in the side by Darren Ferguson, collected a loose ball just inside the penalty area and curled a fine right-footed effort past goalkeeper Marosi and into the back of the net.

John Marquis wasted a golden chance to level on 17 minutes after a deep Wilks cross picked him out but the top scorer stabbed his shot wide of the target from eight yards. Posh got away with another one on 22 minutes as Denton inadvertently headed past his own goalkeeper, the ball striking the post before Wilks stabbed wide.

Posh hit the crossbar on 28 minutes as a corner from Maddison was glanced on by Bennett at the near post. Denton was cautioned for time wasting on 34 minutes by referee Mr Boyeson. Conor O’Malley produced a fine stop with his legs to deny Wilks on 43 minutes after the on-loan Leeds man had tricked his way another Leeds loanee Denton.

It was a nightmare few minutes for Denton as moments later he was shown a second yellow card for a foul on Wilks on the near touchline. Three minutes of added time was indicated by the fourth official as Posh tried to reshuffle their pack.

Incredibly Wilks then got away with a headbutt on Toney in stoppage time. The referee cautioned him. Crawford sent a shot well wide on 49 minutes as Doncaster tried to assert themselves in the second half with an extra man.

O’Malley produced a good stop to divert a low shot from Marquis around the post on 50 minutes. Toney was then denied by a fine stop from Marosi after a wonderful cross from Ward picked out the striker at the back post.

Whiteman fired over from long-range on the half volley on 54 minutes after three brave Posh blocks following a Marquis header. Downing was cautioned for a foul on Toney as the hour mark approached. Just after the hour mark, Doncaster drew themselves level as a deep Andrew corner kick was bundled home, perhaps by White at the back post.

The home side got themselves in front on 66 minutes, a Bennett sliced clearance caused a problem, Wilks raced through, rounded the keeper, his shot hit the crossbar, hit Naismith and rebounded oh so kindly for MARQUIS to lash the ball into the back of the net.

Doncaster made it 3-1 in controversial circumstances on 74 minutes, O’Malley bowling the ball out of play because Ward was in need of treatment, but off the pitch. Doncaster knowing he was off the pitch took the throw in and SADLIER scored.