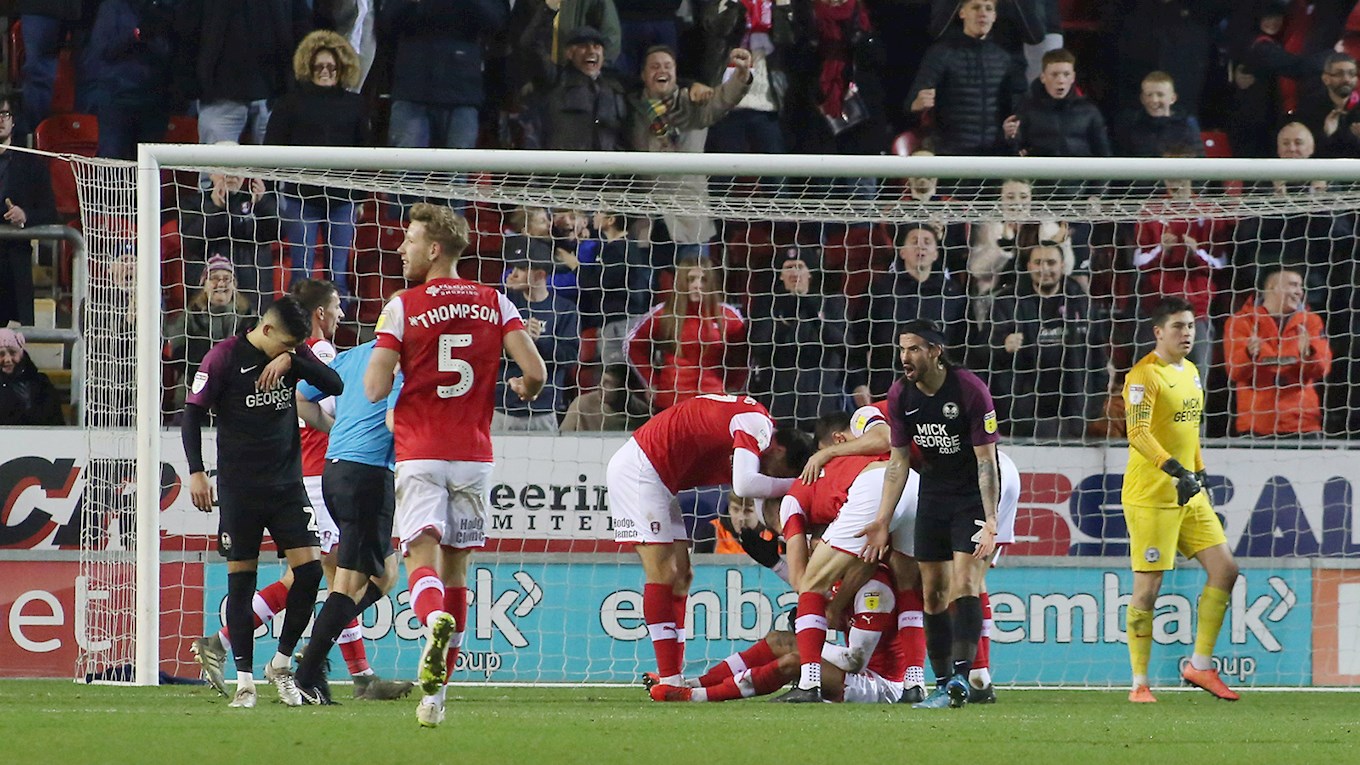 Peterborough United suffered a second defeat in a row as Rotherham United took advantage of a lacklustre display by Darren Ferguson’s men to claim a 4-0 victory at the New York Stadium on a day where both teams ended with 10-men, Frankie Kent the man dismissed for Posh when the score was at 1-0.

Carlton Morris headed over on six minutes for the hosts after a good cross into the box from Thompson. Burrows sent a right-foot shot from the edge of the box wide on his right-foot on 21 minutes as Posh kept the ball alive from a Mason cross.

Olosunde tested Pym from distance on 22 minutes, but the keeper was up to the task, holding onto the ball well. Rotherham were forced into a change four minutes later with Clark Robertson limping out of the action to be replaced by the experienced Richard Wood.

Thompson headed over a corner kick on 37 minutes as the Millers piled on the pressure. Posh had a golden chance to find the breakthrough on 41 minutes from a looping Mason cross but Toney couldn’t divert his header past Iversen from 10-yards.

Posh made a change at the interval with Joe Ward replacing Harrison Burrows in midfield. The home side got their noses in front on 49 minutes as a cross into the box was headed home from close-range by substitute WOOD.

Posh were reduced to 10-men on 53 minutes as Kent was shown a second yellow card for a second foul in as many minutes as the start to this second period went from bad to worse for Posh. The home side doubled the lead on 67 minutes as Matt Crooks’ effort was deflected past Pym by the retreating Butler.

Rotherham were restricted to 10-men themselves on 72 minutes as Mattock was shown a straight red card for a ridiculous head butt on Toney. It was 3-0 on 77 minutes as a corner was met by Wood and struck Ward before rolling into the back of the net for the second own goal of the afternoon.

Vassell clipped the outside of the post on 86 minutes as Posh were caught in possession up the field as Rotherham came close to a fourth goal. Smith was denied a goal at the death by a flying Pym stop as the game entered five minutes of added time.

It was 4-0 deep into stoppage time as former Posh striker VASSELL scored a stupendous over-head kick as Posh once again failed to clear a corner kick.