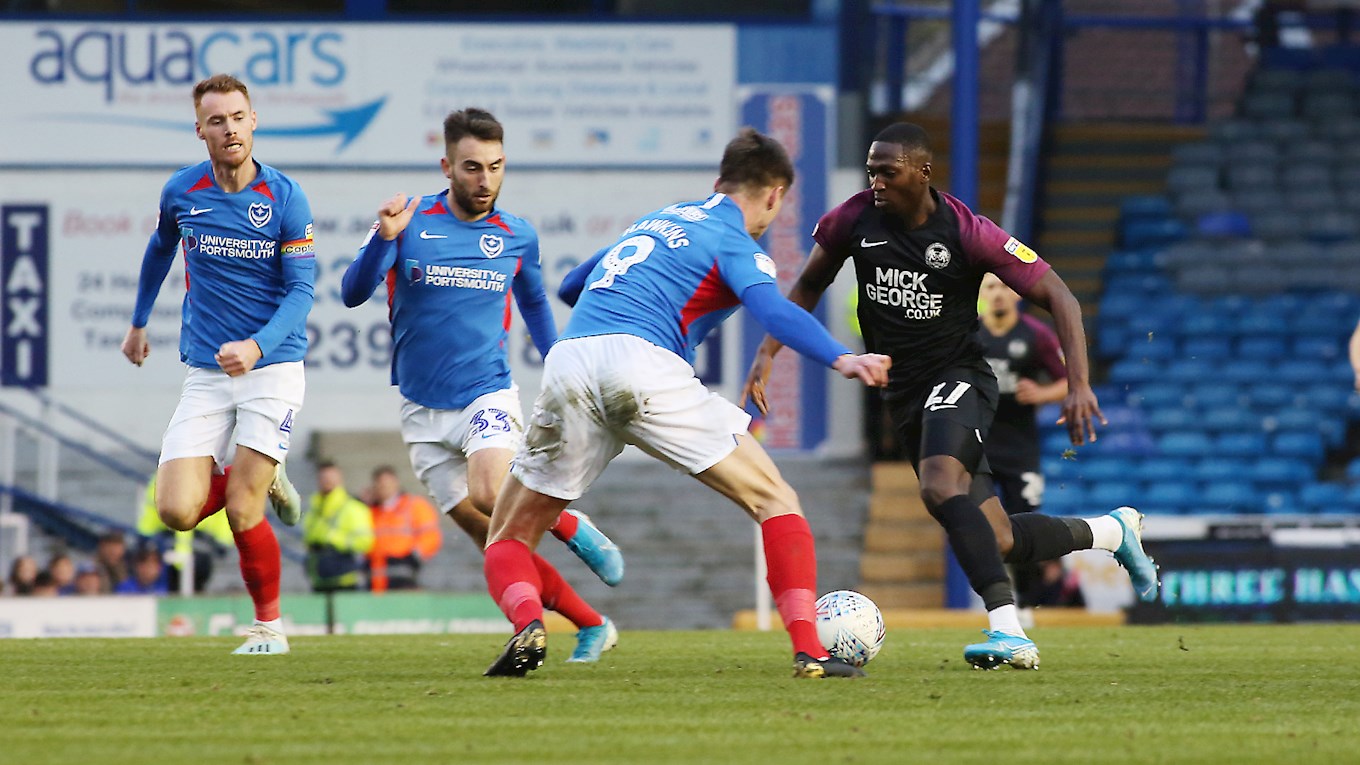 Match report for Portsmouth vs Peterborough United on 07 Dec 19

A Posh side depleted by injury and illness put in a superb performance to claim a 2-2 draw at Fratton Park.

Peterborough United recorded a 2-2 draw against Portsmouth at Fratton Park as a Darren Ferguson side depleted by injury and illness put in an excellent performance to deservedly take a point from an entertaining encounter in front of over 17,000 supporters.

Alex Woodyard was cautioned inside a minute for a hefty challenge as referee Charles Breakspear set down his stall early doors. Ronan Curtis saw a free-kick strike the wall on six minutes before his follow-up was also blocked by Kent.

On nine minutes, Posh got themselves in front as a cross from Dan Butler was sliced by Hawkins into the path of a sliding Ivan TONEY at the back post who converted for his 14th goal of the campaign. The home side had appeals for a spot-kick turned down on the quarter hour mark as Curtis went down in the box, but nothing was given.

On 25 minutes, the hosts levelled the scores following a controversial award of a free-kick on the edge of the box after an apparent foul by Reed. BROWN stepped up and drilled the set-piece low past Pym.

Posh had a glorious chance to retake the lead moments later as a free-kick somehow reached Kent at the back post but his side-foot was kept out by the keeper with penalty appeals then waved away as the ball appeared to strike the arm of Burgess.

Pym made a good stop to keep out a low strike from Williams on 34 minutes after Posh could only half clear a cross into the box. MacGillivray was well placed to keep out a toe-poked Thompson effort on 43 minutes after a good cross to the back post by Kanu.

Eisa was booked on the stroke of half-time following a tussle on the touchline. Pym did well moments after the re-start to keep out Marquis as the hosts got in behind within a minute of the second half commencing.

The home side got their noses in front on 53 minutes as HARRISON fired low on the turn and goalkeeper Pym couldn’t keep it out, the ball squirming over the line. Less than 60 seconds later, after a booking for Burgess, Toney skied a shot on the half volley after a Reed corner caused panic.

MacGillivray produced a fine stop to keep out a low left-foot Thompson effort on 58 minutes after a fine crossfield pass from Reed. Posh made a change in personnel and system just after the hour with Serhat Tasdemir replacing Mason.

Brown went into the book for a foul on Kanu and Thompson followed him in the book for a foul on Harrison. Williams fired wide from 20-yards on 68 minutes as Portsmouth threatened a third. On 72 minutes, Posh drew themselves level and it was a superb team goal, Thompson started it with a charge into midfield, Reed drilled it out wide to Butler and his teasing cross was headed home by Mo EISA.

Curtis should have given the Pompey the lead again moments later from a corner, but he headed into the side-netting at the back post. Pym did well to keep out Harrison with his legs on 85 minutes after a bit of indecision at the back for Posh.