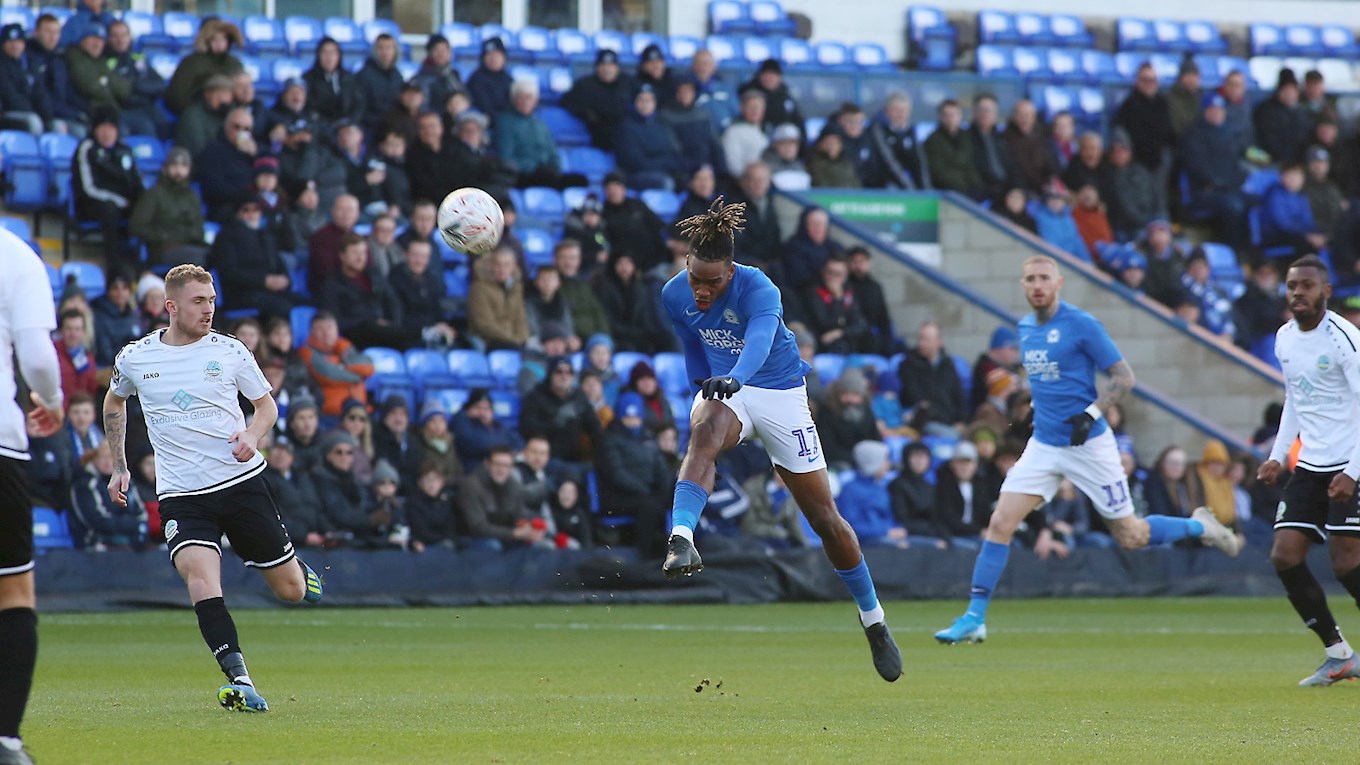 Ivan Toney and Mo Eisa both netted as Posh recorded a 3-0 win over Dover Athletic in the second round of the Emirates FA Cup.

Peterborough United added another strike to their stunning goal of the season competition as Ivan Toney netted an outrageous volley from 40-yards with goals from Mo Eisa and Frankie Kent securing a 3-0 victory over Dover Athletic on a day where numerous chances in front of goal were squandered.

Posh opened the scoring on seven minutes and it was yet another contender for goal of the season, this time from Ivan TONEY who thundered home a first time volley from long-range over a stranded Lee Worgan for his 13th goal of the season. It was an incredible effort and left the Dover goalkeeper in complete shock.

Toney nearly doubled the lead with another volley on 21 minutes after a lightening break which began with a throw out from Pym and ended with a cross into the box from Eisa following good work from Ward.

Reed saw a volley of his own held by keeper Worgan on 29 minutes after good persistence down the right from Ward. Beevers was booked by referee Mr Huxtable for a push on Modeste on 34 minutes, a very soft caution given the late challenges on Maddison throughout the first period. Taylor fired the resulting free-kick over the crossbar.

Cumberbatch was cautioned for a foul on Maddison on 37 minutes after a clever flick around the corner from the Posh winger. Eisa squandered a golden chance to double the lead moments later after Blake-Tracy beat the offside trap and squared the ball into his path, but he sliced wide of the target from close-range.

Rigg headed wide at the near post from a Taylor free-kick as the first half entered the final five minutes. Maddison skied an effort from 25-yards after doing well to advance into a shooting position less than 60 seconds later and the next move, he had another chance after a good threaded pass from Toney, but again, his shot went over the bar on his left-foot.

Eisa had a chance just after the break to make it 2-0 after beating the offside trap, but his curler was well kept out by Worgan with the ball just eluding Toney in the six-yard box. Toney couldn’t quite stretch high enough to divert a hanging Butler cross on target on 54 minutes as the chances continued to be created without a second goal arriving.

Keeper Worgan produced a fine stop to keep out Eisa after Toney burst clear on the left hand side, the keeper diving to his right to somehow divert the low shot around the post. Pym was called upon for his first save of the tie on the hour mark as he kept out a downward Havilland header from a set-piece.

Posh were dealt an injury blow on 73 minutes with former Kings Lynn man Blake-Tracy being carried off after a challenge on the far side. Pym did well to hold a low effort from Taylor on 75 minutes as Posh reorganised their defence.

Munns clipped the outside of the post with a curling effort on 76 minutes as Dover were a whisker away from levelling the tie. Posh doubled the lead on 79 minutes as a corner from Marcus Maddison was toe-poked home at the near post by Frankie KENT via the inside of the post.

Posh made it 3-0 on 84 minutes as substitute Serhat Tasdemir sprung the offside trap and squared for EISA who tapped home for his 13th goal of the campaign. Woodyard and Mason were both cautioned in the final 10 minutes by referee Brett Huxtable who suddenly got a penchant for reaching for the cards.

Eisa curled over deep into stoppage time and then Tasdemir side-footed wide before the referee brought an end to proceedings. The third round draw takes place on Monday evening from 7pm on BBC Two.