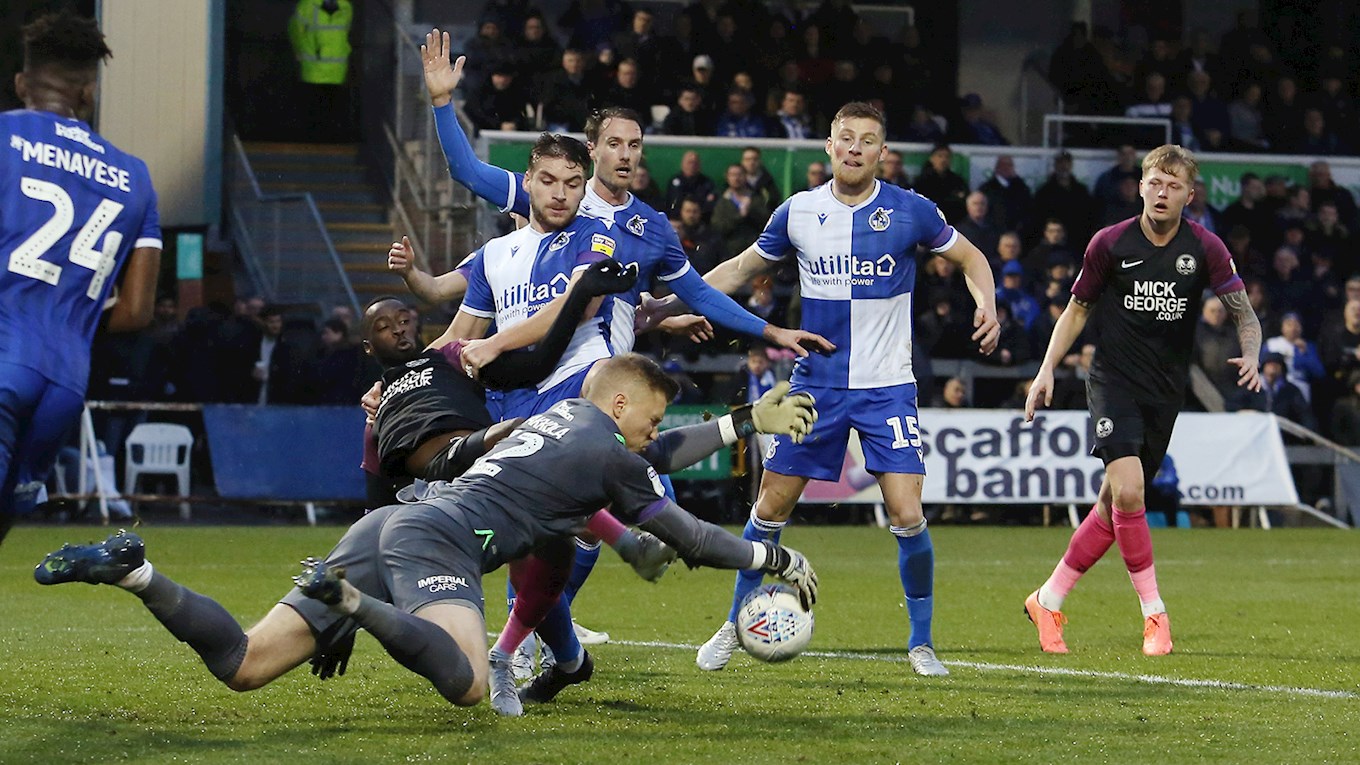 Posh drew 0-0 at Bristol Rovers in an entertaining encounter at the Memorial Stadium in Sky Bet League One action.

Peterborough United moved into the automatic promotion places with a 0-0 draw at fourth-placed Bristol Rovers and on another day, the injury-hit Posh side could have come away with all three points after seeing Mo Eisa’s close-range finish chalked off for offside.

Marcus Maddison made a bright start to the game, a number of teasing crosses caused a bit of panic for the Gas before his low strike from an acute angle went wide of the target. Posh had the ball in the net on 13 minutes as goalkeeper Jaakkola spilled a skidding Ward shot into the path of Eisa who tapped home, but the offside flag cut short any celebrations.

Sercombe whistled a shot over the bar on the half hour mark from a tight angle after a turnover of possession in midfield gave the Pirates an opportunity from long-range. Menaeyse produced a fine last ditch tackle to prevent Toney tapping in a driven Eisa cross on 33 minutes as Posh came close to the breakthrough.

Woodyard and Reed both saw shots blocked while a Maddison cross was parried by the keeper as Posh ended the first half dominating the ball. Butler was cautioned for a body check a minute into the second half by referee Mr Busby.

Kent produced a fine block to deny Upson before Kilgour was booked for a foul on Toney on the counter-attack. Pym was well placed to keep out a low strike from Upson on 54 minutes before Clarke’s curler was similarly dealt with by the Posh shot-stopper.

Jaakkola produced a stunning save to keep out Eisa on 59 minutes as the striker took a fine first touch and unleashed a fierce effort which was heading for the corner before the keeper’s intervention.

Jonson Clarke-Harris came on for Smith on 65 minutes and with his first kick, drilled a powerful free-kick into the wall. Toney planted a header wide moments later following a hanging Reed corner kick. Clarke-Harris sent another long-range free-kick wide on 70 minutes.

Maddison fired a 25-yard shot inches past the post three minutes later after an intelligent pass from midfielder Woodyard. Craig was cautioned for a foul on the rapid Jones as the game moved into the final 10 minutes.

Ward curled a free-kick miles over the top on 82 minutes. A Ward cross was stabbed goalwards by Jones moments later, but keeper Jaakkola kept it out at his near post. Reed then lashed a shot over after intelligent play from Jones.

Pym produced a fine stop with his body to keep out Clarke on the 90 minute mark as Posh transpired to gift possession to the home side.