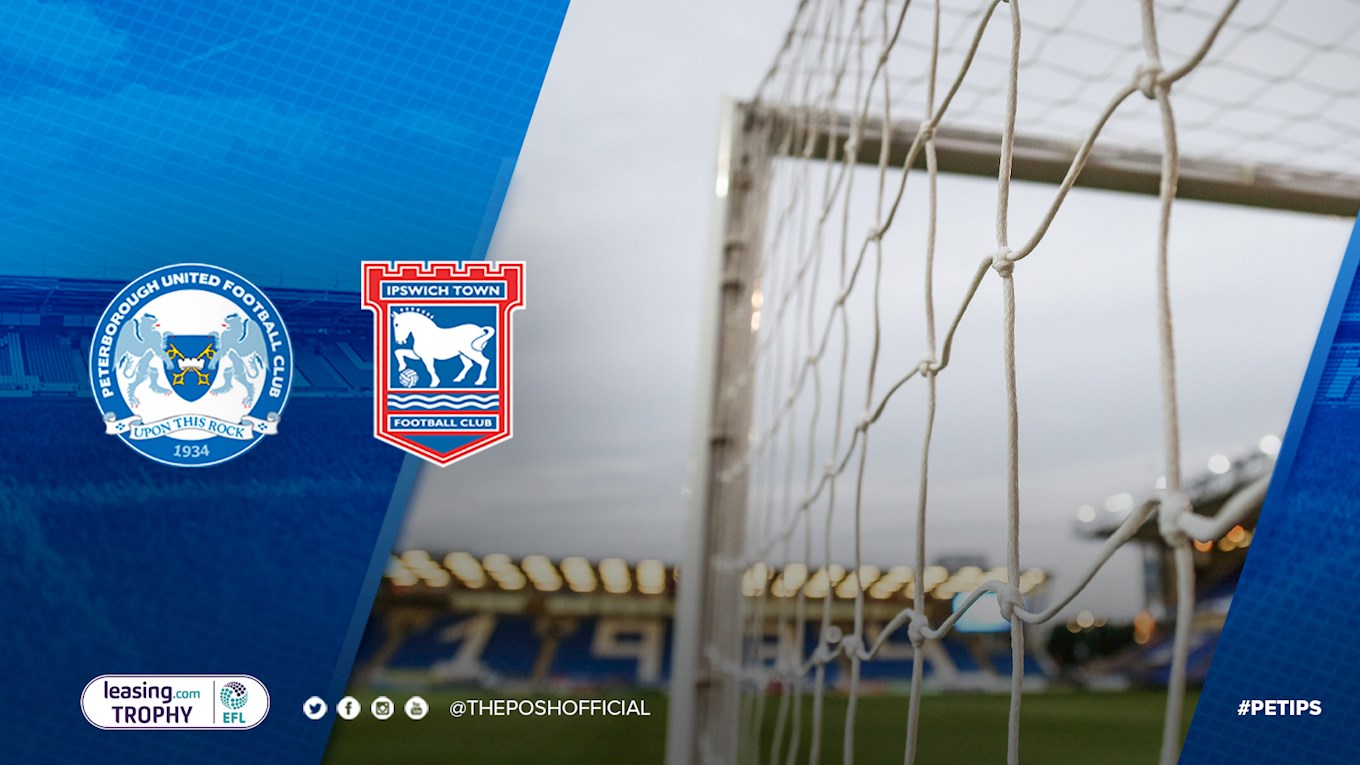 Ipswich Town are the opponents this evening as the Leasing.com Trophy reaches the knockout stages.

Peterborough United entertain Ipswich Town this evening (Wednesday) in the knockout stages of the Leasing.com Trophy (7.30pm) with the Tractor Boys visiting the Weston Homes Stadium for the second time this season.

Ipswich and Posh shared the points in the league fixture with the visitors snatching a 2-2 draw thanks to a last-gasp Luke Chambers header from a corner kick. Posh breezed through the group stages of the competition with wins over Northampton Town, Cambridge United and Arsenal under 21s.

Ipswich finished second in their group, losing the final game against Colchester United, a game where they took over 2,500 supporters. Ipswich, like Posh, have enjoyed a good start to the season and are currently chasing down Wycombe Wanderers at the top of the division.

Posh are without the services of Josh Knight, George Boyd and Frazer Blake-Tracy due to injury. The latter’s ankle injury sustained in the 3-0 win over Dover Athletic in the second round of the Emirates FA Cup will be assessed when the swelling subsides.

Manager Darren Ferguson has hinted that he will mix his team up like he has done in the group games with Siriki Dembele, Ricky-Jade Jones and Harrison Burrows all set to be involved. Dembele has recovered from a knee injury to feature.

Ipswich have given their squad players an opportunity in this competition so far with big hitters James Norwood and Kayden Jackson not featuring. Will Keane is expected to lead the line with former Posh youth player Jordan Roberts set to start. Another ex-Posh player Gwion Edwards is unlikely to travel.

“It is a competition that we want to progress in. Our home form has been good this season and we want that to continue. I will make changes. Siriki Dembele is fit to start, which is good news. Ipswich will make changes, I don’t know that for sure, but they have certainly utilised their squad in the group games, but it will be a difficult game because they are a good side,” manager Darren Ferguson said.

"You're going to get ups and downs with it so we try and help them out with it. We try to give them a winning habit,” Ipswich boss Paul Lambert said.

Tickets are on sale at www.theposhtickets.com, via the Ticketmaster hotline 0844 847 1934 (calls cost 7ppm plus your network access fee) and in person at the Weston Homes Stadium Ticket Office, which is open from 9am through to kick-off.

Season ticket holders' seats will be reserved until 5pm on Tuesday 3rd December. The Motorpoint Stand will be closed for this fixture. Ipswich have sold over 400 tickets for the tie.

If the tie is level after 90 minutes, it will go straight to penalty kicks.