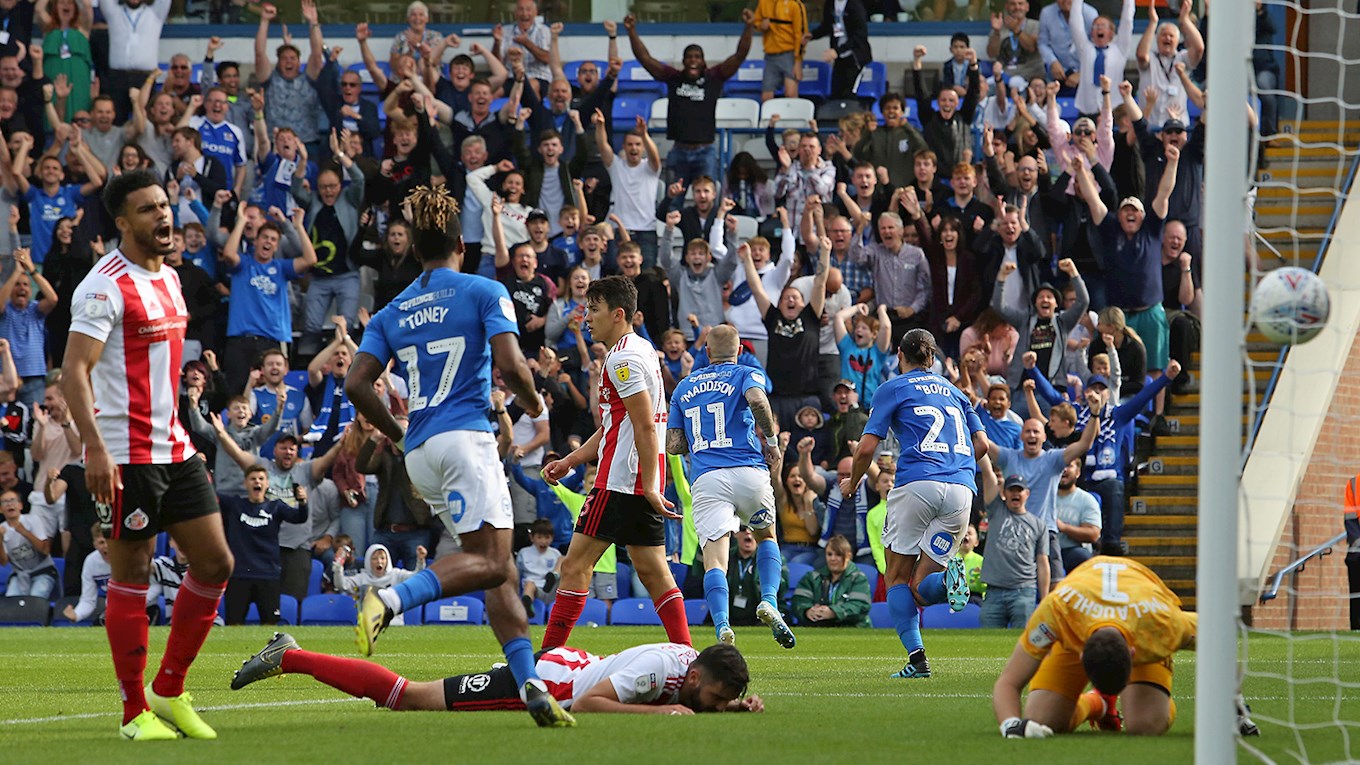 Match report for Peterborough United vs Sunderland on 31 Aug 19

Marcus Maddison bagged a brace in a comfortable 3-0 win over Sunderland in League One action.

Marcus Maddison took his personal stats to six assists and three goals in the month of August and then declared afterwards that he is not yet at 100% fitness as Peterborough United romped to a 3-0 victory over Sunderland in front of over 10,000 supporters at the Weston Homes Stadium.

Maddison netted twice, including a superb free-kick while Josh Knight scored his first goal in a Posh shirt as Darren Ferguson’s men overcame a Sunderland side that ended proceedings with just nine men following a rather bizarre lapse in discipline.

Aidan McGeady sent an early effort over the bar for the visitors after Jack Ross’s side won the first corner kick of the contest. Mo Eisa fired over at the other end after a low cross from Josh Knight was bobbled into his path just inside the box.

Eisa was then denied by goalkeeper Jon McLaughlin after a snap-shot from just outside of the box after linking well with Boyd. Toney powered a header over the top on seven minutes after a good run and cross from Butler down the left hand side.

Posh opened the scoring on 35 minutes and it was a superb strike from Marcus MADDISON against his boyhood club, firing home an unstoppable free-kick from long-range after Mo Eisa had been felled by Ozturk.

Toney was cautioned for a foul on 50 minutes but Posh cleared the set-piece and at some pace too, some excellent counter attack football was finished off by a low drive from Josh KNIGHT past the keeper and into the bottom corner for his first goal in Posh colours.

Wyke was yellow carded for a foul on Boyd on 57 minutes after the midfielder had done superbly well to get back and help his side defend. Wyke hooked over from a corner kick on the hour mark before both sides made changes.

Posh made it 3-0 on 62 minutes and it was a move started and finished by MADDISON, his initial pass picked out Boyd and his cut-back was swept home by the Posh winger for his second goal of the day. Sunderland were reduced to 10-men on 70 minutes as Luke O’Nien was dismissed for whacking Toney. Straight red card for the defender, thoroughly deserved.

Sunderland were down to nine-men on 76 minutes as Wyke was shown a second yellow card for a needless foul on Butler. Toney was inches away from making it four but his header went wide following a teasing centre from Butler.

Leadbitter was cautioned for yet another foul, this time on Boyd before Dembele saw a shot blocked as we entered six minutes added time.