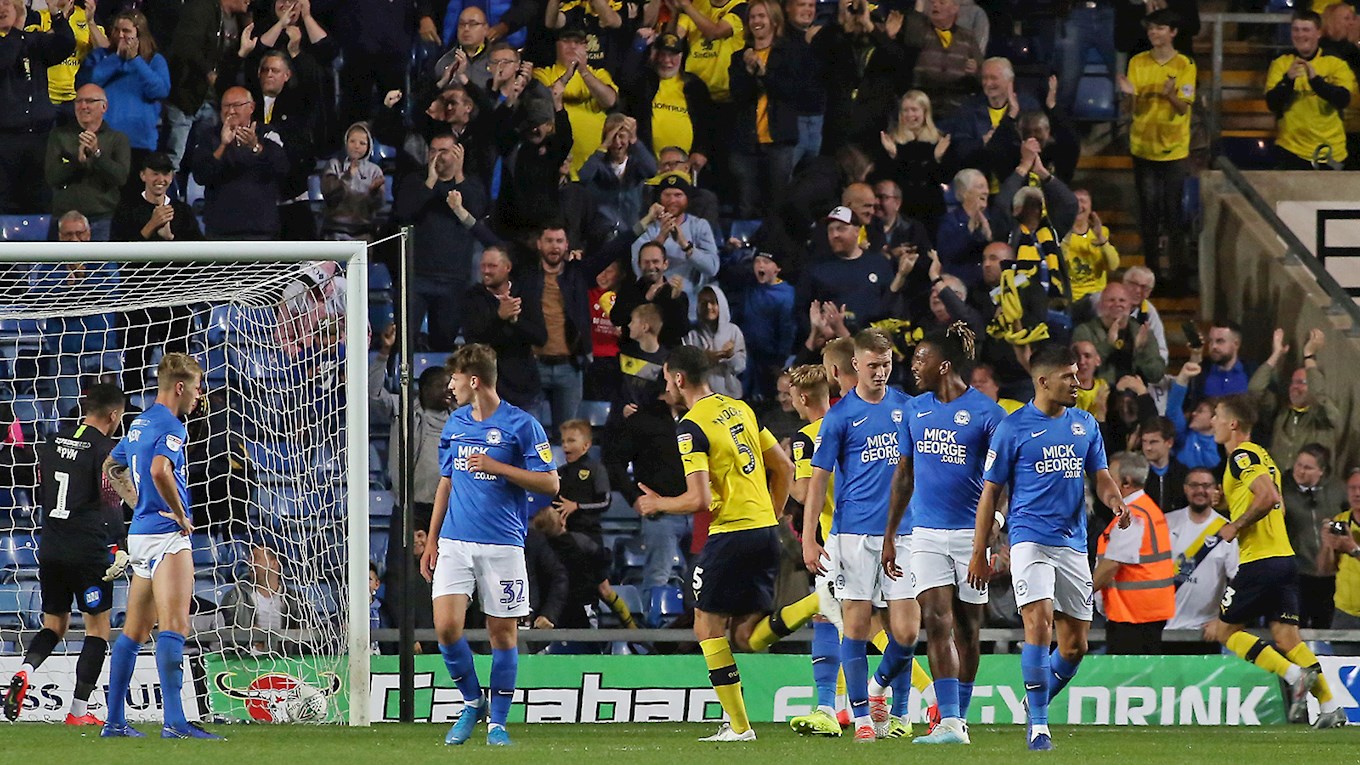 Darren Ferguson’s men beaten in the first round of the Carabao Cup at the Kassam Stadium.

Peterborough United were much improved, but suffered the same score-line as Saturday as Oxford United moved into the second round of the Carabao Cup with a 1-0 victory at the Kassam Stadium thanks to a late Cameron Brannagan strike.

Posh had the ball in the back of the net on nine minutes as Ivan Toney stooped to head home a Serhat Tasdemir delivery, but the offside flag was raised by the assistant referee on the near side and the goal was chalked off.

Tasdemir and Toney linked again moments later, but this time, the striker’s good touch and volley cleared the crossbar from the edge of the box. Posh put together a fine move on the quarter hour mark and it was Boyd at the heart of it, his intelligent cut-back was met first time by Toney, but his fierce drive was clawed away from danger by Eastwood.

The home side were forced into a change on 20 minutes as youngster Napa was stretchered off to be replaced by on-loan Liverpool front man Ben Woodburn. Kent was cautioned by referee Mr Yates on 24 minutes, a strange decision at first glance as he appeared to get all of the ball.

Eisa cracked a shot from distance over the bar on the half hour mark as Posh tried to find the breakthrough in this cup contest. Eisa had another go seconds later, but his low shot was straight into the arms of goalkeeper Eastwood.

Long tested Pym, his first save of the evening, on 42 minutes and it was very routine for the former Exeter shot-stopper. Tasdemir curled wide from 25-yards as the game moved into six minutes of first half injury time.

Boyd fired wide moments after the re-start with a well struck effort from long-range as Posh tried to assert themselves early in the second half. Pym made a sharp save with his legs to keep out a Woodburn effort on 49 minutes after the on-loan striker eased Beevers under the ball following a long clearance.

Long was cautioned for a foul on Knight on 54 minutes as referee Mr Yates went into his pocket for the second time in the tie. Posh came as close to anyone to a breakthrough on the hour mark as good work from Tasdemir saw him get into the box and his left-foot cross was sliced by Dickie onto the far post and away to safety.

Eisa was then a whisker away as his shot from 25-yards flew just over the crossbar after good work in the build-up. Woodburn fired wide from long-range at the other end with Pym waving it by the post.

Posh made a double change on 75 minutes with Joe Ward and Harrison Burrows the men introduced. Posh were dealt a huge blow seconds later as Tasdemir was carried off after appearing to pull a muscle as he chased the ball and Posh were forced into playing the remaining 12 minutes with 10 men.

Posh created a chance following a quickly-taken free-kick on 84 minutes as the ball was worked to substitute Burrows, but his left-foot shot was parried by Eastwood. Mason was cautioned for a foul right on the edge of the box on 86 minutes and from the resulting free-kick, BRANNAGAN fired low into the bottom corner.

Five minutes of additional time was indicated by the fourth official. In that stoppage time, Eisa saw a close-range header clawed away by Eastwood before the same player headed wide after a looping cross.