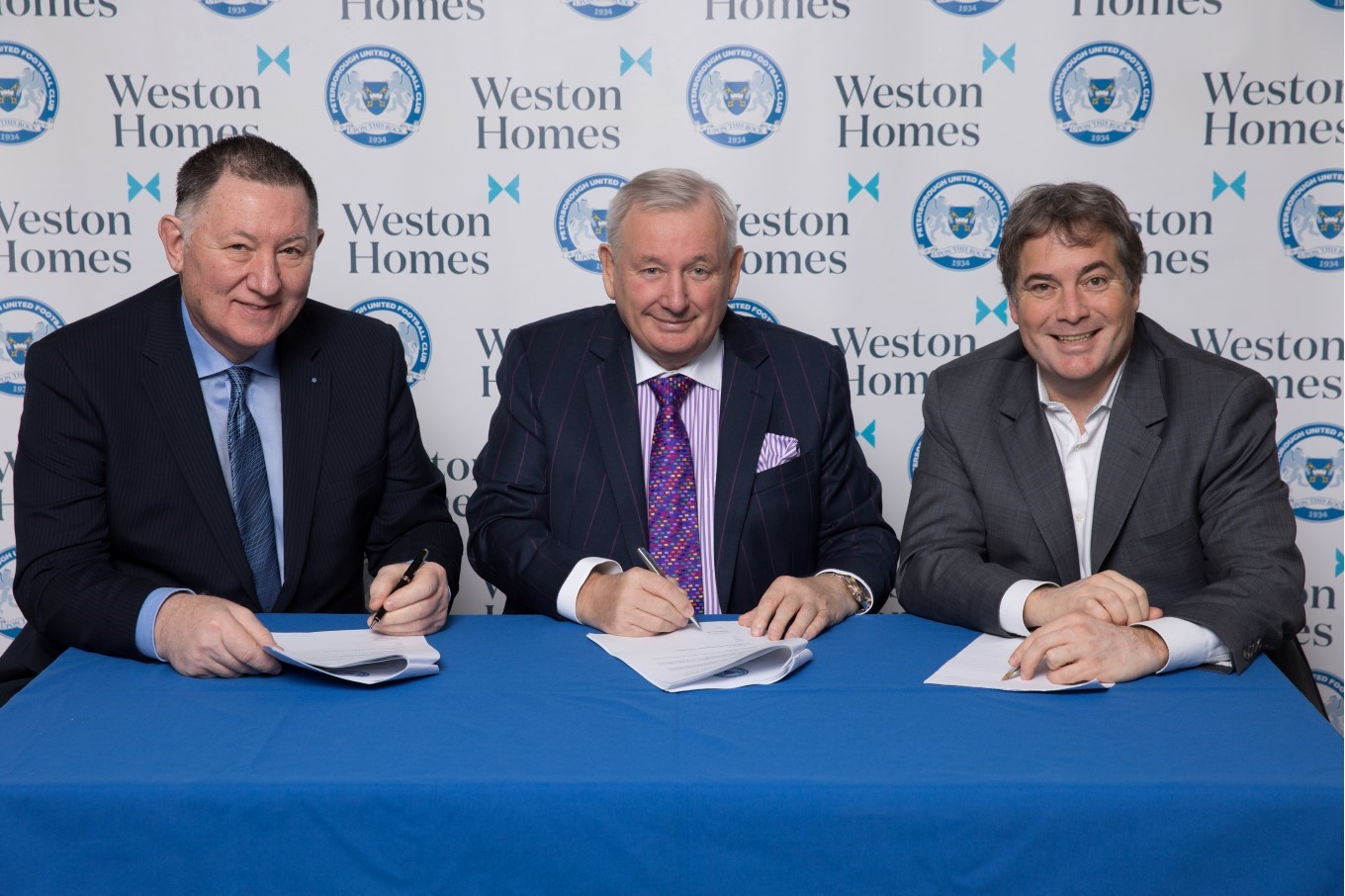 Weston Homes has signed a £2 million, 10 year, sponsorship deal with Peterborough United and acquired the name and promotion rights for Peterborough’s London Road Football Ground which will now be known and branded as the Weston Homes Stadium from Saturday 1st June 2019.

This is only the second change of stadium name since the club was formed in 1934. It was originally known as the London Road Stadium, the name changing in 2014 to the ABAX Stadium, when the Norwegian-owned company signed a £500,000 five-year deal to rename the grounds.

Back in May 2018 Peterborough United and Weston Homes signed a five-year deal for the housebuilder to become the title sponsors of the club’s London Road Stand, and this new deal reflects the good working relationship the club and Weston Homes have established.

Football has been played on the site of the newly named Weston Homes Stadium since the 1890s; the current ground was opened in 1934 and the modern stadium has a capacity for 15,314 people. Peterborough United, with its famous nickname “The Posh”, is Peterborough’s much loved League One professional football club.

With head offices in Central London and Stansted, Weston Homes is a leading volume housebuilder, currently developing a £3 billion portfolio of 7,500 homes across London and the South East.

Weston Homes is a major investor and established developer in Peterborough, and has undertaken a series of new homes schemes in the local area including the current £70 million Fletton Quays waterside residential development, situated on the banks of the River Nene in Peterborough which provides 358 one, two and three bedroom apartments.

Peterborough United Commercial Manager Alex Harris said: “This is the biggest sponsorship deal in the club’s history, delivering a great deal for the club, the city and our supporters. Weston Homes is a long established housebuilder in Peterborough and a major investor in the city so we are delighted that the grounds will gain the Weston brand name. We have established a good working relationship with Weston Homes and this new 10-year collaboration will provide a significant income stream for the club, and outstanding brand promotion opportunities for our new sponsor.”

Weston Homes Chief Executive Bob Weston said: “We are proud to be elevating our partnership with Peterborough United to a high level and the stadium taking our brand name. Over the last 12 months we have worked with the club and been impressed by the way the club is run, the loyalty of the fans and the deep links between the club and the City. We are delighted that the club has allowed the grounds to be named the Weston Homes Stadium and chosen us as their principal brand partner.”

ABAX will remain as a partner and Kevin Bull, Country Director said “We’ve had a great five years being the club’s naming rights partner. We’re happy that another company has decided to take on the opportunity. ABAX will still remain a partner of Posh and have some exciting new avenues to take with the club in the coming years”.