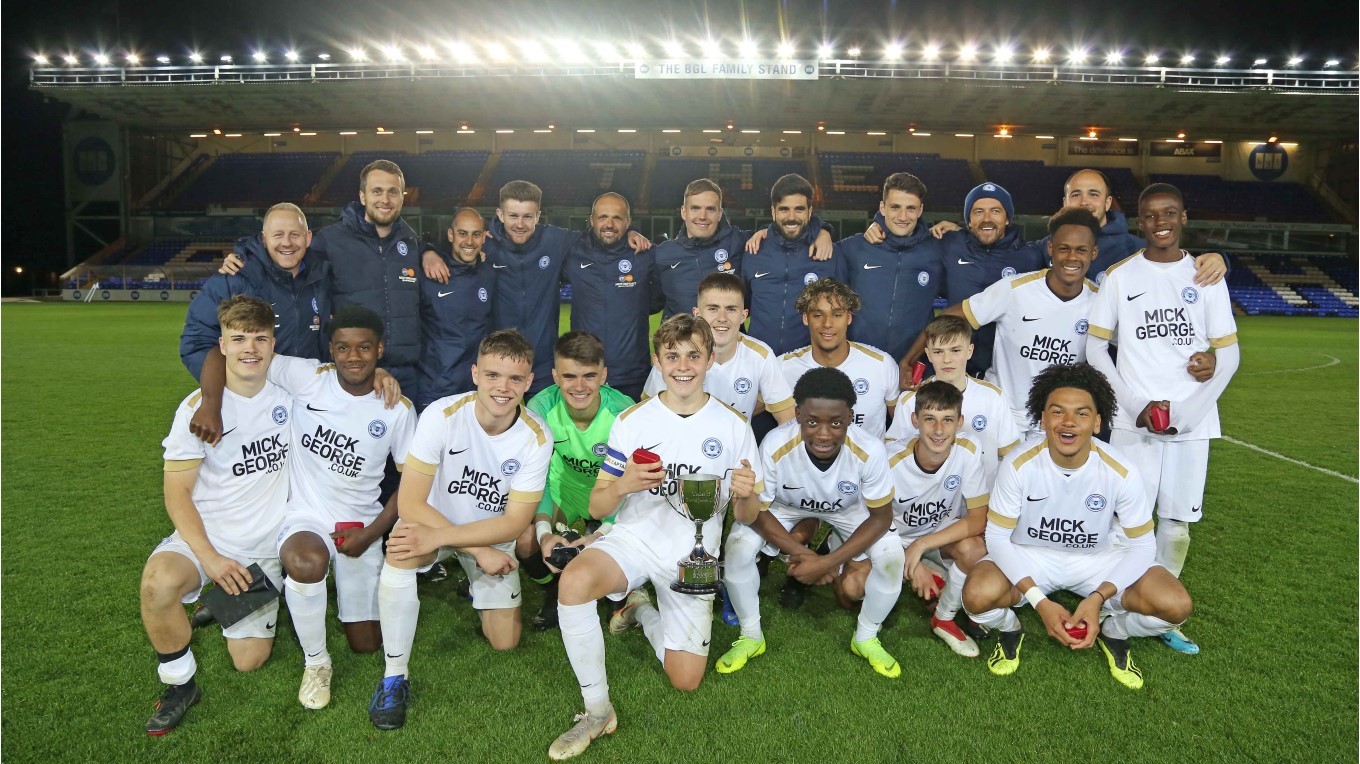 The Peterborough United under 18s, made up of six under 16s and five under 17s lifted the David Joyce Cup after a 3-0 victory over Peterborough Sports under 18s in front of just under 500 supporters at the ABAX Stadium.

PSL battled gamely throughout and created a host of chances, but a combination of wasteful finishing and good goalkeeping from Josh Allen preserved the Posh clean-sheet with Archie Jones, Bradley Rolt and Flynn Clarke scoring the goals to secure the trophy.

Posh didn’t take long to open the scoring in this cup final as the pace of Bradley Rolt saw him win a spot-kick and midfielder and skipper Archie JONES coolly converted the penalty, sending the keeper the wrong way from the 12-yards.

Flynn Clarke struck the crossbar with a rasping drive after a quickly taken free-kick by Roudette-Gregory pierced the PSL back-line. On the stroke of half-time, Clarke wasted a golden chance to double the lead, skiing over the bar after the ball ran kindly for him in the box.

The visitors made a third change at the break as the second half got underway under the floodlights at the ABAX. Ferguson glanced a header from a free-kick wide of the target on 50 minutes as PSL came close to a leveller and the same player came close moments later, this time his effort was deflected for a corner kick.

Ricky-Jade Jones showed good pace to get in behind in a wide area just after the hour mark but his finish found the side-netting of the near post. Posh doubled the lead on 62 minutes as a huge clearance from goalkeeper Allen was misjudged by the PSL defence and ROLT was able to round the advancing keeper and slot into an empty net.

Pratt was denied by Allen after a wonderful piece of skill from Nkobi to beat a man and thread a good ball into the striker’s path. Seery saw a late effort well gathered by Allen as PSL pushed for a deserved consolation goal. Allen was called upon again moments later to keep out a downward header from Pratt.

The same player then headed wide when completely unmarked in the penalty area, however Posh clinched a third goal in stoppage time as Flynn CLARKE rounded off a superb move with an excellent finish from 12-yards.