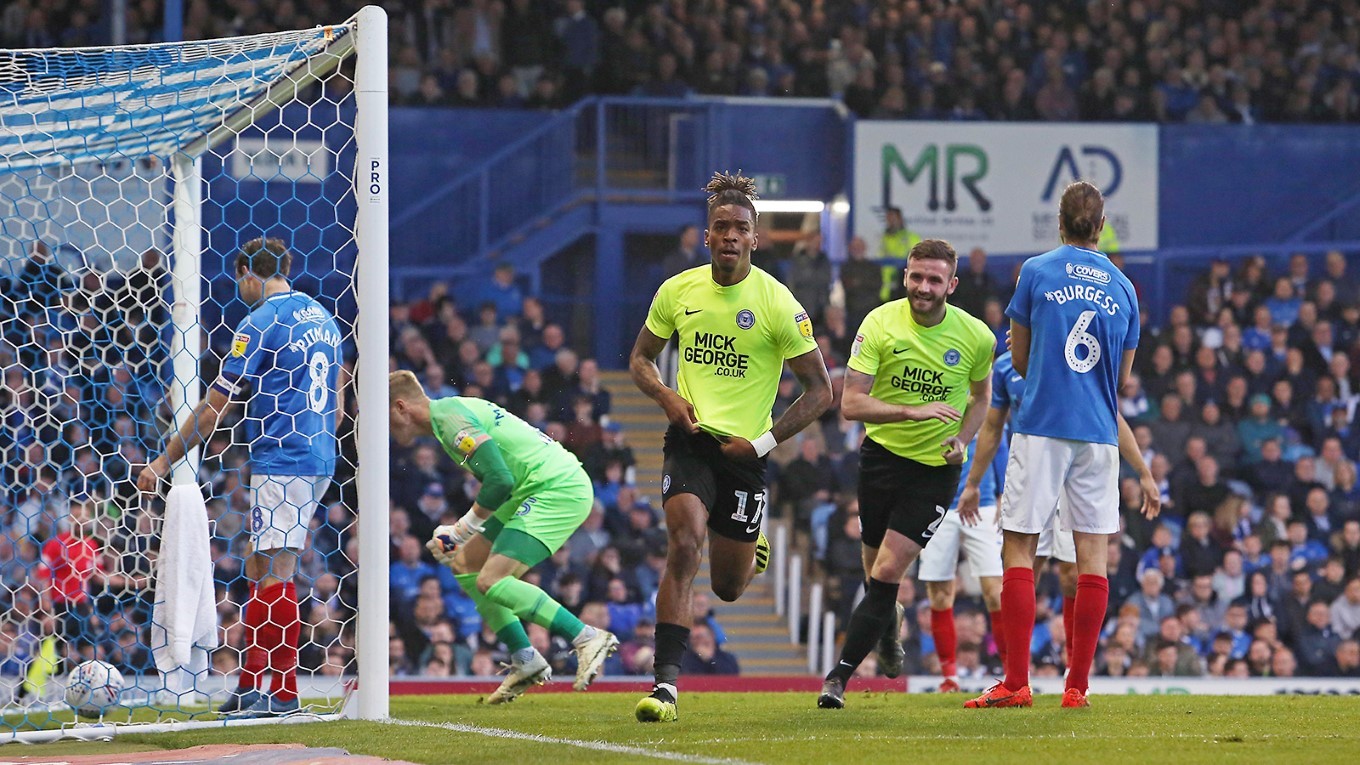 Match report for Portsmouth vs Peterborough United on 30 Apr 19

Ivan Toney scored twice and took his tally to 21 for the campaign following a 3-2 victory at Portsmouth.

Peterborough United took the fight for the play-offs to the final day with a stunning 3-2 victory over automatic promotion contenders Portsmouth at Fratton Park following an absorbing Sky Bet League One contest in front of just under 19,000 fans.

The home side, backed by a passionate and loud crowd, made a great start to the contest, creating a number of half chances in the opening 10 minutes with Ronan Curtis and Jamal Lowe a huge threat. However, on the counter attack, it was Posh who opened the scoring, Josh Knight picking out Marcus Maddison down the right, he beat his full-back and picked out TOMLIN who made no mistake from 10-yards.

Jason Naismith showed adventure from right-back on 16 minutes to get into a dangerous position, but his cut back was behind Ivan Toney who could only stab goalwards into the keeper’s grasp. On 28 minutes, Posh doubled the lead as a driven corner kick from Maddison was powered home by TONEY who timed his leap to perfection for his 20th goal of the campaign.

Naylor fired over from distance on 33 minutes as Portsmouth tried to get themselves back into the contest in terms of the score-line. Tomlin and Ward were both cautioned for fouls, the latter on Thompson.

The home side pulled a goal back on 39 minutes as a miscued effort from Pitman fell kindly for CLOSE and his shot into the ground found the back of the net. Chapman denied Curtis twice in first half stoppage time, the second time with his legs after a lightening break from one end to the other from the hosts.

Portsmouth made a change at the interval with Oli Hawkins replacing Vaughan in attack. Ward saw a left-footed effort go wide of the post on 53 minutes after a good counter attack from Posh. Hawkins headed over from a deep Pompey corner kick, moments later as the hosts tried to use the aerial threat of the substitute.

Portsmouth drew themselves level from a free-kick, Posh struggled to clear, the ball got stuck under legs and there was BURGESS to fire low into the back of the net. Maddison and Brown were both cautioned as a prelude to that free-kick following a bit of a melee.

Close was a whisker away from giving Portsmouth the lead with a superb volley from distance as the hosts came close to taking the lead for the first time in the game. Maddison saw a free-kick spilled by MacGillivray on 66 minutes but Pompey were there to hack clear.

Solomon-Otobor fired wide of the near post from 20-yards on 71 minutes after cutting inside Maddison. Posh were a whisker away from re-taking the lead on 72 minutes as an in-swinging free-kick from Maddison was met by a towering Tafazolli header but his effort crashed against the crossbar.

Portsmouth had the ball in the back of the net moments later as they countered at pace, Pitman clean through on goal, he squared for Solomon Otobor who tapped in but from an offside position. Less than two minutes later and Posh were in front, Maddison with the pass, TONEY chested it down into the path of Dembele, he lost it but suddenly the Posh front man was there and he finished superbly. Lowe was cautioned on 86 minutes for a foul on Tomlin. Five minutes of added time was signified and Posh defended manfully, seeing out the five minutes.