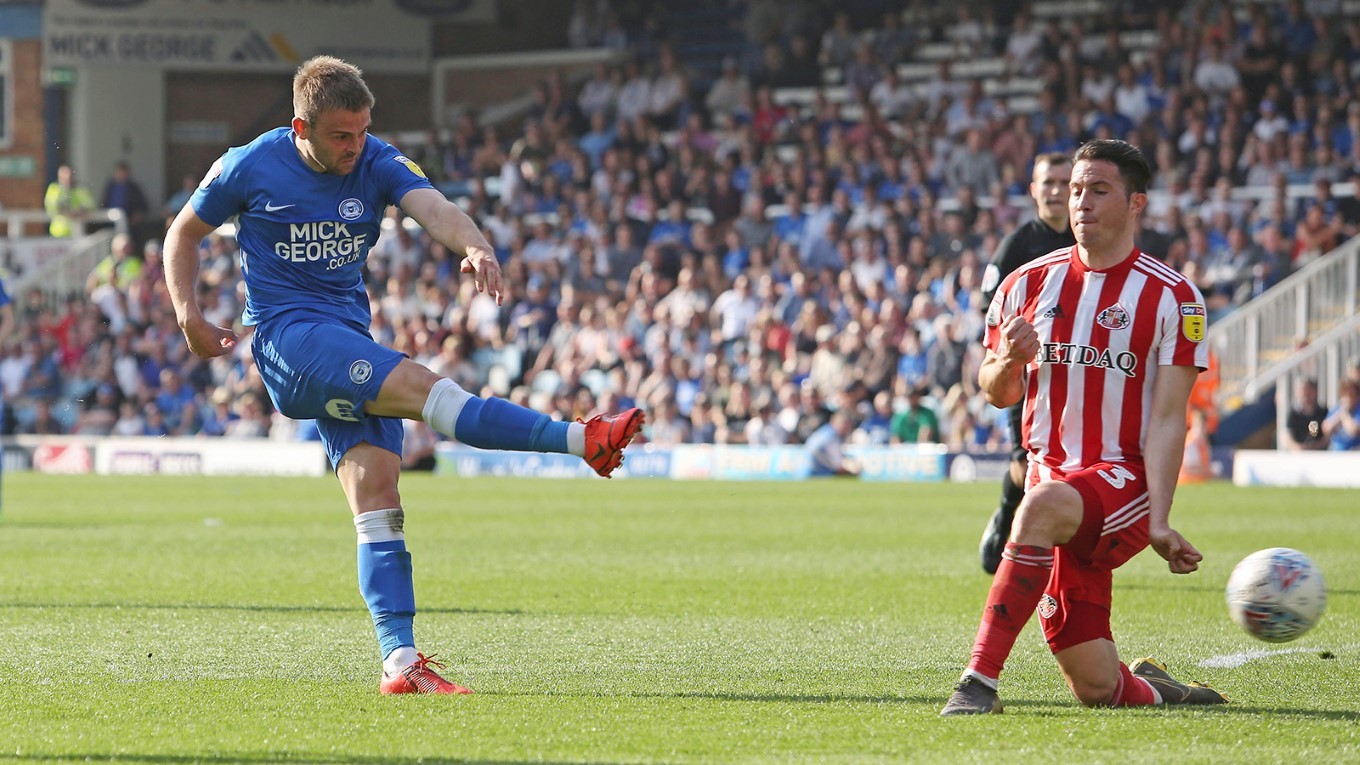 Match report for Peterborough United vs Sunderland on 22 Apr 19

Darren Ferguson was left frustrated by a number of refereeing decisions, but proud of his players after 1-1 draw with Sunderland.

Matty Godden earned Peterborough United a deserved point in stoppage time as Darren Ferguson’s men drew 1-1 with automatic promotion chasing Sunderland at the ABAX Stadium in front of the biggest crowd of the campaign of over 11,000.

Bryan Oviedo was cautioned inside the opening two minutes for a crunching foul on Marcus Maddison on the near touchline as Posh won an early free-kick. Maddison then saw a low effort gathered by Jon McLaughlin after good work from Cooper and Dembele in the build-up.

Lewis Morgan scuffed a left-foot shot wide on 10 minutes after the visitors worked a corner kick routine superbly to catch Posh out. Cooper saw a header caught by McLaughlin on 13 minutes after patient play down the left by Dembele.

Chapman was called upon to deny Max Power’s low drive on 20 minutes as the midfielder found a bit of space in the centre of the park. Maddison sent a powerful shot wide of the target on the half hour mark after excellent play from Posh to win the ball and then advance from midfield.

Lafferty was cautioned by referee Mr Coggins for a foul a minute later so both left backs on either side of the pitch were in the notebook. Sunderland carved out the clearest opportunity of the game on 37 minutes as McGeady and Cattermole created a chance for Wyke, but he sliced wide of the near post.

Ozturk bundled a header wide in first half stoppage time while Dembele fired over after tricking his way past two defenders. On the stroke of half-time, goalkeeper Chapman produced two fine saves, first to keep out Wyke from point blank range and then to beat away a curler from McGeady.

Maddison was cautioned for simulation on 47 minutes after the referee consulted with his assistant referee after initially giving Posh a free-kick, penalising the already cautioned Oviedo. Posh made a change on 63 minutes with Joe Ward replacing Dembele.

Ivan Toney replaced Reed on 70 minutes in a bold second change by Darren Ferguson. O’Nein was cautioned for a disgraceful professional foul on Toney on 76 minutes, the defender very lucky to stay on the pitch giving the cynical nature of the infringement. Maddison’s resulting free-kick was well gathered by McLaughlin.

Sunderland grabbed the winner in the 86th minute as Max POWER was allowed to drive from midfield and find the bottom corner from 25-yards. A minute into stoppage time, Posh drew themselves level as Toney laid the ball into the path of GODDEN and he superbly fired across the keeper and into the bottom corner.

Maddison saw a shot tipped around the post at the near stick by McLaughlin three minutes later. Godden then sent a volley over the bar deep into stoppage time after a glorious crossfield pass from Ward as promotion chasing Sunderland were left clinging on.