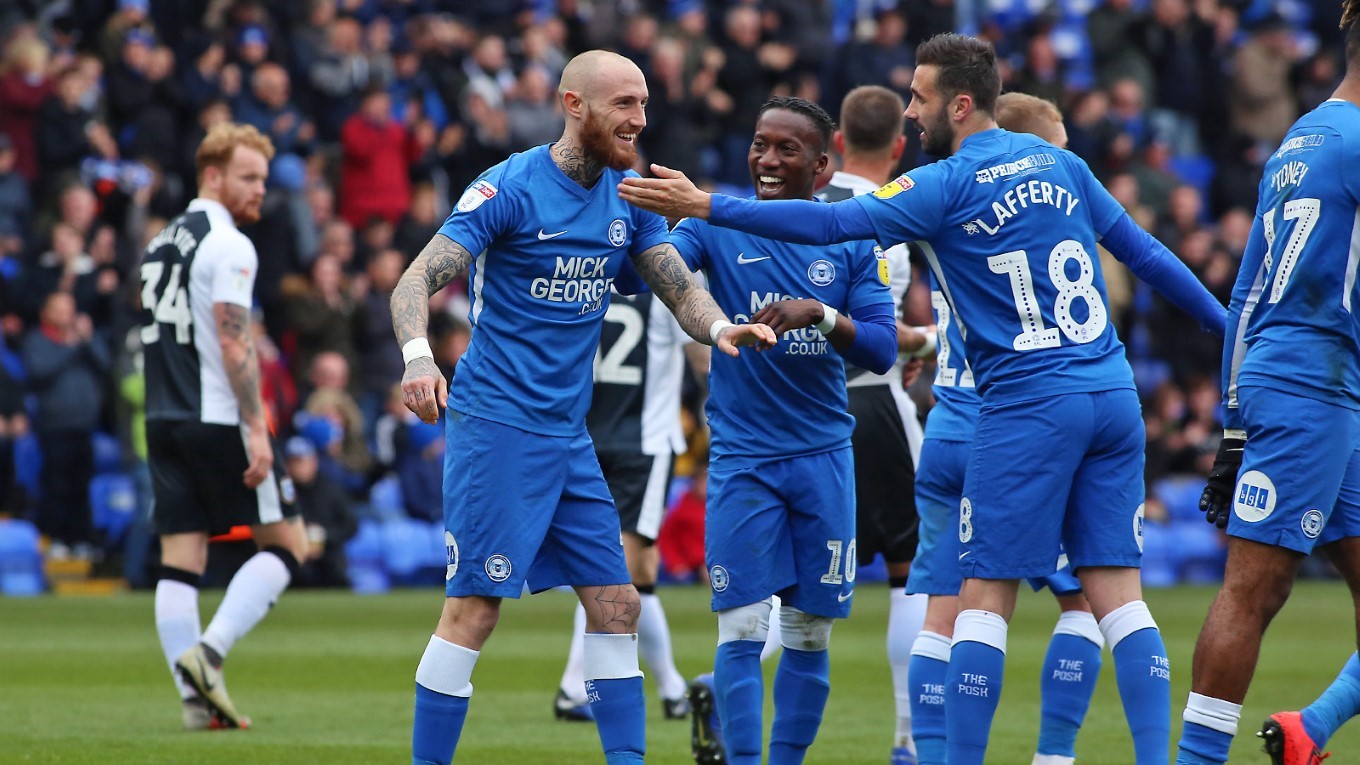 Match report for Peterborough United vs Gillingham on 06 Apr 19

Posh recorded a second successive 2-0 victory with a comfortable home success over Gillingham.

Peterborough United made it back to back home league wins for the first time since August as two goals in the second half from Marcus Maddison and Matt Godden secured a 2-0 victory over Gillingham in front of over 8,000 supporters at the ABAX Stadium.

Tom Eaves tested goalkeeper Aaron Chapman with a snap-shot on nine minutes as Gillingham made a bright start to the contest at the ABAX Stadium. At the other end, Ivan Toney was denied by the legs of the giant Gills shot-stopper Tomas Holy after a raking crossfield pass from Jason Naismith.

Dembele saw a left-footed effort saved after cutting inside in the area on 19 minutes before the same player escaped a caution for a foul on the near side after a good run from Burke. Gillingham were forced into a change on 23 minutes with Regan Charles-Cook replacing the injured Mark Byrne.

O’Neill was cautioned for a foul on Toney after a wonderful spin from the striker following a swift Posh counter-attack. Tomlin saw a shot blocked on 37 minutes after good hold-up play and intelligence with the pass by Toney.

Chapman produced a fine save on 42 minutes to keep out a downward header from Eaves as Gillingham came close to the breakthrough although Posh would have been fuming had it gone in as Toney was clearly pushed in the build-up.

Maddison was a whisker away from finding the breakthrough on 49 minutes after good work from Dembele and Reed, the winger pulling his right-footed shot wide of the target. Maddison had another effort moments later, this time with his favoured left-foot, but it went just past the same post.

The deadlock was broken on 57 minutes as a tricky run from Dembele was brought to an end by a clumsy foul in the box and Marcus MADDISON coolly converted from the spot, sending keeper Holy the wrong way.

Toney was cautioned by referee Mr Jones for preventing the taking of a Gillingham free-kick just after the hour mark. From the resulting set-piece, Eaves headed over at the back post. Posh made their first change moments later with Matt Godden replacing Toney in attack.

O’Neill curled a free-kick over the top on 66 minutes after a foul by Tafazolli. Maddison was rightly cautioned for a fairly blatant body check on Charles-Cook two minutes later. Eaves and Maddison both had wild efforts midway through the second half at either end.

George Cooper replaced Tomlin on 75 minutes before Charles-Cook fired wide of the post with his left-foot. Josh Knight replaced Reed on 82 minutes as Darren Ferguson tried to see out the remaining minutes. Posh doubled the lead on 86 minutes and it was superb from GODDEN, he started the move with a fine header into the path of Maddison and then when the winger picked him out, he coolly slotted the ball past the keeper and into the back of the net.

Six minutes of added time was indicated by the fourth official. Holy kept out Maddison deep into stoppage time after a glorious cross-field pass from substitute Cooper.