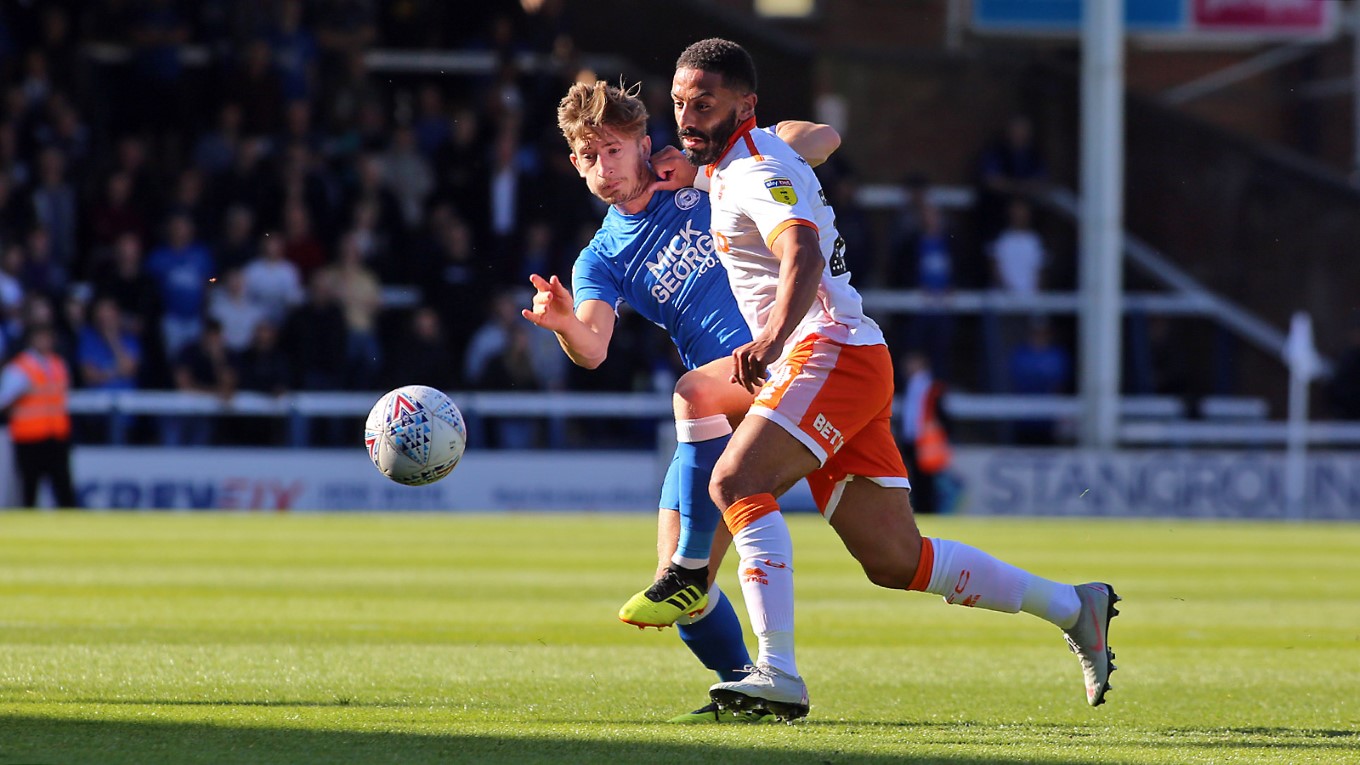 Match report for Peterborough United vs Blackpool on 29 Sep 18

Posh pegged back for a 2-2 draw following end to end contest at the ABAX Stadium.

Peterborough United were twice pegged back by Blackpool at the ABAX Stadium as Steve Evans’ men were forced to settle for a 2-2 draw following an enthralling Sky Bet League One fixture with Blackpool goalkeeper Mark Howard producing a superb late save to deny Jason Naismith.

The visitors created the best opening inside the first 10 minutes with Marc Bola getting into the penalty box, but his shot was weak and Aaron Chapman made a routine stop. Walker saw a shot from 25-yards deflect wide for a corner kick on 13 minutes.

Thompson fired well wide from long-range as the Tangerines counter-attacked at pace moments later. Marcus Maddison curled a free-kick inches wide of the target after he had been upended 25-yards from goal following a mazy dribble.

Godden hooked a volley over the bar from an in-swinging Maddison centre as Posh continued to probe for the breakthrough. Jay Spearing was cautioned for a foul on Woodyard on 26 minutes right in front of the dugout.

The deadlock was broken a minute later as a floated free-kick from Dembele was powered into the bottom corner by Rhys BENNETT for his first goal for the club. That goal was the first that Blackpool had conceded away from home in the league so far this season.

Maddison was cautioned by referee Carl Boyeson for a foul in the centre circle on the half hour mark on Tilt. Blackpool struck the crossbar through Heneghan on 41 minutes from a corner kick as the visitors came close to levelling the scores, the follow up header from Bola went over the bar.

Chapman did well to get behind a low Thompson effort five minutes after the re-start as Blackpool found some space in midfield. Walker was cautioned moments later for a foul on Turton. Heneghan followed him into the book with a high boot on Toney.

The visitors got the goal they were seeking on 58 minutes as GNANDUILLET tapped home from close range after a swift counter attack but video footage afterwards suggested the goal should have been chalked off for for offside. Toney cracked the bar less than 60 seconds later with a powerful drive before Maddison saw a curling effort held by Howard.

Posh got themselves back in front on 63 minutes and what a goal it was. Substitute Mark O’HARA winning the ball in midfield, driving forward before unleashing a fierce drive into the top corner from 25-yards.

However, the lead didn’t last long, the visitors scoring a fine goal of their own, neat interplay before a fine effort from DELFOUNSO into the corner from the edge of the box. Thompson missed a sitter on 71 minutes after another counter attack from the Tangerines from one end of the pitch to the other.

Bennett was cautioned for a foul in the build-up to another Blackpool attack. Six minutes of added time was indicated by the fourth official as both sides sensed a winner was in the offing. Naismith was denied a superb winner deep into stoppage time as goalkeeper Howard produced a fine fingertip stop.