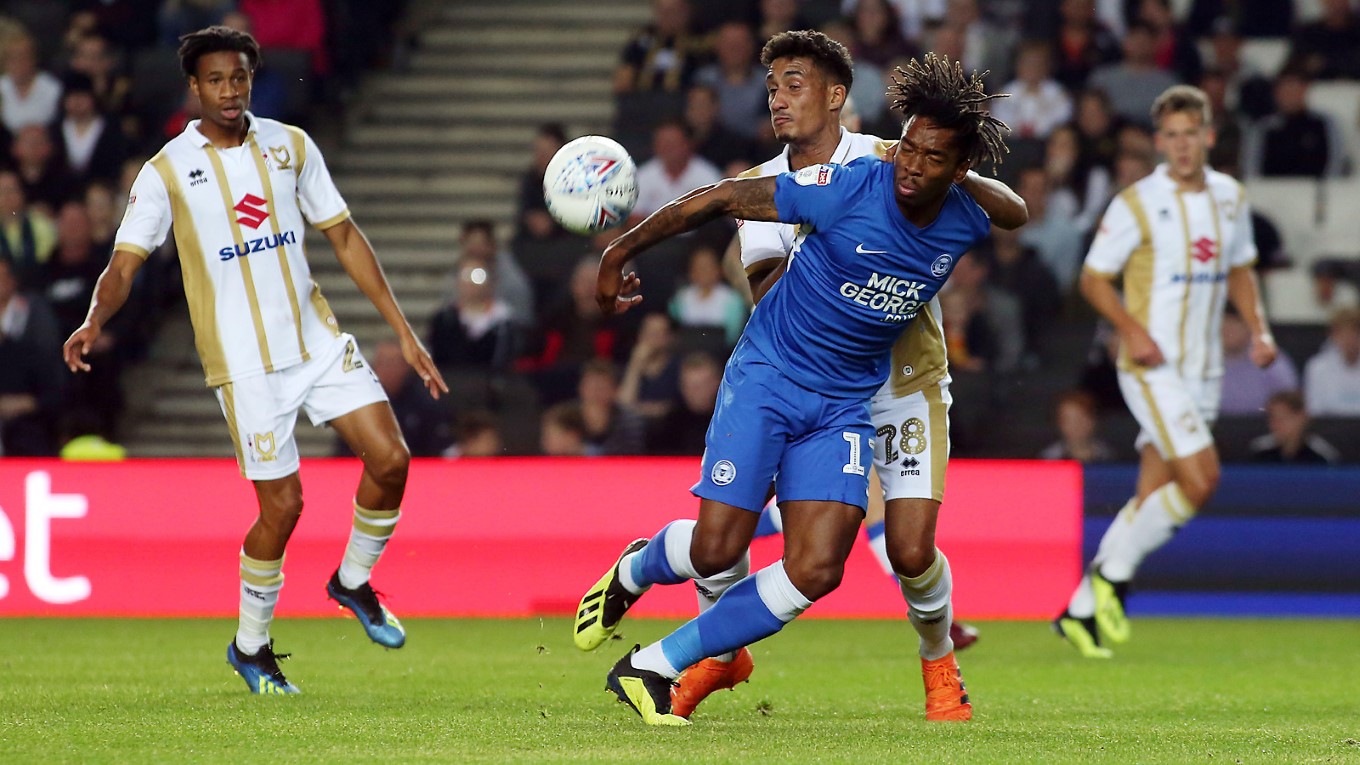 Posh pick up a point in the Checkatrade Trophy after six goal thriller.

Peterborough United produced a superb second half comeback to earn a point from the Checkatrade Trophy tie at Milton Keynes Dons, but lost out on the bonus point in the penalty shoot-out as Alex Woodyard saw his spot-kick saved by Stuart Moore.

Posh trailed 3-0 at the break but goals from George Cooper, Jamie Walker and Matt Godden earned a 3-3 draw following an absorbing contest in front of just under 2,500 at stadium: mk.

Marcus Maddison had a good opportunity inside the opening two minutes after a defensive slip but his fierce drive was tipped around the post by Moore. Louis Reed fired over on the volley from the resulting set-piece before Conor O’Malley was called upon to deny Brittain with his legs after making progress into the box.

The home side broke the deadlock on five minutes as a deep cross was powered past goalkeeper O’Malley by the returning ANEKE who leapt highest at the back post against Tyler Denton. Cooper tested Moore with a left-footed curling effort on seven minutes after cutting inside onto his favoured foot.

O’Malley denied Watson on 13 minutes before there was a slight injury break as Tafazolli received treatment for a facial wound. Posh put together the best move of the game on 18 minutes, Buckley-Ricketts and Lyon combining on the right, the latter with a teasing cross to Toney but his volley went over the bar.

Maddison picked out Toney moments later with a textbook delivery but the striker saw his effort saved by the body of Moore. Kasumu was cautioned for a foul on Cooke on 28 minutes, the Posh midfield man requiring treatment.

The Dons made it 2-0 on 31 minutes, a whipped Watson free-kick headed home at the near post by Rhys HEALEY. The injured Cooke was replaced by Alex Woodyard on 35 minutes, a blow for the midfielder who’s chance to impress was ended by a crude challenge.

Reed was a whisker away from reducing the arrears moments later with a crisp volley from the edge of the box, the ex-Sheffield United man seeing his well struck effort strike the bottom of the post before rebounding to safety.

Buckley-Ricketts fired over the bar with his left-foot on 41 minutes after good persistence from Cooper as Posh tried to get a goal back before the break. In injury time, the Dons made it 3-0 as ANEKE was given time and space to coolly slot the ball into the bottom corner with his left-foot from the edge of the area.

Posh made a change at the break with Jamie Walker replacing Buckley-Ricketts. Toney wasted a good chance to pull a goal back within two minutes of the second half following a superb Maddison delivery, heading wide from six-yards.

Posh appealed in vain for a spot-kick on 49 minutes as Cargill appeared to handle in the box but referee Mr Huxtable waved away the protests. Walker was denied at the second attempt by Moore on 52 minutes after a clever pass from Cooper picked him out in space.

Posh reduced the deficit on 54 minutes and it was a wonderful free-kick from George COOPER, his left-footed effort flighted over the wall and into the back of the net. Woodyard was cautioned for a supposed foul on 57 minutes by the referee.

Walker saw a shot blocked before Watson flicked an effort over the bar at the other end after a low centre. Maddison fired wide with his right-foot from distance as Posh continued to dominate this second half. Walker smacked the post with a rasping drive from 25-yards on 64 minutes as Posh continued to probe.

Aneke stabbed wide from close-range on 68 minutes after a nice one-two with Watson as the Dons nearly added a fourth on the break. Maddison curled an effort wide from 25-yards after Posh again failed to get a spot-kick as hands were up in the Dons defence. O’Malley produced a fine stop from a Watson free-kick as the game entered the final 10 minutes.

Godden fired wide of the near post following a deflected low Lyon centre as Posh continued to create and miss opportunities. Posh did set up a tense finale as substitute WALKER finished off a flowing move and a perfect first-time assist from Denton to fire past Moore and into the bottom corner on 86 minutes.

Posh had more appeals for a penalty turned down before Cargill nearly put through his own goal as the action swung from end to end. O’Malley then denied Watson with a smart stop as four minutes of injury time was indicated.

Incredibly Posh got themselves level deep into stoppage time as substitute GODDEN tapped home a fine cross from Cooper after Maddison and Toney combined. To determine the extra point in the competition, the tie went to penalty kicks and it was Alex Woodyard who was the only man to miss, his spot-kick well saved by Moore.