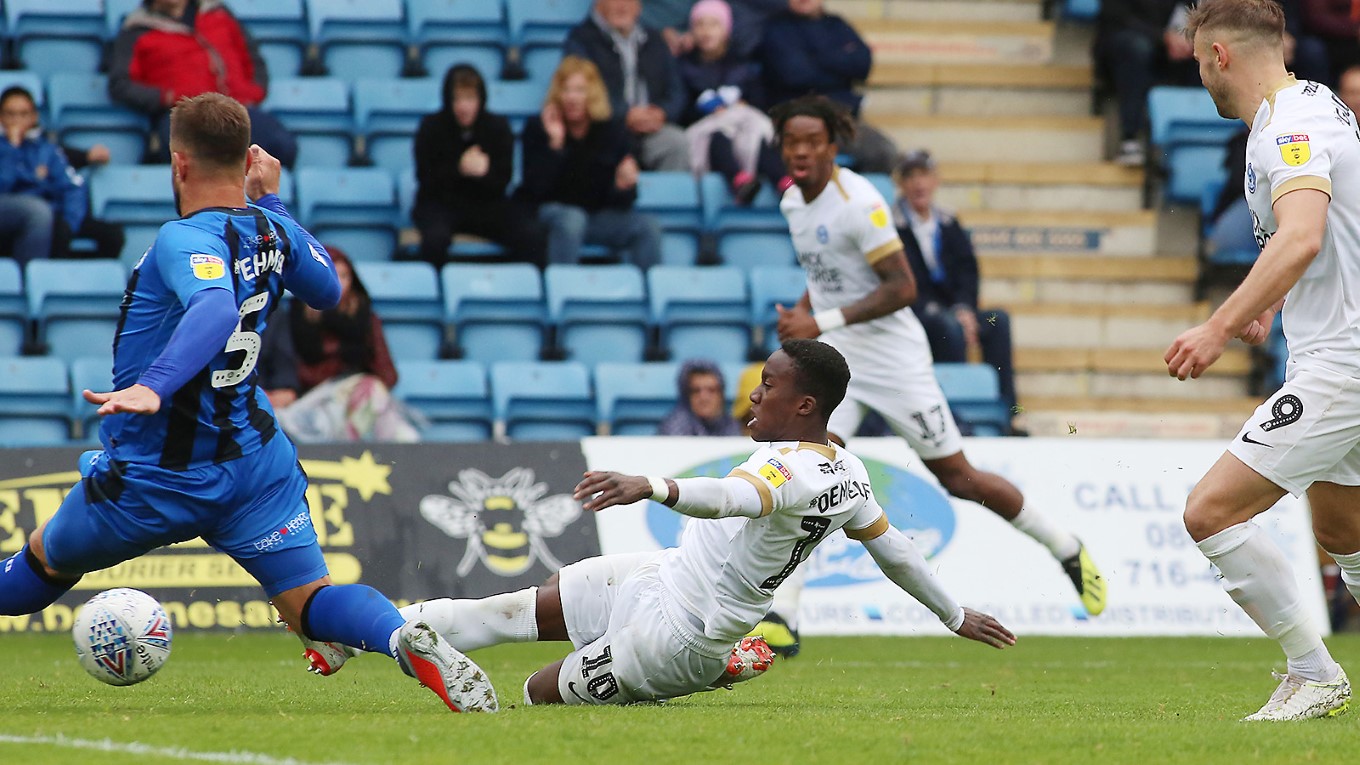 Match report for Gillingham vs Peterborough United on 22 Sep 18

Posh return to winning ways with a 4-2 success at Gillingham on a wet day in Kent.

Peterborough United showed tremendous character as well as quality at a soaking wet Priestfield as Steve Evans recorded a fifth straight away League One victory (for the first time since 2009) with a 4-2 success against Gillingham.

Jamie Walker, Siriki Dembele, Ivan Toney and Callum Cooke were the men to get on the score-sheet, the last two goals superb in different ways, Toney curling home a stupendous effort into the top corner while Cooke finished off a flowing counter-attack.

Posh had a wonderful chance to break the deadlock on nine minutes after a sweeping counter attack, Maddison feeding Godden who in turn spotted the run of the onrushing Walker from centre midfield, his low shot was saved by the legs of Holy before being hacked clear by Ogilvie.

Marcus Maddison then saw a curling effort tipped around the post by Holy and from the resulting set-piece, the keeper excelled himself again as he somehow kept out a Jason Naismith header after a well worked corner kick.

Aaron Chapman then took centre stage, making a triple stop to deny Hanlan with his feet, then to get back and scoop a looping deflection away from danger before he denied Byrne with his legs by the near post.

Parrett was cautioned for a foul on Dembele by referee Mr Swabey. Walker was next to test Holy, this time from distance, but the keeper was equal to the skiddy effort from 25-yards.

The deadlock was broken on 23 minutes and it was a fine Posh goal, Naismith and Maddison combining to nod into the path of Godden, his low cross was flicked into the path of WALKER by Toney and the midfield man fired past Holy and into the bottom corner.

Maddison saw a curling free-kick beaten away from danger by Holy moments later after Toney was felled. Both Bennett and Tafazolli suffered a head injury following a collision on 38 minutes and after lengthy treatment, thankfully both were able to continue.

Parrett fired wide of the far post from 25-yards once the game got back underway. Byrne was cautioned for a foul on 42 minutes by the match official. Toney headed a Maddison corner kick over at the near post moments later.

Posh had appeals for a spot-kick waved away as Dembele appeared to be pushed in the back before the same player dragged a shot wide of the near post after Godden’s shot was initially blocked.

Dembele was booked for unsporting behaviour deep into six minutes of first half stoppage time. Posh were forced into a change at the break with Tafazolli unable to continue following that head to head collision with team-mate Bennett, Josh Yorwerth his replacement.

Walker was cautioned in the early exchanges of the second period for a foul before there was another delay as Charles-Cook received treatment on his ankle. The hosts introduced Tom Eaves for the aforementioned Charles-Cook and from the resulting free-kick, REILLY lashed home an equaliser from the edge of the box.

The Gills turned this game completely on its head moments later as BYRNE fired home a low effort into the bottom corner from the edge of the box. Parrett saw a long-range effort beaten away by Chapman as the Gills kept pressing. Reilly was cautioned for a shocking challenge on Dembele on 55 minutes.

Dembele fired wide from 25-yards on 57 minutes as Posh tried to take a breath as this end to end game continued. Posh were level on 59 minutes as a fine pass from Maddison picked out DEMBELE who took a touch and saw his effort deflect past Holy and into the back of the net.

On 64 minutes, Posh got themselves in front with the goal of the game, Maddison started it with some superb defensive work, Naismith picked out Dembele, he in turn played it simple to TONEY but my word, what a finish, first time, top corner and Posh lead 3-2.

O’Hara replaced Walker on 71 minutes as Steve Evans made his second change. Fuller was booked for kicking Dembele after the referee had blown the whistle for a throw-in.

Manager Steve Evans was cautioned for dissent on 77 minutes by referee Mr Swabey. On 86 minutes, Posh scored another superb goal, this from a counter attack, Dembele, O’Hara and Maddison involved, the latter flicking the ball to substitute COOKE who left the defender on his backside before firing low into the net.

Seven minutes of added time was indicated by the fourth official as Bennett was forced off for more treatment but Posh clinched the victory.