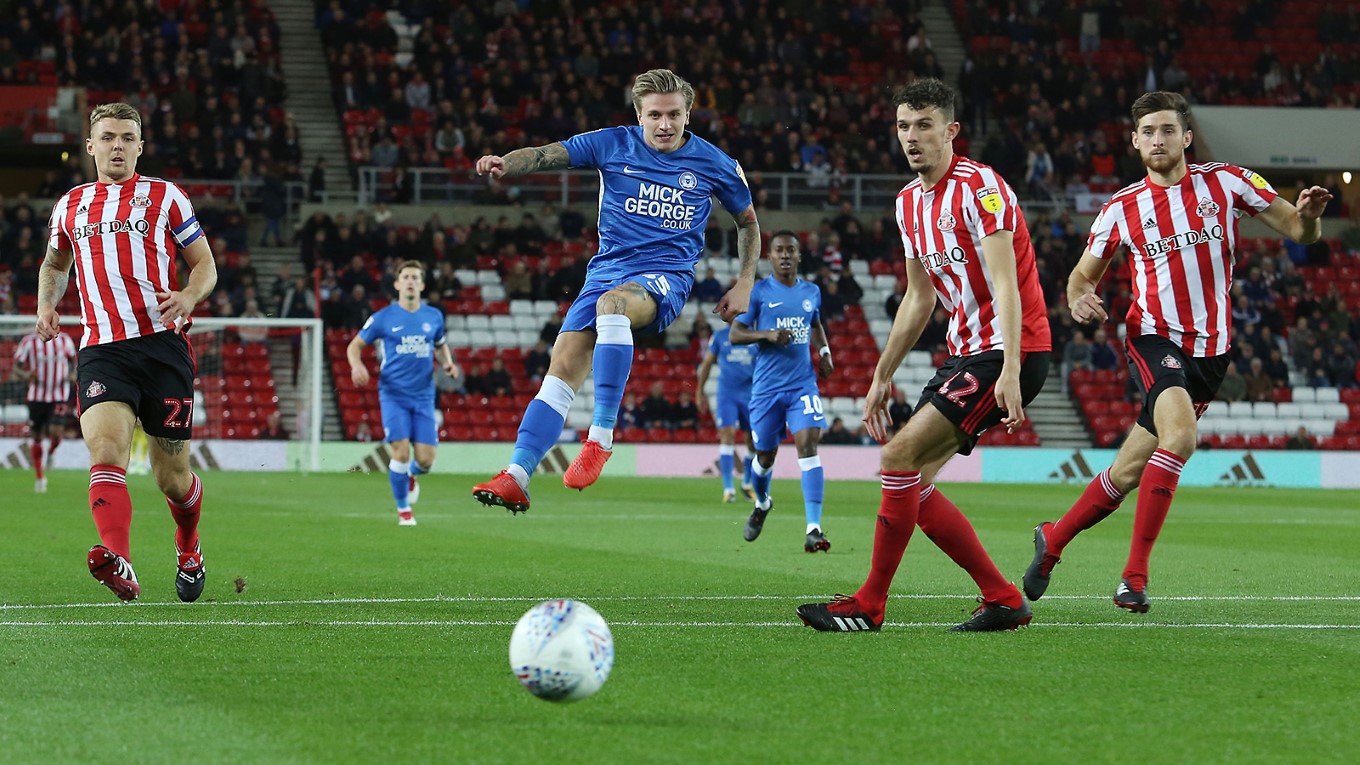 Match report for Sunderland vs Peterborough United on 02 Oct 18

Ivan Toney secures a deserved point for Posh after enthralling game at the Stadium of Light.

Peterborough United remain unbeaten away from home in Sky Bet League One after an entertaining 2-2 draw at the Stadium of Light against Sunderland with Steve Evans’ men dominant after the break, securing a point through goals from Joe Ward and Ivan Toney.

Ward, who continued the recent record of substitutes scoring goals, netted his first in Posh colours before Toney made it 2-2, latching onto a fine pass from another substitute Marcus Maddison.

Jason Cummings fired a snap-shot wide of the near post after a clever Ivan Toney flick inside the opening 60 seconds following a long clearance from Aaron Chapman. Oviedo curled a shot with his right-foot over the crossbar at the other end after a bright start from both sides.

The deadlock was broken on 20 minutes as striker Josh MAJA was afforded too much room in the box, he took a touch onto his left-foot and drilled a low shot into the bottom corner. Josh Power was cautioned for a foul on Dembele moments after the re-start.

Aidan McGeady fired over with his left-foot on 23 minutes after turning Naismith in the box as the Black Cats, with the wind at their backs, began to play with freedom. McLaughlin was called upon to deny Toney moments later after linking well with his strike partner Cummings.

McGeady headed wide following a flowing Sunderland move on 29 minutes which started at the feet of their keeper MccLaughlin. McGeady fired wide from 30-yards after getting away with a blatant shove on Dembele on 35 minutes.

Sunderland came close to a second on 41 minutes as a back heel from Maja picked out Sinclair, but he guided his effort wide of the target. One minute of added time was indicated by the fourth official and Posh boss Steve Evans was pleased to get his team into the dressing room after a difficult first period.

Posh made two changes at the break with Marcus Maddison and Joe Ward replacing Dembele and Cooke. Ward tested McLaughlin with a curling effort from 25-yards on 52 minutes before blazing a loose ball well wide of the target from the resulting corner kick.

Maddison was superbly denied by McLoughlin on 58 minutes after a good pass from Toney as Posh pressed. Sunderland were reduced to ten men on 67 minutes as Oviedo was shown a straight red card for a ludicrous kick out on Maddison.

Posh made their final change on 72 minutes with Matt Godden replacing Cummings. Posh drew themselves level moments later as Baldwin failed to clear a teasing Maddison cross and substitute WARD was there to lash home into the bottom corner from the edge of the box.

Godden found the side-netting after a spinning flick from O’Hara on 76 minutes. The home side got themselves in front completely against the run of play on 79 minutes as a low cross was controlled by SINCLAIR and on the turn, he fired high into the back of the net.

Posh got themselves level on 84 minutes and it was a fine goal in execution and finish, a delightful Maddison pass and a controlled finish from Ivan TONEY. Six minutes of injury time produced a nervy few moments for Posh but the side held on to remain unbeaten on the road.