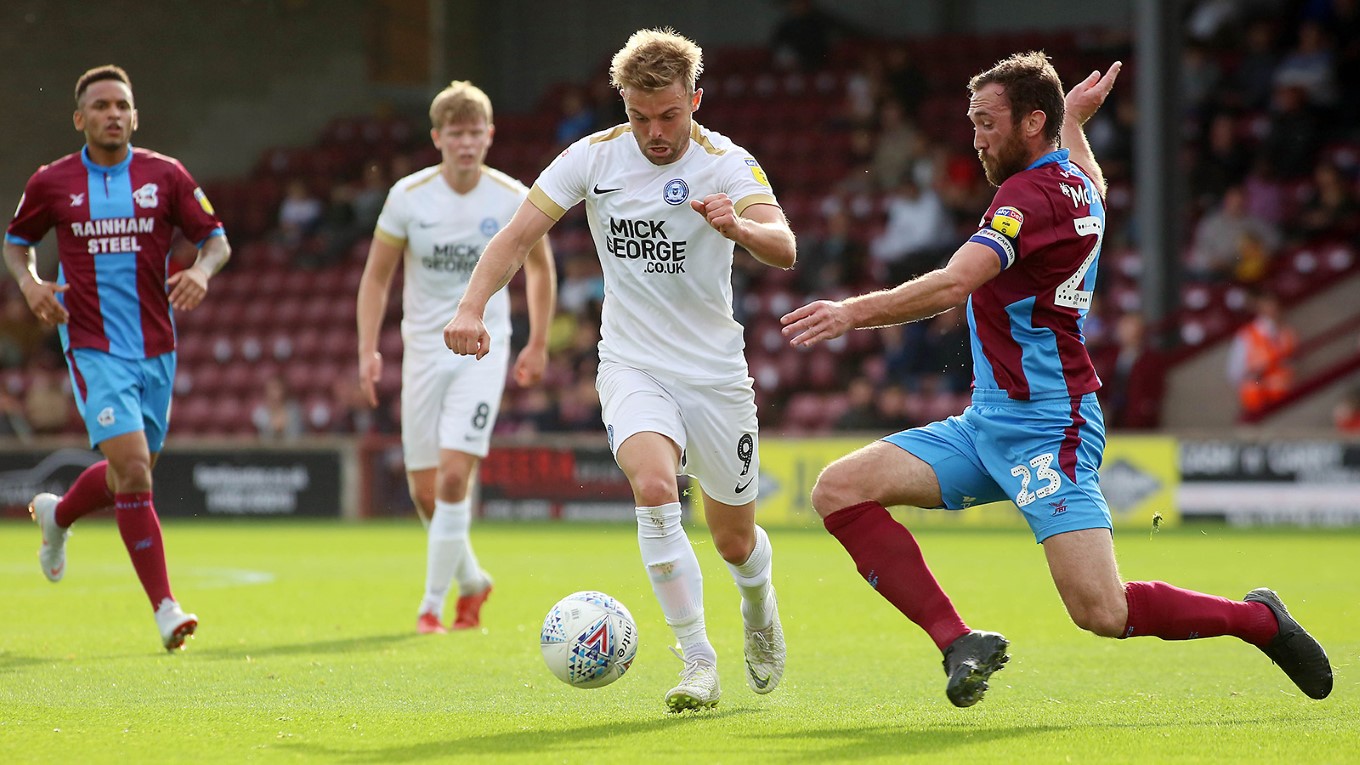 Peterborough United continued their fine run of form away from home with a comfortable 2-0 success at Glanford Park against free-scoring Scunthorpe United with striker Matt Godden taking his tally to 11 in all competitions with a brace against his former club.

Jason Cummings saw a scuffed effort gathered by Jak Alnwick by his near post on 13 minutes after evading the offside trap following some neat interplay between Godden and O’Hara in the centre of the pitch.

O’Hara saw a shot blocked after good hold-up play from Daniel and Cummings on 19 minutes as Posh continued to probe. Tafazolli saw a header go over the top moments later after a deep cross from Ward picked him out at the back post.

Ward fired well wide on the half-volley on 24 minutes after an intelligent knock-down from O’Hara in the middle of the park. Humphrys sent a lob into the side-netting at the other end after beating Chapman to the bouncing ball following a long clearance.

Chapman required treatment on 34 minutes after colliding with Humphrys following a bouncing ball, the striker’s lob went wide. Colclough fired wide of the near post with his left-foot on 42 minutes after cutting inside from the right as the Iron sensed an opening.

Morris guided a header over at the near post as the first half moved into three minutes added time. Chapman then denied Coclough as the Iron ended the half strongly but there was no breakthrough as Robert Lewis brought and to the first 45 minutes.

Morris found the side-netting moments after the re-start following a well-worked corner kick as Scunthorpe, kicking with the wind at their backs, made a bright start. The deadlock was broken on 52 minutes as a superb low centre from Colin Daniel was converted by GODDEN as he continues his excellent start to the campaign.

Borthwick-Jackson fired over from another well worked set-piece at the other end as Posh were again caught out by the low delivery. O’Hara guided a Cummings cross wide of the near post on 57 minutes. Just before the hour mark, Posh doubled the lead and it was GODDEN again against his former club, cutting inside onto his right-foot and his crisp strike squirmed through the gloves of Alnwick and into the back of the net.

Steve Evans made a change on 63 minutes with Ivan Toney replacing Cummings in attack. Chapman then denied Humphrys after the striker was allowed to cut inside onto his left-foot. Daniel and Toney were both cautioned in the final 10 minutes, the former for kicking the ball away.

Toney was then denied a goal against his former club by Alnwick, the keeper getting a touch to his toe-poked effort on the stretch. Dales then saw a shot from the edge of the box go over the top on 86 minutes. O’Hara was cautioned in stoppage time for a foul after Toney had seen a fine effort smothered by the keeper.