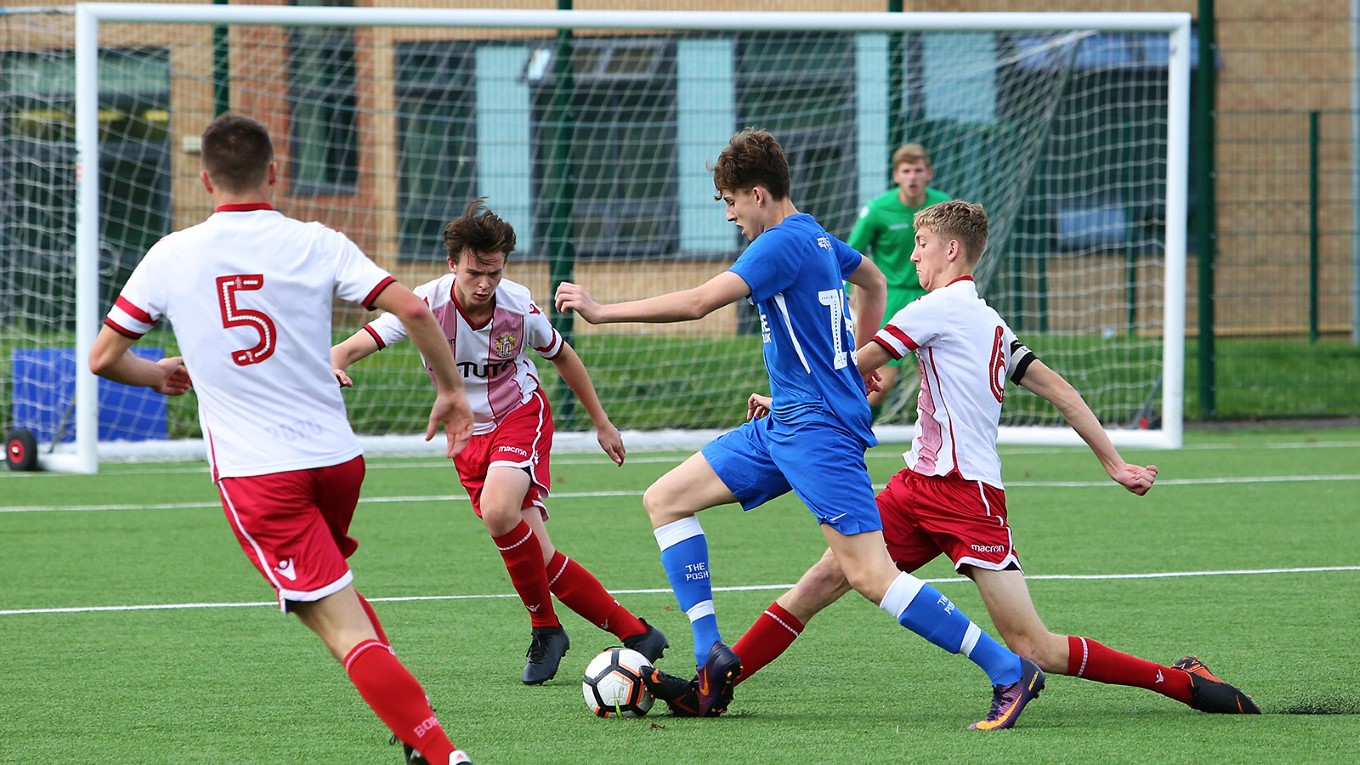 The latest from the Scholarship programme.

On Wednesday 17th October, the Peterborough United Sports Scholarship played their first home game of the season against an unbeaten Stevenage side at the Mick George Training Academy.  On home soil, Posh showed good resilience in the first half to soak up the Stevenage pressure and come in at half time 0-0 against a side that had won their all of their previous games.

In the second half, Posh started to compete more but despite a positive start to the half, Stevenage punished Posh with a goal from inside the penalty area. Following the goal, Posh reacted well and created chances of their own through Bayly and Denton and were unfortunate not to equalise before Stevenage further punished Posh with a couple of goals on the counter attack.

Despite the unfortunate result, Posh have a week off to regroup before resuming their league campaign at home vs Millwall on Wednesday 31st October.

Posh started the game on the front foot keeping the ball really well and frustrating Cambridge which then decided them to press. With Saywell in the posh side this suited him as he loves playing under pressure and would like to beat the defender. This happened a couple of times and helped for the first goal as Saywell beat his player for the defender making a last ditch tackle. However, from the resulting Kick in Posh scored a well worked set pieces through Munns.

With us still starting the stronger team playing some good futsal Cambridge replied soon after making the scores level. Posh knew they had been playing well, and fought to earn their lead back, good work by the Posh lead to a chance for Howarth and he took advantage.

At the half way stage Posh looked comfortable and the better side however knowing a lot of work still to be done. The Second half started and Posh started slowly however managed to get another goal from Munns who was excellent in and out of possession for the blues. Cambridge replied again and got themselves back in the game. But Harlow who was in the correct position in the right time managed to score a tap in for Posh at the back Post. The game was very competitive and towards the end of the end of the game Posh were seeing the game out looking after the ball and some good saves from Grypicz to deny Cambridge.

Posh started the game already beating Cambridge A and seem to go into the game with full confidence however Cambridge started on the front foot, pressing Posh really well to get the ball and stop Posh playing. The Blues struggled to get going in the first ten minutes and seem fatigued from the first game as they were last to every ball and Cambridge got their noses in front.

After half-time, Posh were left frustrated having the better of chances in the last ten minutes of the second half. Posh went out in the second half looking for the equaliser which left us vulnerable on the counter, however Grypicz was excellent and was making some outstanding saves. Posh got the equaliser as the fix William Palmer drove into the spaces and toe punted the ball into the bottom corner. Posh were left frustrated as a good second half performance wasn't enough to take all three points.