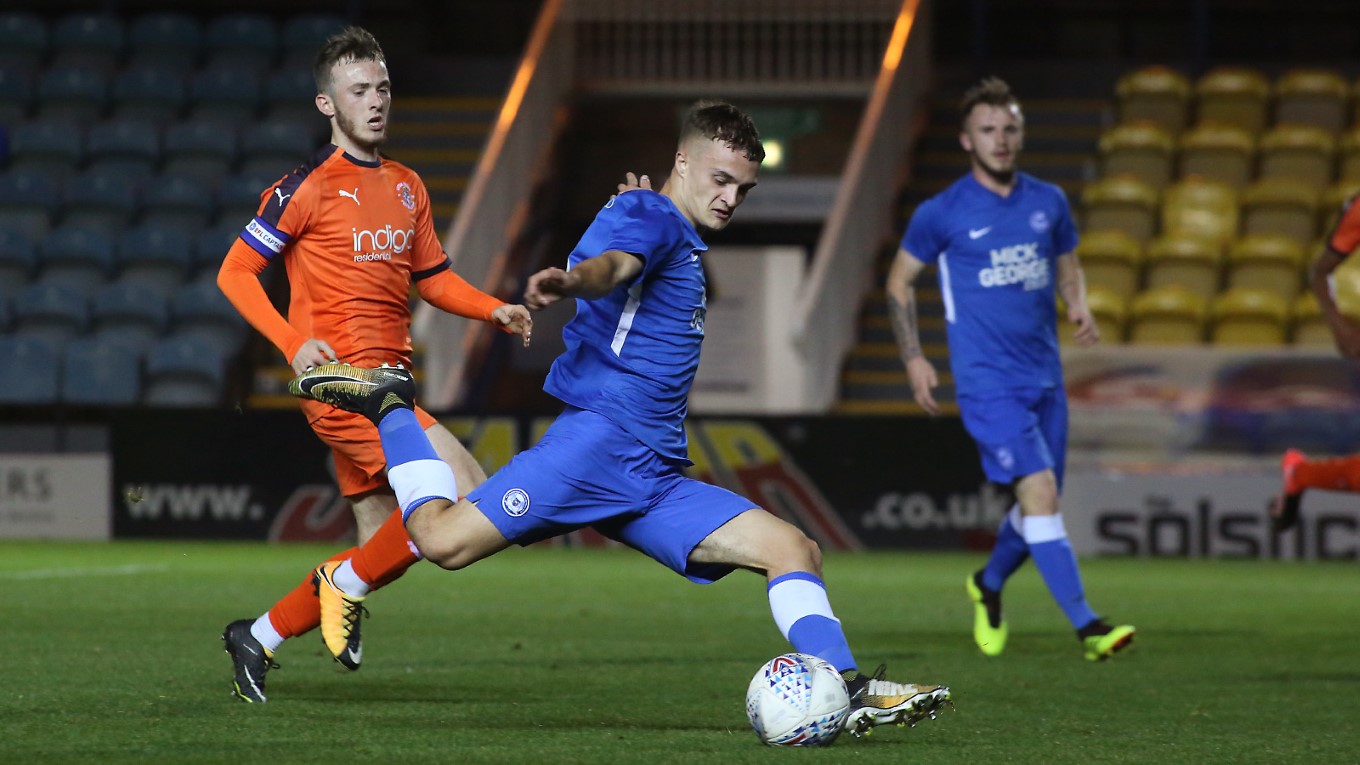 Posh Youngsters Cruise Into Third Round

Posh are into the third round of the FA Youth Cup after comfortable home success.

The Peterborough United under 18s cruised into the third round of the FA Youth Cup after a comprehensive 3-0 victory over Luton Town at the ABAX Stadium in front of just under 500 supporters.

It was an excellent display by the Posh youngsters who controlled the game from start to finish with goalkeeper Will Blackmore only forced into one save in the 90 minutes as the hosts out-fought, out played and out-thought their opponents.

Ricky-Jade Jones caused panic in the Hatters defence inside the opening minute and he was upended by Corey Panter who was cautioned by referee Mr Hancock. Flynn Clarke fizzed a low shot just wide of the far post as Posh continued to dominate the opening exchanges.

Jack Gurney tested keeper Tieran Parker with an effort from 25-yards which the Hatters shot-stopper did well to hold. Oli Shackleton then saw a shot blocked after linking well with strike partner Ricky-Jade Jones.

The deadlock was broken on 32 minutes as Gurney picked out striker SHACKLETON in space and he took a touch before drilling the ball past Parker and into the back of the net. Boorn fired wide at the other end after a slick Hatters move on 35 minutes.

Fosu was inches away from doubling the Posh lead three minutes from the break after a deep Gurney cross caused panic, the centre back toe-poking the loose ball agonisingly wide of the far post.

Panter cracked the crossbar from a well worked corner kick routine on 55 minutes as the Hatters came close to a leveller. Luton made their first change a few moments later with Sam Beckwith replacing Drew Richardson.

Ricky-Jade Jones used his pace to good effect on 58 minutes, but his low shot went wide of the near post with the visiting defence trailing in his wake. The same Posh player had the ball in the net less than 60 seconds later, but his effort was chalked off for offside after a bit of panic in the Luton defence.

Posh doubled their lead on 66 minutes as a free-kick was head back across goal by Garner and turned into his own net by WILSON-BRAITHWAITE. A weak back-pass from Fosu presented a good chance for Tomlinson but he fired over the bar with his right-foot.

Shackleton showed tremendous strength to win a 50-50 on 79 minutes and he picked out the marauding Burrows who saw his shot pushed around the post. Posh made it 3-0 on 83 minutes as a Gurney free-kick again caused panic, the ball was headed across goal and Mikkel FOSU fired home into the back of the net.